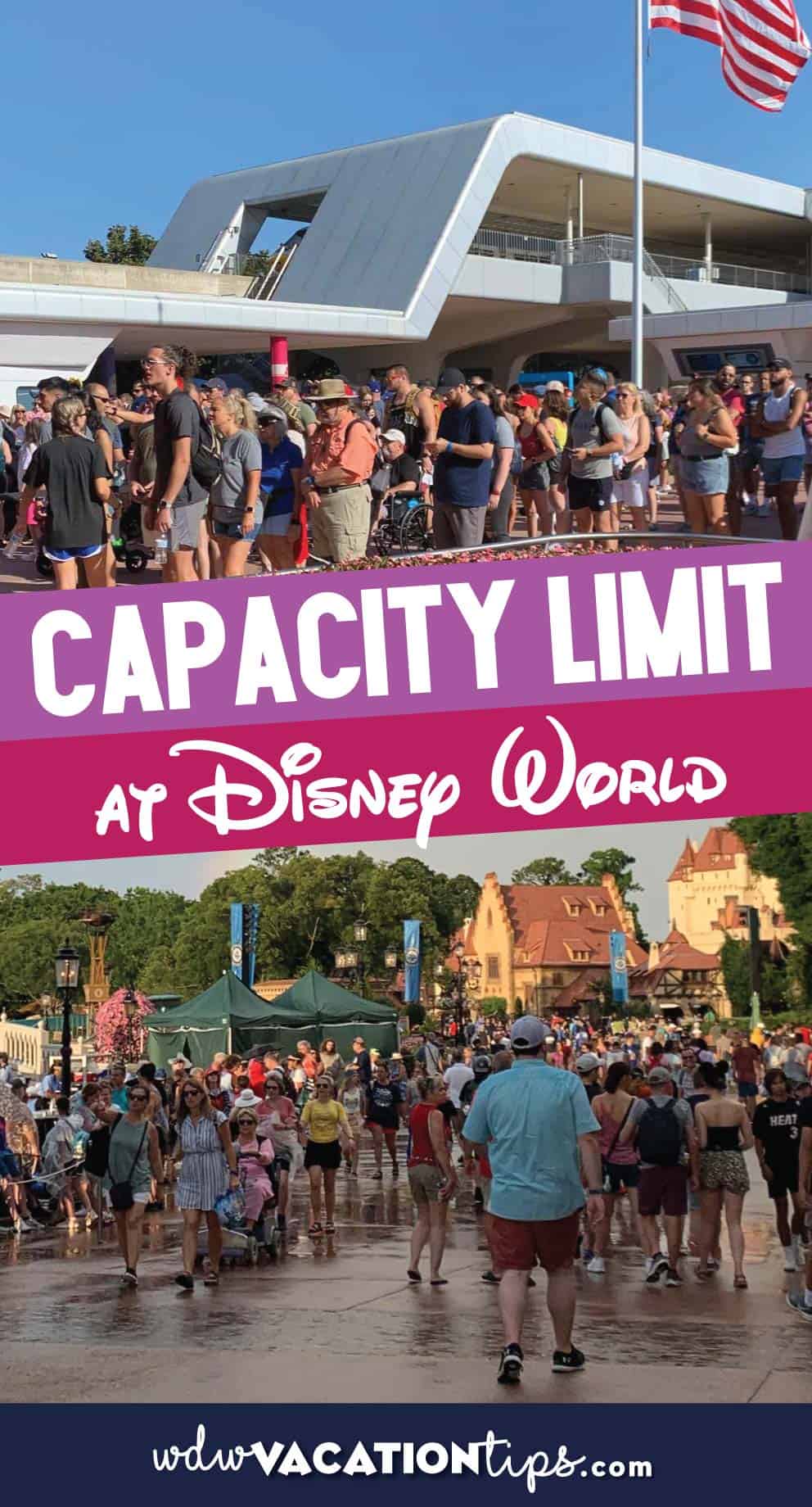 If you have watched the news, been online, and basically not living under a rock since Walt Disney World reopened after the pandemic, then you know Disney World is busy. Like super duper busy. Busy with a capital “B”. And you have heard a new ugly word: Capacity. This used to be something that typically was only mentioned around Christmas and the New Year when Disney World would have peak attendance.

Contents hide
1 What is Disney World Capacity?
2 Do All of the Parks Reach Capacity?
3 Why do the Parks Have Capacity Limits?
4 What to do When a Park That You Want is at Capacity?
4.1 Change your Tickets
4.2 Check out a Different Park
4.3 Opt for Disney Springs
5 Disney Parks Reservation System
5.1 How to make a Park Reservation
6 When are the Best Times to go to Disney World

What is Disney World Capacity?

Do All of the Parks Reach Capacity?

Typically, it is just the Magic Kingdom and Hollywood Studios that will reach full capacity. Thanks to the Disney Parks reservation system, you have the ability to know whether or not a park is full. Love it or hate it, it beats the old system of “show up and see”. Let’s be fair, Magic Kingdom wasn’t hitting capacity every day. The most infamous days of the year where you know the park will be maxed out are Thanksgiving, Christmas, and New Year’s Eve.

Look out for EPCOT this year! Since EPCOT is getting all the new rides and cool new restaurants, we’re starting to see the sleeper park filling up! This was a similar story when Rise of the Resistance opened in Hollywood Studios. The whole Galaxy’s Edge land has made Hollywood Studios the hardest park to get a park pass for.

Why do the Parks Have Capacity Limits?

Of course, Disney must have some sort of capacity limit in case of emergencies. Anyone who has tried to leave the Magic Kingdom right after the fireworks show knows how important this is. That’s a lot of people fitting through small areas.

Other than safety, Disney wants each guest to have a magical Disney day, and they recognize that if they allow the parks to overfill then their guests will be very limited to the entertainment that the parks provide.

This is important to note: Just because the park is busy, that doesn’t mean that you can’t have a magical time! The days are just done differently than less busy park days. Check out this article on things to do on especially crowded days.

Of course, most notably, Disney used park capacities to control crowds and population transmissions during the global pandemic of COVID-19. Disney never disclosed what its full capacity numbers were during this time, but the CEO Bob Chapek once said the parks were operating at around 35%. As of 2022, Walt Disney World is at full operations and not putting in any capacity restrictions due to COVID-19.

What to do When a Park That You Want is at Capacity?

You bought your tickets and now you have to make reservations only to find that the park you really wanted is full! Now what? First, and this is super important – Always be sure to check the park available calendar here before you buy your tickets. But let’s assume you forgot that step. Here are three easy options to save your Disney Vacation!

You can easily change the date on your dated Disney tickets BUT you may have to pay extra. You see, Disney charges a premium price for days that have a high demand. If you already have tickets but decide to choose a new day that has a higher demand, (as determined by Disney), you will have to pay the difference. If you are just moving your tickets a few days or a week, it is really likely that there will be no difference in cost and you can just switch them.

Check out a Different Park

You may have had your heart set on rope-dropping Slinky Dog Dash at Hollywood Studios, but since that park is full for that day and you can’t make a park reservation, you’re going to have to roll with the punches. Maybe try rope dropping the Kilimanjaro Safaris at Animal Kingdom instead, or maybe the new ride, Remy’s Ratatouille Adventure, in EPCOT, and then you can park hop to Hollywood Studios starting at 2:00 PM.  Parks are rarely ever too full to park hop too. So rare, in fact, that we have only seen it twice since the reopening in 2020, and that was during the times of reduced capacity.

Important to note: You will need a park hopper ticket in order to visit more than 1 park per day. When you purchase a park hopper, you are not able to purchase it for just one day, you must add it to all the days of your Disney trip.

So, you moved your Disney ticket to a different day, but you’re in Florida, so now what? Check out, Disney Springs! It is a shopping and eating district with a Disney touch that doesn’t require a park ticket to enter. If you come at night you will also get great entertainment. BONUS: Unlike Disney parks, Disney Springs has free parking.

Disney has gone on the record to say that they believe that the park pass reservation system is here to stay for the foreseeable future. With this system, Disney is able to more accurately predict the needs of the various parks based on capacity. They have also stated that they are using the input from the system to create demand pricing, much like what airlines do. Basically, days that have the most demand will cost more than days with low demand.

How to make a Park Reservation

Reservation system or not, we’re just happy to be skipping down Main Street USA!

When are the Best Times to go to Disney World

While it’s true that there is not a very “quiet” time in Disney World anymore, there are definitely times of the year that are better to go than others. Check out this article to see if the time dates you chose are a good time to go.

Best times of year to AVOID:

So to recap – most kids across the country are out of school + heat + torrential downpours + humidity… Still doable, but not the most fun time to be in central Florida.

If you are planning on going in the summer, don’t stress! We have articles on how to escape the heat.

What are your thoughts on the new reservation system?

I am a mother of three that has refused to grow up. Adulting is for the birds, so I go to Disney World every chance I get for that magical escape from reality. I believe that Haunted Mansion is the best ride in all of the Disney Parks, and I am fervently in team Happily Ever After for fireworks spectaculars, (sorry, not sorry, Enchanted). Finally, I hope I never grow tired of skipping down Main Street, USA, and my dream come true would be “friends with” the Fairy Godmother in my old age.