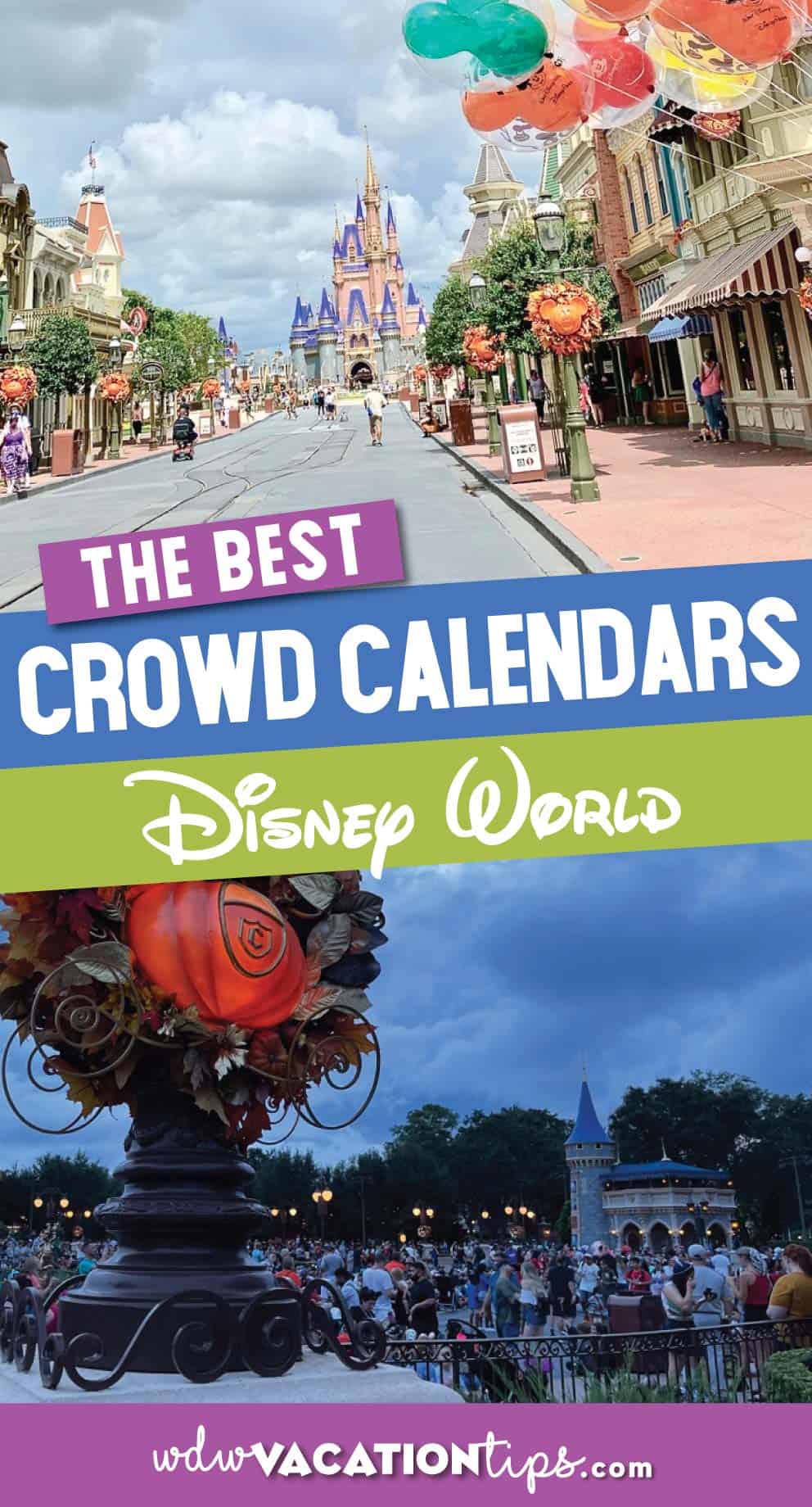 What is a Disney World Crowd Calendar?

A Disney World crowd calendar is a type of methodology that helps guests know when is the best (and worst) times to visit Disney. Crowd calendars examine all sorts of data, including previous park attendance rates, resort and ticket prices, holidays, and different promotions such as the summer and fall sales that offer 25% off room rates when booked during a certain period.

This data is used to make future predictions about attendance trends in the coming year.

Some popular Disney World crowd calendars are both Touring Plans (paid) and Undercover Tourist. These two calendars are based on a database of collected information.

We also enjoy the crowd calendars from the Disney Tourist Blog as well as WDW Prep School. These two crowd calendars fall into the category of well-thought-out opinions. Despite these two sites’ calendars not coming from a database of scientific information, we wanted to share them because they are two trustworthy Disney World opinions. Both teams have vast knowledge and frequent experience traveling to Disney World.

Unfortunately, many things. Let’s look at the COVID-19 pandemic as the best example. Since data from the previous year is looked at, it was very difficult to make predictions about what the crowds would be like in 2021 since the data from 2020 was so unpredictable, thanks to park closures, limited tickets, and travel restrictions. However, this example is the exception rather than the rule as pandemics aren’t usually a common thing.

Traditionally speaking, the most common factors that affect the reliability and accuracy of Disney crowd calendars has a lot to do with special events, annual passholder tickets, and in recent years, influencers.

Disney World holds a lot of events throughout the year. That, combined with the onset of new attractions and experiences at an almost unprecedented rate, you’d be hard-pressed to find a time to visit Disney when there isn’t something special going on. Here’s a list of all the special events happening in Disney World in 2022 (so far):

This, of course, doesn’t include everything that occurred in the latter half of 2021 that many people haven’t yet experienced such as the opening of Remy’s Ratatouille Adventure, La Creperie De Paris, and Space 220 in Epcot, as well as the new firework show, Enchantment in Magic Kingdom, KiteTails in Animal Kingdom, and Drawn to Life, the new Cirque du Soleil show at Disney Springs. Nor does it include special ticketed events such as Boo Bash or other festivities such as the park’s 50th Anniversary Celebration.

These events and attraction openings usually result in higher crowds, which can dramatically skew these numbers. Another factor that may affect Disney crowd calendars are annual passholders, as these not only have blackout dates but can fluctuate throughout the year. For example, many annual passes for out-of-state visitors were paused in late 2021 due to the influx of travelers over the holiday season.

Another more recent trend affecting the reliability of Disney crowd calendars is the rise of influencers. While Disney has always been synonymous with families, it has increasingly become more popular with millennials. I could see this shift a few years ago at the Disney Store (rip) when they started introducing cookware, jewelry, and fashionable adult clothing in the front of the store that appealed to adults, rather than the kids they’ve always marketed to.

Furthermore, with the rise of social media apps like YouTube, TikTok, and Instagram, there has been an influx of Disney influencers and creators spending time in the parks documenting all of the latest events and new merchandise for their YouTube channels and Instagram accounts. Disney themselves have taken advantage of influencers and use them as part of their promotion for these events, as well. With the addition of creators in the parks for grand openings, festivals, and other special occasions, this may inflate the number of park attendance, regardless of whether or not these individuals are riding rides or staying on property.

What Month is Disney the Least Busy?

Typically speaking, Disney World is usually less crowded during off-periods, such as right after the holiday season and the week after Labor Day when kids have already returned to school. However, with many children still taking part in remote learning, this allows families a little bit of extra flexibility to travel to Walt Disney World outside of summer and winter break.

While it may seem like a Disney crowd calendar won’t be too helpful, the opposite is exactly true. Even though the park attendance changes due to the factors mentioned above, it doesn’t change that much from year to year. The parks usually hit max capacity during the holiday season, especially during the week of Christmas. Special dates, such as the introduction of Enchantment and Harmonious saw increased attendance, and the first couple of months of Tron’s and Guardians of the Galaxy’s opening will see increased attendance at both Epcot and Magic Kingdom.

When it comes to booking your Walt Disney World vacation, a crowd calendar can help you make an informed decision based on previous data, and you can come up with your own plans after doing a little research on any upcoming events that may be taking place during your proposed dates. Even going during a crowded season, chances are, you probably won’t be waiting more than an hour for the majority of the rides. Plus, even if you are waiting, there are a lot of things to do waiting in line at Disney World that can pass the time.

Do you use Disney crowd calendars to help plan your trip? Let us know in the comments below and don’t forget to follow us on Instagram for all the latest Disney tips and tricks.