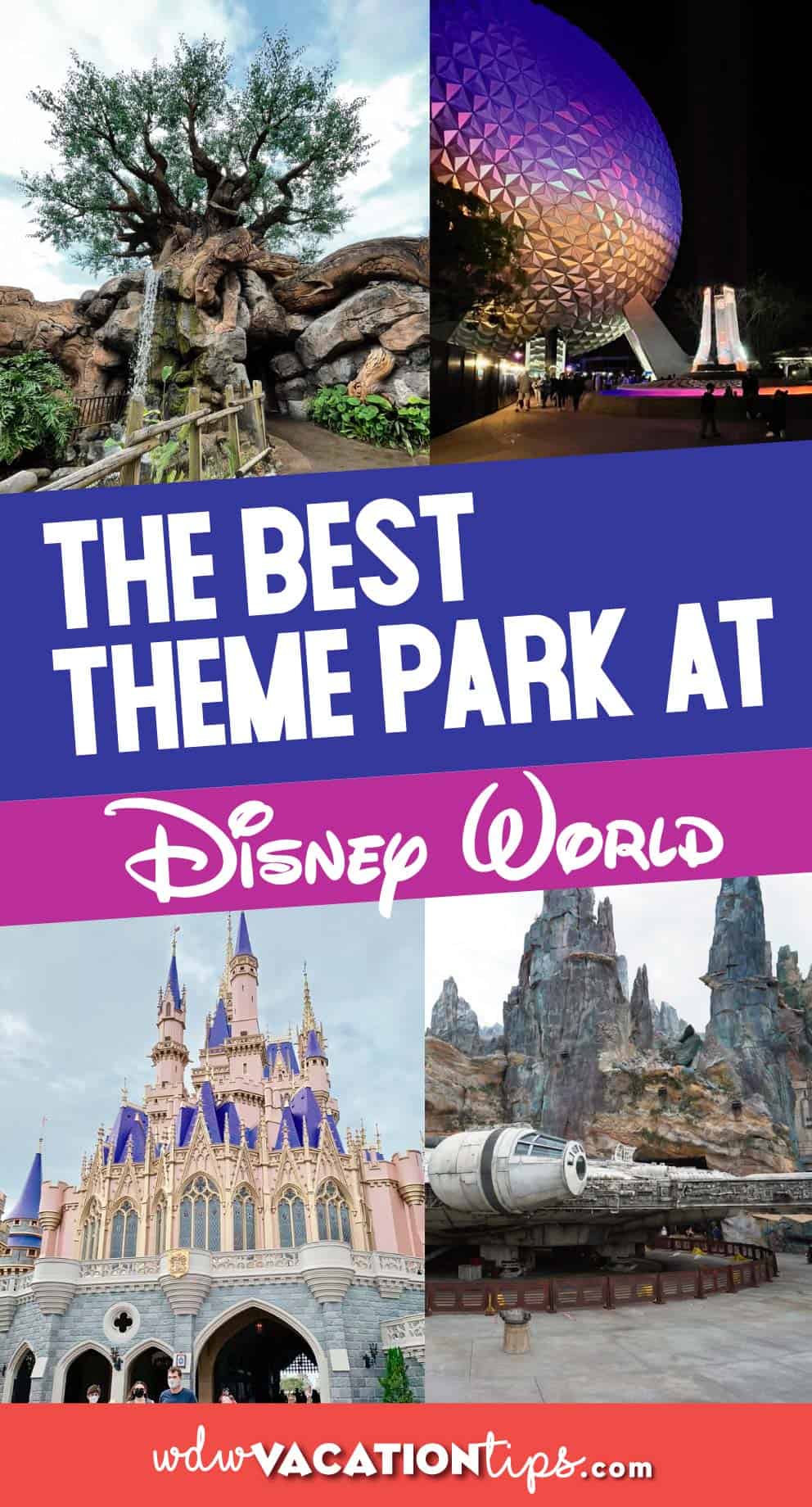 So you’re planning a trip to Walt Disney World – congratulations! Before jetting off to the most magical place on Earth, you have some questions about what you and your loved ones should do while you’re there. Which park offers the most rides? Which one is best for toddlers? Which park has the least amount of walking? I answer all of these questions and more in an effort to find out: What really is the best theme park at Disney World?

While I could easily make the argument that EVERY park at Walt Disney World is the best, it ultimately comes down to the ages and interests of everyone in your party. First up – which Disney park offers the most attractions?

Which Walt Disney World Park Has the Most Rides?

When it comes to determining which park at Walt Disney World offers the most rides and attractions, Magic Kingdom easily takes the cake. The original Disney World theme park has 21 different rides that are suited for all age ranges.

Epcot comes in second place with nine rides, while Disney’s Animal Kingdom and Hollywood Studios each have seven and nine rides, respectively.

Which Disney Park Has the Most Thrill Rides?

The good news is that you’ll find thrills at every Walt Disney World park you visit. We’ve provided a list of the most thrilling rides at each park below:

Honorable mention: It’s Tough to be a Bug in Discovery Island. While it’s not a thrill ride, this dark show surprises a lot of people by how scary it is. When the Cast Members usher you into the building, you’re asked to sit in the middle of your row. During the show, large animatronic spiders drop from the ceiling as a result of Hopper’s demands, which is why you’re asked to sit in the middle of the row. While the show is meant to teach audiences what it’s like to be a bug, it is not something I recommend for children (or adults) who are scared of the dark and/or bugs. I’ve been going to Walt Disney World for 30 years and it’s one of the most terrifying experiences I’ve ever had in all of my years visiting.

Read more: Disney World Rides that May be too Scary for Kids

Which Disney Park is the Best for 5 Year Olds?

While there is something to do for every age at every Walt Disney World theme park, parents will most likely get the most bang for their buck spending their day at either Magic Kingdom or Hollywood Studios.

Since Magic Kingdom has the most rides, they also offer the biggest selection for young children. At Magic Kingdom, the following rides don’t have an age or height requirement:

In Hollywood Studios, the following rides don’t have an age or height requirement:

While Hollywood Studios doesn’t offer as many attractions that are suitable for children of any age, they offer a slew of interactive shows and experiences such as Voyage of the Little Mermaid, For the First Time in Forever: A Frozen Sing-Along Celebration and Lightning McQueen’s Racing Academy. The park is also home to Toy Story Land and Star Wars: Galaxy’s Edge, both of which are some of the most immersive theming that Walt Disney World has ever offered guests.

Read more: Disney’s Hollywood Studios with Preschoolers in One Day

Which Disney Theme Park is Best for Adults?

In terms of the top Disney theme park for adults, Epcot has been long touted as the best. Epcot is split up into two sections: Future World and the World Showcase. While Future World offers up fun rides like Test Track and Journey Into Imagination With Figment, Epcot’s rides tend to be a bit on the educational side, which is primarily why Epcot gained the reputation of being a park geared more toward adults in the first place.

In addition to educational experiences such as Living With the Land and Spaceship Earth (two of my favorite rides in all of Walt Disney World, so you definitely shouldn’t miss out), what really makes Epcot stand apart from the other parks are their annual festivals. Each year, Epcot hosts the following festivals:

During these festivals, adults can sample cuisines and alcoholic beverages from all over the world. Epcot is also home to a number of fine dining restaurants in the World Showcase such as Le Cellier Steakhouse in the Canada pavilion and Monsieur Paul in the France pavilion.

Read more: How to Get Last Minute Disney Dining Reservations

Which Disney Park Has the Most Walking?

Every Walt Disney World vacation involves a ton of walking and unfortunately it’s not something you usually think about until your feet are killing you at the end of the night as you make the trek back to your room.

If anyone in your party has difficulty walking long distances or if you simply want to know how large the parks are before making a reservation, here is some important information:

Now granted, these measurements do account for rides and backstage areas so you won’t be walking all of it, but knowing how large these parks are can help you be prepared for how comfortable you should be while visiting. Always wear comfortable shoes and be sure to avoid flip flops, wedges and high heels (you’d be surprised by how often I see people wearing heels at Disney!)

A few helpful tips to keep in mind: The luxury resorts often have the closest bus stops at all of the parks, with the value resorts often being one of the furthest. When you’re booking your reservation, you have the option to request a room that’s closer to the front of the resort. If you have young children or anyone who has trouble walking long distances, call ahead to see if you can reserve a room that is closer to the front of the resort. If you’re using a travel agent, be sure to let them know up front of your requests so they can work their magic (pun intended).

Which Park Has the Most Character Meet-and-Greets?

Every Disney park has character meet-and-greets so it all comes down to which characters you and your family want to see the most. If your child has Frozen Fever and can’t stop singing Into the Unknown, (which, honestly, same) then Epcot is the best place for your family to visit. Not only can you meet Elsa and Queen Anna in the Norway pavilion in the World Showcase, but you can also ride Frozen Ever After, a log flume, dark ride that allows guests to revisit the story told in the original movie.

If your favorite character is Winnie the Pooh or any of the other members of the Hundred Acre Wood, Magic Kingdom is the spot for you. Not only can you dine with Winnie the Pooh, Eeyore and Tigger at the Crystal Palace, but you can also get your pictures taken with them at the exit of The Many Adventures of Winnie the Pooh in Fantasyland.

Editor’s note: Due to the current Coronavirus, character meet-and-greets and various character dining experiences have been temporarily suspended. However, you can still see your favorite characters in various calvacades and socially distant photo spots across the parks.

You can also see your favorite Star Wars characters in Galaxy’s Edge including:

All of the cavalcades in Animal Kingdom take place in boats that can be found in Discovery River at various points throughout the day.

So which one is the best? The answer depends on what you’re looking to get out of your Walt Disney World vacation. If you have young children who want to spend all day on rides, then Magic Kingdom is probably the best park to do so. If you have teenagers or members in your party who are obsessed with Star Wars, then a day in Hollywood Studios is perfect! If you and your spouse are celebrating your honeymoon or a quick anniversary weekend, then Epcot might make most sense.

Ultimately, when it comes to planning your Walt Disney World vacation, there is no such thing as “the right park” because all of them offer up unique experiences that will make every member of your family happy. With the tips we provided above, we hope made your decision making easier. Just know that whichever park you choose, you’re going to have a magical time!