Walt Disney World attracts guests from all over the world for all kinds of reasons. Aside from the magnetic draw of Disney’s breakthrough and classic attractions, the immersive themed environments, and the sheer scope of activities and entertainment available, increasingly food has become one of the resort destination’s largest draws. Whether you like themed dining or fine dining, there are restaurants to satisfy every niche.

Celebrity chefs at Disney Springs turn restaurants into must-do experiences while food trucks capture a whole different audience. From Oga’s Cantina to Be Our Guest, Disney entertainment has infiltrated the dining at Disney World. There is a degree of expectation where restaurants have become attractions. Fastpasses can only be scheduled out 60 days in advance, but dinner reservations come 180 days ahead of time. The two examples mentioned above have some pretty strange Disney World snacks. These have now become another draw for foodies, YouTubers, and Instagrammers alike.

Snacks at Walt Disney World have always been iconic, traditional, and unique. Who doesn’t have to get a Mickey Mouse ice cream bar every time they go to the Magic Kingdom? What about the Dole Whip, or the infamous Turkey Leg? As Disney becomes more popular for its food offerings and more adept at supplying continuous fodder for social media influencers, some exciting and strange Disney World snacks emerge from time to time. 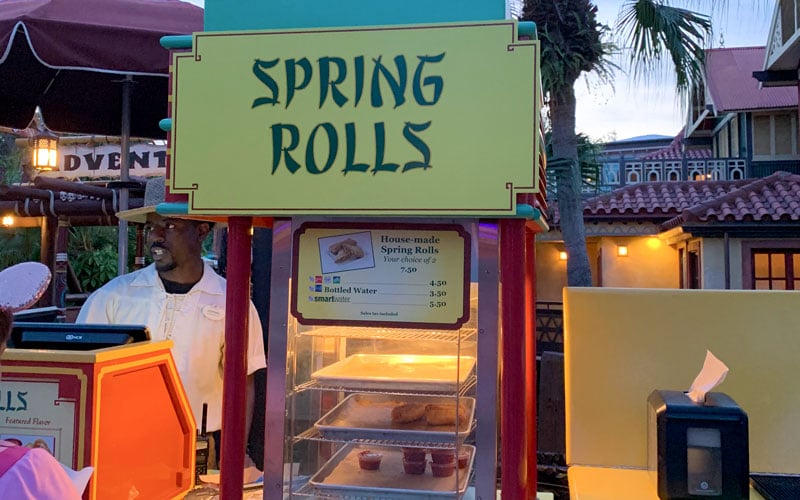 These are ingenious little snacks found in Adventureland. Whether you subscribe to fried or unfried spring rolls, a cheeseburger is probably not among your expected fillings. Yet at Walt Disney World, anything is possible. You can have a cheeseburger as a spring roll. Not only that, it’s good. These strange Disney World snacks are come and go, but they are always popular when you can get your hands on them.

Key Lime Pie on a Stick

On a list of things I’d never expect to eat in stick form, pie would come just after soup. Yet, at the Neighborhood Bakery in Disney’s Hollywood Studios, you can get an on-a-stick key lime pie. The $5 treat is the most unique snack on the menu. Not to mention one of the zaniest snacks at Walt Disney World. On top of the unique concept, the pie has an unusual look caused by a blue coating. It’s the bizarre coating, which makes the on-a-stick aspect of the snack possible. 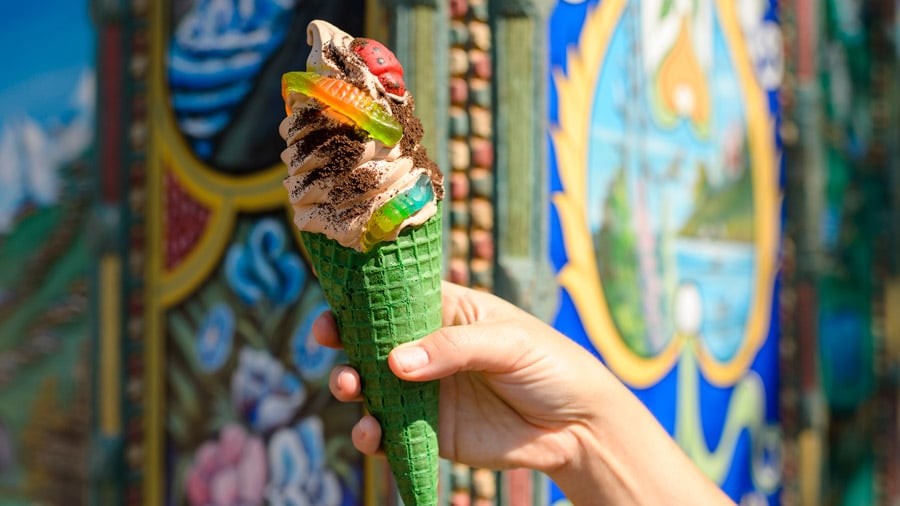 When crushed OREOs met gummy worms for the first time, an underrated partnership was born. Overlooked in a sea of popular combos like peanut butter and jelly, peanut butter and chocolate, or peanut butter and apples, the worms-in-dirt pairing has remained a tried and true subversion of appetizing treats beloved by children everywhere. When you add to that some chocolate soft-serve and one of Disney’s new color-treated waffle cones, you have a fun Lion King-inspired snack served at the Animal Kingdom. 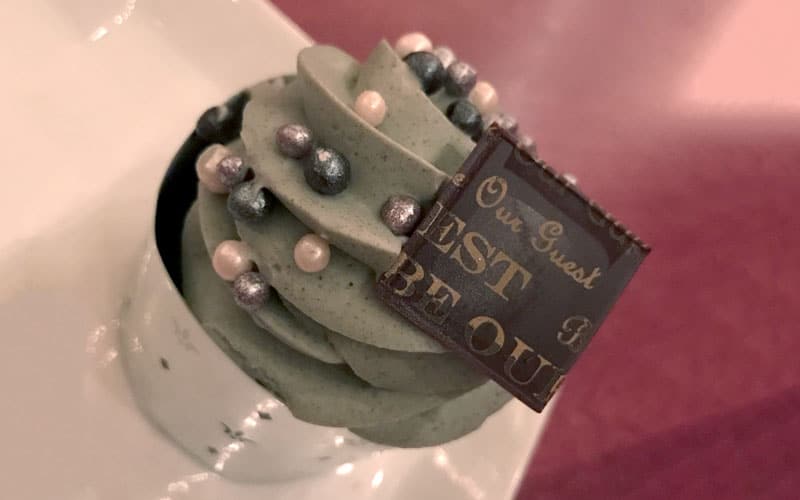 When it comes to snacks themed to films from the Disney Renaissance, there is nothing stranger or more appropriate than the grey stuff. Just the idea alone is bizarre, but in some weird way, it can’t not be a thing. It doesn’t really matter what the grey stuff is or what it tastes like. What matters is that it’s there. Also, it’s delicious, just ask the dishes!

This cupcake can be found at Be Our Guest Restaurant in the Magic Kingdom for both lunch and dinner.

There are a couple of reasons these cupcakes are such strange Disney World snacks. One is the location. The Orange Bird is iconic to some degree, but really the Sunshine Tree Terrace Mascot has long been overshadowed by the citrus swirl’s pineapple cousin at Aloha Isle. Lots of incredible things are being done in the Dole Whip category right now, but none of them are exactly strange. What is strange is the seemingly random and more or less abstract interpretation of the Orange Bird found at the Artist’s Palette in Saratoga Springs. 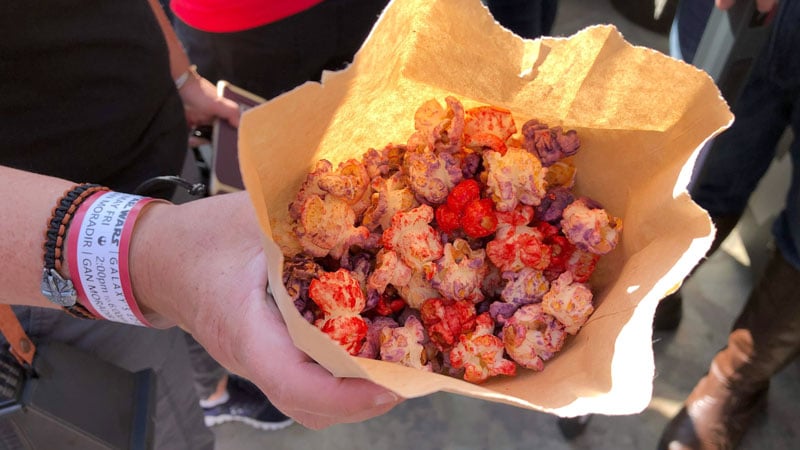 While different varieties of the kettle corn at Galaxy’s Edge could be considered strange Disney World snacks, the Chocolate Popcorn is special. It is even more unique than other kettle corn snacks. It also has a more obvious tie in with Star Wars than simply getting the word galactic tossed in front of it for theming. That last part doesn’t speak to the strangeness of the snack so much as it helps illustrate why it is a win for Galaxy’s Edge. The chocolate Popcorn snack has a saltiness to it, courtesy of red salt from Crait. 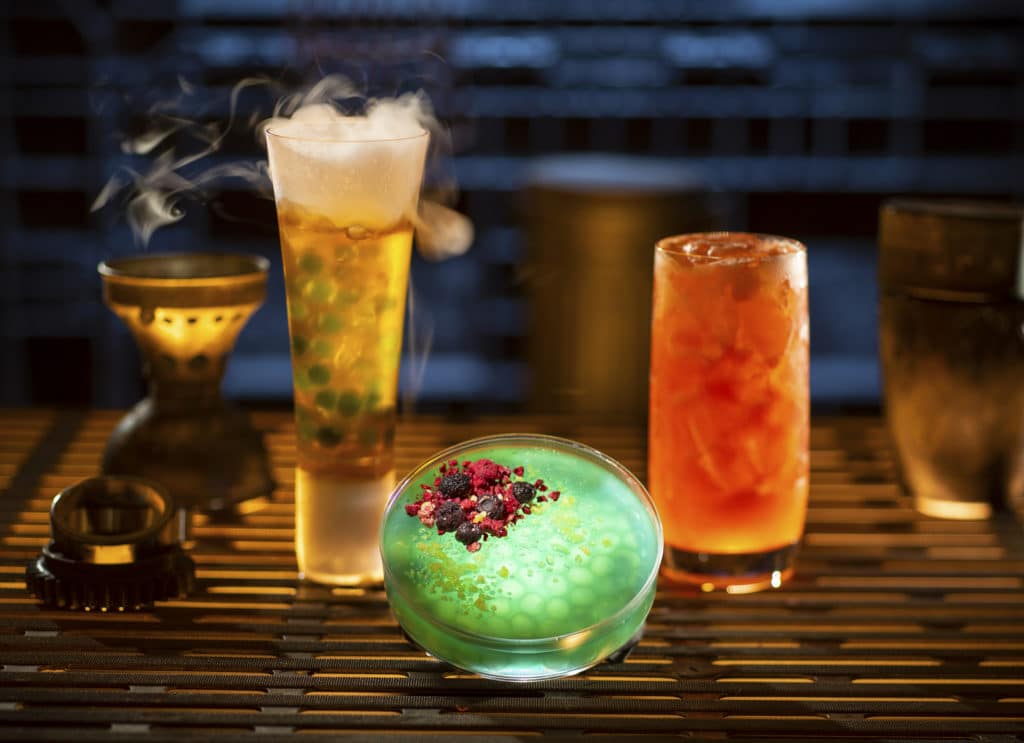 Another Galaxy’s Edge offering that really epitomizes strange is Oga’s Obsession. Everything about this dish is weird. It’s served in a petri dish for a start. The green gelatinous substance gives a slimy consistency that is amplified by popping pearls and offset by chewy dried fruit and crackling Pop Rocks. This is one of the very few food offerings available at Oga’s Cantina, which is primarily a watering hole full of specialty libations.

Finally, the Turkey Leg. This innocuous staple is so strange, it has sparked rumors about its true nature. The salty taste led many to believe it was actually ham, despite the obvious fact that in no way would that ever be acceptable. More recently, the rumor has spread around the internet that the meat comes from Emu. That rumor was inspired by the shocking size of the turkey leg compared to what you are used to seeing at Thanksgiving. Neither of these rumors is true, and emu legs are much, much bigger. The strange truth about these legs is that they come from male turkeys, which are much larger than the female turkeys that are more commonly sold.

Do you have a must eat snack on your Disney World vacation? Let us know what it is in the comment section below!