September is a great time to visit Disney World plus it also typically the start of free Disney Dining plan promotion. The temperatures are still a little warm but the crowds are low. The best part is you can enjoy the low crowds and still get to experience Halloween time at Disney World as well as Epcot’s Food and Wine Festival. The following are some more things to expect at Disney World in September.

The Weather in Disney During September

September is the 4th hottest month, with the average temperature being 87 degrees and 4th wettest month with five inches of rainfall on average. As expected coming off of the summer months it begins as a rainy and hot month and ends much cooler and drier.

Just as in the summer months it’s a good idea to dress in light colors and wear comfortable shoes. Since the temperatures are hovering right below the 90s we recommend bringing a small portable fan. Due to rain being commonplace in this month I bring a poncho for each person and a stroller cover.

Mickey’s Not So Scary Halloween Party

Celebrate the soulful strains of gospel, pop, hip-hop and more at our Christian concert weekend, September 8 and 9, 2017! This is a separately ticketed event hosted at the Magic Kingdom. You can get more details on who is playing and buy tickets at DisneyWorld.com. 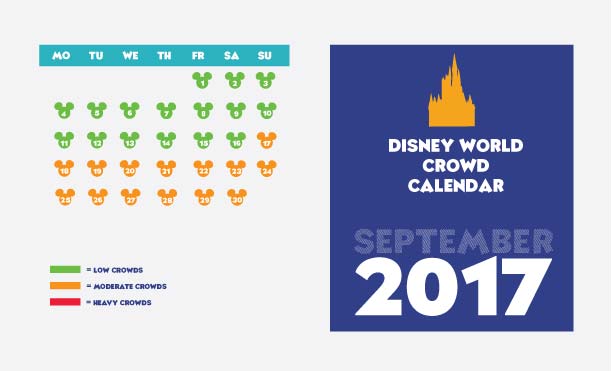