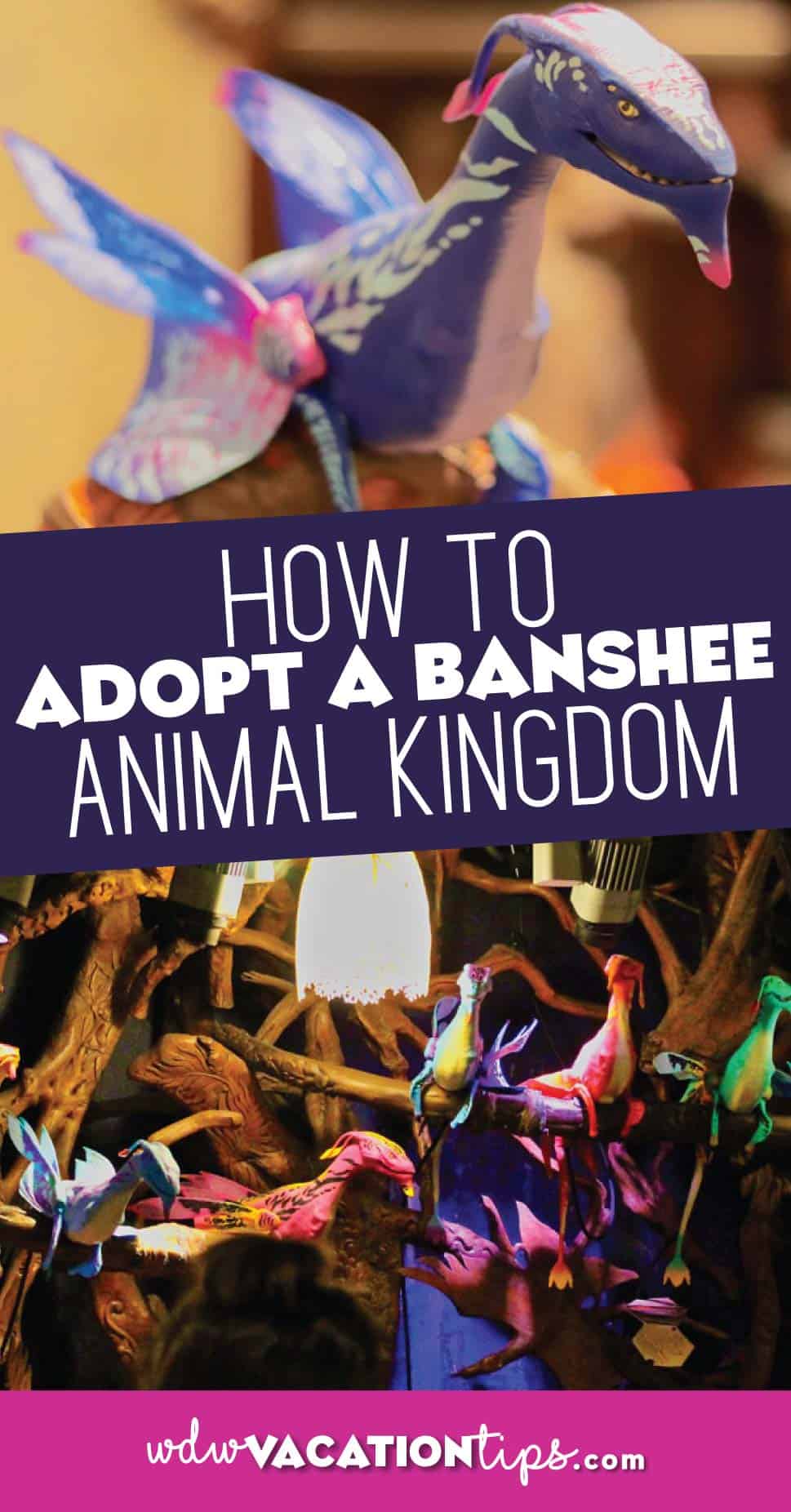 With the opening of Pandora at Disney World’s Animal Kingdom came some all-new Disney shopping experiences. At the Windtraders shop in Pandora, the World of Avatar you can adopt a  Banshee. Best of all they even let you bring the Banshee back with you to Earth.

The Banshee is meant to be worn around with you perched on your shoulder but you can also get a perch for it as well. The hand control that comes with the Banshee lets you move its head left and right as well as open his mouth and move the wings.

What is an Avatar Banshee Animal

First off if you missed the movie Avatar you may be wondering what this creature is! The banshee played a big role in the movie as it is very important to the Na’vi. And to back up, even more, the Na’vi are the indigenous inhabitants of Pandora. The Na’vi call the Banshee an ikran in their Na’vi language. Each Na’vi hunter forms a lifelong bond with an ikran, it’s like a right of passage in their culture. In the movie you these this Banshee animals used for hunting from the air and traveling or even for battle.

Adopting a Banshee on Pandora

There is a short adoption process once you have chosen your Banshee. You have to bond with your Banshee before you can take it home. This consists of going over how the controls work. Then comes the Banshee Pledge!

By carrying my Banshee I promise to both respect and protect the natural world here on Pandora and back home on Earth.

Once you have completed your pledge you will get to check out. This is where you also get your special shoulder pad so you can wear your banshee around on your shoulder. It’s basically like a magnet that helps hold him in place. Plus you get this pretty awesome storage box for your new family member it sorta looks like a suitcase. Once you receive your Avatar Banshee you will learn to control its head, neck and wing movements and activate its call.

This section was packed when the World of Avatar first opened up and they had sold out of Banshee! Fear not, all the Banshee options have come back in stock in the parks and now we find the lines are much shorter.

Other Places to get a Banshee at the Animal Kingdom

This spot requires no theme park admittance, though it will cost you to park at the Animal Kingdom itself. The Banshees sold at The Outpost Shop are available in only three color options: a blue and purple version, orange and red version, and purple and blue version. You can also pick up their special perch here for $24.99.

This store is located on Discovery Island right before the entrance to Pandora itself. I am not sure why they decided to add them so close to Pandora but they did. It’s a similar setup to the Rookery at Windtraders compete with an open display and Banshees perched on branches.

At last, Disney let up and allowed you to buy a Banshee via their website shopDisney.com. They have five different color options to choose from and cost $84.99 for the set. You can order your Banshee here.

Color Options for the Banshee

Currently, there are 10 color variants of the banshee toy (12 if you include the 20th Anniversary of Animal Kingdom edition and the Pandora First Anniversary edition).

This Banshee is colored after the brightly glowing forest found on Pandora. It is a limited-edition offering that was released for Pandora’s birthday in 2018.

With colors inspired by a moss-covered wall from Pandora The World of Avatar, a new interactive banshee flew into the Rookery at Windtraders. Of course, this is all in time to celebrate Animal Kingdom’s 20th anniversary.

We thought we may see another limited edition Banshee for Avatar the World of Pandora’s 5th birthday but nothing has shown up yet.

Discounts on a Banshee

The price to adopt a Banshee is $69.99 and no discounts are applicable. However, the perches for the Banshees are $14.95 and can be discounted (annual pass, cast member, etc.). Perches are obviously not a mandatory purchase with any Banshee.

In the past, Disney Annual Passholders have had special shopping events offering a discount on these creatures. The most recent event was on Sunday, December 9th. Annual Passholders received early access to the Animal Kingdom from 7:30 a.m. to 8:30 a.m. and a 20 percent discount on all Banshees at Windtraders.

Also, a new special surprise discount this year, those who dined at Satuli Canteen through December 3rd received a 15 percent discount on the Banshees.

Have you experienced the joys of adopting a Banshee on Pandora? Let us know all about it in the comment section below!

I need to purchase the perch. Where can I order it online?

No longer on shopDisney so ebay is your next best bet.

This article says we can buy a banshee on ShopDisney, but a search on that site yields no options to buy one.

They have been on in the past they come and go on Disney's website.