If you are planning a vacation to Walt Disney World it is only natural to wonder what the crowds are going to be like for the dates you will be there. This is where the importance of a Disney crowd calendar comes in. For my family crowd levels were always a huge deciding factor on when we would pick to go. It seems the growing trend is that the fall months are getting busier at Disney than they were in the past and in turn the summer months are starting to be less crowded than they used to be.

Why do people want to avoid the crowds at Disney? Crowds at Disney mean longer wait times in line, hard to find good dining options and causes you to get less of what you wanted to do on your vacation.

It’s important to remember that the following information is just a prediction based on historical data, Disney events, holidays, school vacations, as well as years of experience visiting Disney World.

January at Disney World can best be described as relatively light crowds with perfect temperatures. The downside to this time of year is that there are often several major refurbishments taking place due to the light traffic. So in order to prepare yourself for any closed attractions, you may face we recommend reading through our Disney World refurbishment and closure list. 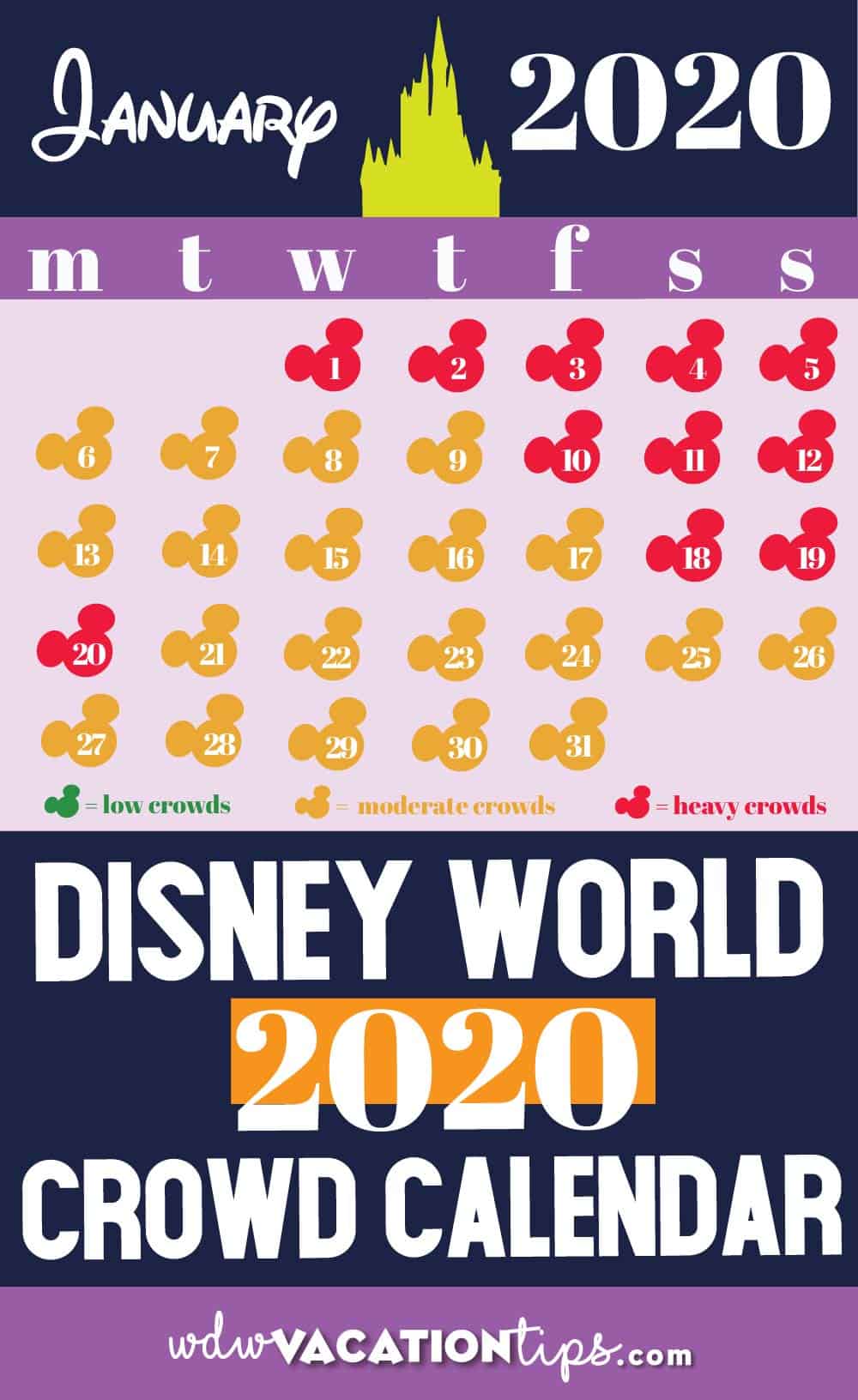 January 1-5 – New Year’s Eve and New Year’s day draw in the crowds year after year. Many people take a vacation or simply get this time frame off of work. Plus it is school vacation pretty much across the country.

January 8-12 – RunDisney hosts it’s Annual Marathon Weekend. Thousands of people arrive to run in the race events throughout the weekend. Note that we find attendees often linger for a couple of days before or after the event to enjoy the parks.

January 18-20 – Holiday Weekend makes for busy crowds on any given year crowds pick up due to the 3-day weekend for Martin Luther King Day. Many people go to Disney World during this time expecting light crowds, but it’s actually one of the busiest times of the year. Disney has coupled this holiday weekend with the kickoff for the Festival of the Arts in Epcot which also draws in locals for opening weekend.

January 24-27 – A newer Orlando event, the Pro Bowl, draws in some heavier than normal crowd levels. As Pro Bowl fans arrive for the weekend we find heavier crowds at the park. Note that the Pro Bowl takes place at Camping World Stadium which is about 40 minutes (depending on traffic) north of Disney World property.

I like to think of this month as the calm before the Spring Break storm. This isn’t to say this month doesn’t have its own share of busy times though. Avoid Presidents Day weekend (2/15 – 2/17) at all costs most people don’t really consider this a holiday as not everyone has it off, but it’s out to trick you! President’s Day at Disney World is packed! The following weekend you will need to watch out for the increased crowds during the Princess Half Marathon. These two-weekend events make me recommend you to just avoid the whole week in-between as well. 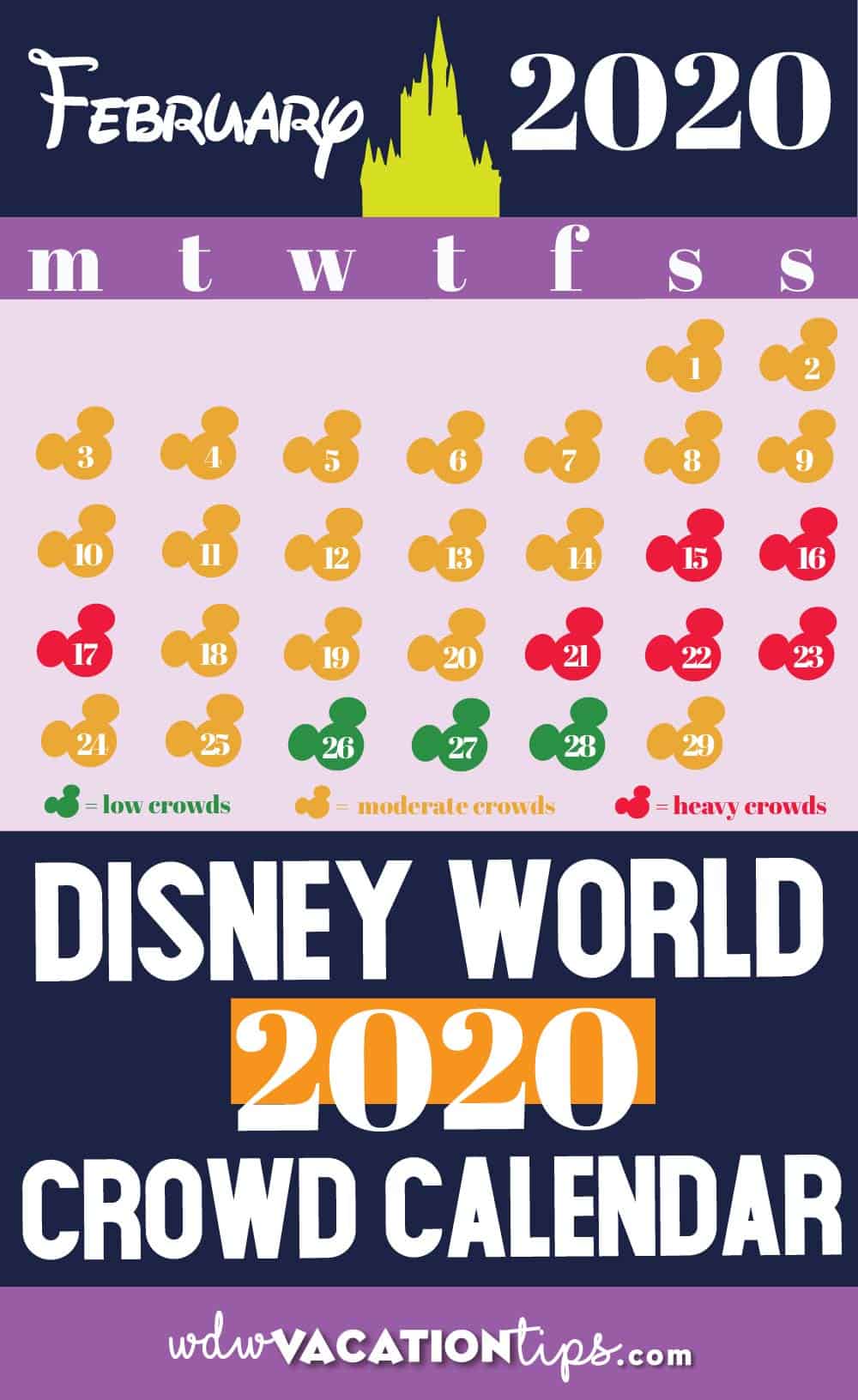 February 1-13 – Light crowds start off the month of February. Note that ESPN Wide World of Sports is hosting various dance and cheer competitions.

February 14-17 – President’s Day Weekend is one of the busiest holiday weekends. This is mainly due to many school winter breaks falling during this time.

February 19-23 – Crowds decrease from Presidents day but then gear up for the weekends Princess Half Marathon.

February 24-29 – Mostly light crowds to finish up the month of February. Note that Mardi Gras falls on the 25th this year.

Disney World in March takes on a spring break vibe. Spring break = mega crowds! Since you are thinking of traveling during this busier time of year, you are going to want to make sure you are diligent in putting together your plan.

March 1-15 – Slightly heavier crowds than normal to start off the month due to Mardi Gras crowds still lingering. Plus several big cheer events are happening at ESPN Wide World of Sports.

March 4 – First Day of Epcot’s Internation Flower and Garden Festival, prepare for a very busy day at that park

March 16-31 – Spring break crowds will show up during the last part of March as schools and colleges start to go on vacation.

Spring break for school across the country continues during the April timeframe. With a heavy amount of people in the parks for Easter week as this is when Spring break falls for many.

Visiting during this month it’s important to keep a close watch on the weather forecast leading up to your trip. The weather on average ranges from the overnight lows of around 55 to the daytime highs around 83.

April 16-19 – Moderate crowd increase due to the Disney Star Wars Half Marathon. There are also some straggling spring breakers from schools up in the North East.

May 2020 Crowds at Disney World

Disney World in May kicks off the start of summer. I would avoid the last week of this month as the crowds pour in for the holiday weekend and start of summer. The weather on average ranges from the overnight lows of around 65 to the daytime high of 88. It’s a good idea to pack as you would for summer during this month. The temperatures are warm and humid in May and it can get quite toasty.

May 23-24 – School starts to get released for the summer and moderate crowds will appear.

For more information read Visiting Disney in May

Disney World in June means everyone is out for summer break. Typically this means insane crowds at Disney World, but we have noticed a decrease of people during the summer over the last two years. Now don’t take this the wrong way. It’s still busy, it’s just not packed. June is a rare opportunity to experience Epcot without a festival overlay. Don’t be surprised by cloudy skies and occasional showers despite the heat.

There are no major holidays or events to watch out for this month. However, due to just about every kid being out on school break to expect fairly busy crowds in June.

Visiting Disney World in July is also visiting at the heart of the summer here in central Florida. As such it is the hottest, priciest, and busiest month to come visit Disney World. We recommend if you have the flexibility to look at an alternate time to visit. For a lot of people, however, this is the only option for making a trip out to see Mickey.

July 1-5 – Very heavy crowds for the fourth of July holiday. Many people get extra days off of work and enjoy coming to see the special fireworks shown.

July 6-31 – Expect fairly busy crowds throughout the rest of the month, though summer crowds have been improving compared to prior years.

August is a sign the summer is coming to an end and with that means a slight amount of relief from the heat. With schools in the south heading back in session at the beginning of the month you start to see crowd relief by the end of the month. This is the perfect opportunity for those of you who have kids that start school in September to take a trip.

We are waiting for the announcement of the start of Mickey’s Not So Scary Halloween Party and Food and Wine Festival these will determine if when we should expect heavy traffic weekends. Historical both of these events will begin mid to late August.

Your dates are wrong. February 21st is a Friday in 2020. Not sure about your other months just was looking at February

Hello! Thanks for reaching out, looking at the chart I made 2/21 is listed as Friday. Are you referencing something other than the calendar graphic?