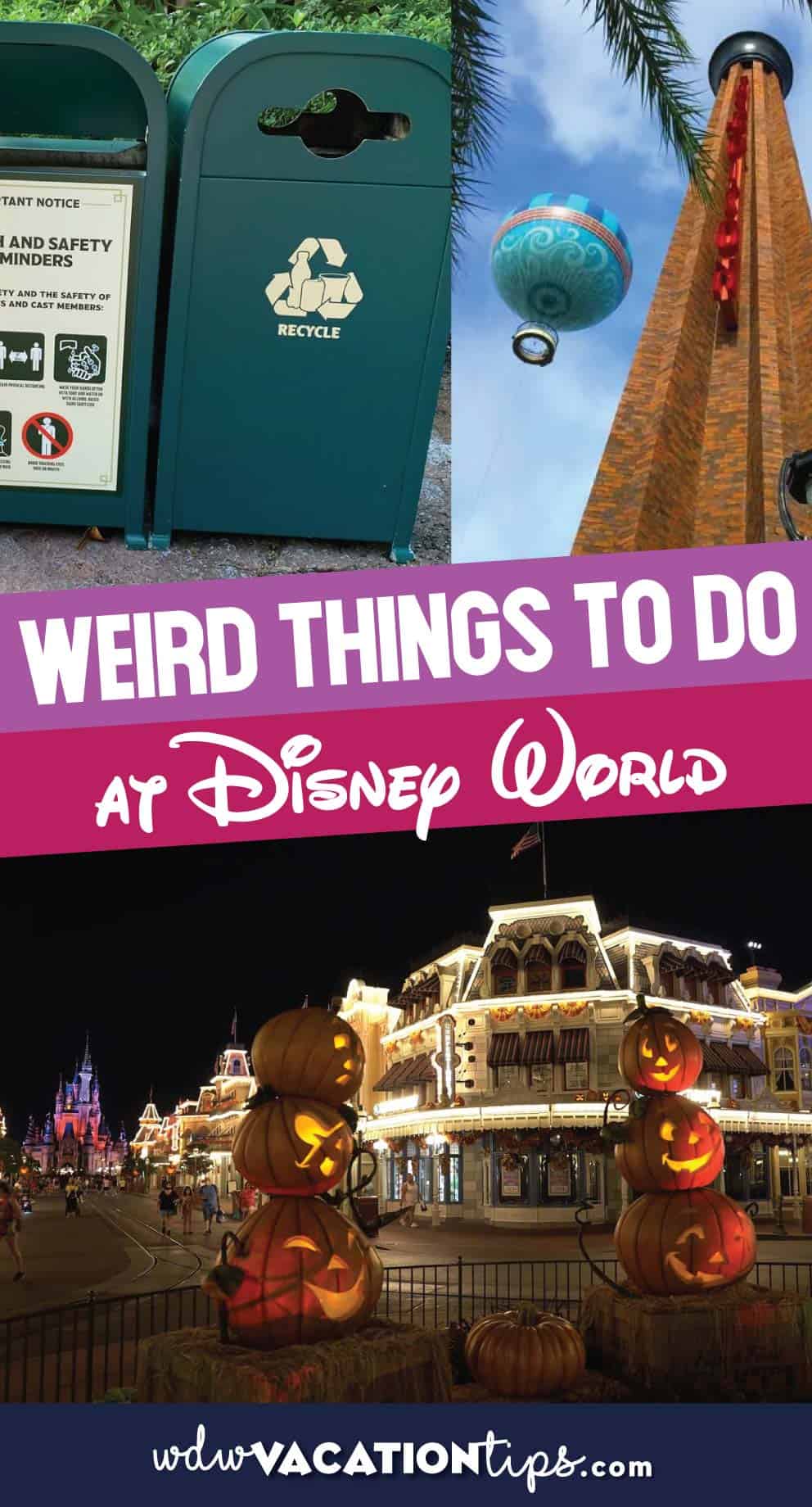 Let’s be honest – Disney World is kind of a weird place. There, it’s socially acceptable to walk around with a lightsaber, eat a dole whip at 10:00 am, and wear mouse ears on top of your head and literally, no one would bat an eyelash. This is (obviously) what makes it better than, well, the real world.

But besides all the ways in which Disney World may be a little strange, did you know there are even WEIRDER things you can do during your trip? Here are 10 weird things to do at Disney World (that I totally recommend):

Get the Disney magic without ever stepping foot in the park? It may sound strange, but it’s absolutely possible thanks to resort hopping and a day spent at Disney Springs.

Before the pandemic, it was a lot easier to buy a ticket day of, but those days are long gone now that Disney requires each guest to make a park reservation. But if you were visiting Florida for other reasons or simply unable to secure a reservation, you don’t have to miss out on all the Disney magic.

Park at Disney Springs and visit world-famous stores like World of Disney, grab a bite to eat at Planet Hollywood and take a bus back to one of the Disney resorts so you don’t have to pay for parking. You’ll be able to see the Disney buses, explore the property, take pictures, and get a hold of some exclusive resort-specific merchandise.

My husband and I have done this several times and though we miss the rides, an afternoon spent at Disney Springs certainly gives us our fill of Disney magic.

Read more: 8 THINGS TO DO AT DISNEY SPRINGS WITH TODDLERS

While everyone else back home may start celebrating Halloween in October, the festivities in Disney start in August. Disney’s specially-ticketed event, Mickey’s Not-So-Scary Halloween Party takes place select nights starting August 12th, 2022 – October 31st, 2022. During this event, guests can trick-or-treat up and down Main Street, don scary costumes, watch special performances and meet rarer, villainous characters throughout the parks.

Though regular folks have to wait until October to get their fright on, Disney adults know that the spooky season technically starts when Disney World hangs up its autumn decor. Is it weird? Yes. Do we love it? Also yes.

Did you know you can take a hot air balloon at Disney Springs? The Aerophile takes guests up to 400 feet in the air, providing an awesome view of Epcot and elsewhere for up to 10 miles.

Weather permitting, the balloon normally operates Sunday through Friday 9:00am to either 11:00pm or 11:30pm depending on what time the rest of Disney Springs is open until. This is a pretty cheap experience, too, costing $20 for children between the ages of 3-9 and $25 for adults (ages 10 and older). I took a ride on the Aerophile a few years ago and the views were really out of this world.

However, I don’t recommend it if you’re scared of heights because you are up…very, very high. Like, you can see the top of Spaceship Earth high.

Read more: WEIRD DISNEY WORLD ACTIVITIES YOU HAD NO IDEA ABOUT

4. Look at the Abandoned Discovery Island

This is not the most exciting activity ever, but if you’re a huge Disney nerd like me who loves learning about defunct parks and attractions, stop by Disney’s Contemporary Resort to check out the views of the now-Discovery Island.

Since it closed down in April of 1999, Discovery Island has pretty much been left abandoned. Though you won’t be able to see any of the remnants left behind on the island or even visit it, knowing you’re looking at an abandoned theme park in the middle of Bay Lake is pretty weird and cool at the same time.

5. Discover Where They Keep the Trash

Raise your hand if you’ve been personally victimized by the desire to see where they keep the trash at Walt Disney World? Alright, alright, technically touring the famous utilidors is much more than seeing where the trash is kept, but still.

Magic Kingdom was built on top of a series of tunnels that not only deals with the trash mentioned above but is where the rest of the magic happens. Literally, it’s where Cast Members are walking to get to and from their specific land, and so much more. Guests can only access the utilidors by purchasing Disney’s Key to the Kingdom tour. This is a five-hour-long tour that costs $114 a person, and honestly, it’s a steal.

Of course, the more you know about what goes on behind the scenes, the more likely it is that the magic will get a *little* ruined, but if you’re okay with this, then full steam ahead.

I mean, doesn’t everyone get their hair trimmed on their Walt Disney World vacation? Harmony Barber Shop on Main Street, U.S.A. allows both kids and adults to get their hair cut in an old-fashioned, beautifully themed barbershop.

Keep in mind, that these are only going to be your most basic cuts and simple styling so don’t go in here expecting a dye job and extensions. A lot of parents stop in to get their child’s first haircut on their trip because they get to keep a lock of their hair, a certificate, and a commemorative Mickey Ears hat. It’s a really cute thing for parents to do!

7. Rent a Cabin in the Pacific NorthWest

Though Walt Disney World may be a far way from the chilly Pacific Northwest, you can still get the nature-based experience by renting one of the newer Cooper Creek cabins at Disney’s Wilderness Lodge.

This resort is themed to the Pacific Northwest and these cabins are beautifully designed to match the calming mood you’d get on a cold winter’s night, nestled up with your love in a cozy cabin in the middle of the woods. These rustic cabins are huge and feature a living room, dining room, kitchen, master bedroom, screened-in porch, and a hot tub. It’s the ultimate definition of luxury.

Though other Disney resorts offer villas and cabins, this one really makes you feel you’re vacationing somewhere other than Disney World. You’ll be smacked with the reminder when you step outside, of course, but once inside, it doesn’t even feel like you’re in Florida. It’s so weird (which is why it makes our list).

8. Get Drunk on the Monorail Crawl

The Monorail Crawl is not technically a Disney experience, but it’s one you’ll enjoy nonetheless. Since the monorail takes you around to several deluxe Disney resorts, you can visit all the bars and lounges along the way. If you’re starting at the Contemporary, stop in the lounge at Steakhouse 71 or bar at California Grill. Next, head to Disney’s Polynesian resort to visit Trader Sam’s Grog Grotto and Tambu Lounge before wrapping your crawl up at the Enchanted Rose Lounge at Disney’s Grand Floridian.

Remember to always drink responsibly and if you can, try to book a night at one of these resorts or at least designate a sober driver, or call an Uber to get you back home safely.

If you’ve always wanted to learn how to ride a Segway, hop on over to Disney’s Fort Wilderness Resort and Campground. This Segway tour costs $90 per person and takes you all across the resort’s campgrounds, including photo ops at Bay Lake and a visit to the stables.

Don’t worry if you’re nervous about riding; you’ll get a 30-minute practice time before you jet out on your adventure, along with an electronic earpiece and safety helmet.

Last but not least, why not check out an aquarium while you’re visiting Epcot? Once you exit the Seas with Nemo & Friends, you’ll be let out into Water World – a 5.7 million gallon aquarium that features sharks, stingrays, and countless colorful fish. If you’re lucky you may even see a special guest inside the tanks once in a while, too.

Read more: WEIRD DISNEY WORLD ACTIVITIES YOU HAD NO IDEA ABOUT

While there are always a million fun and exciting things to do at Disney World, these 10 semi-strange activities take the cake. Have you done any of these before? What’s the weirdest thing you did at Disney? Let us know in the comments.