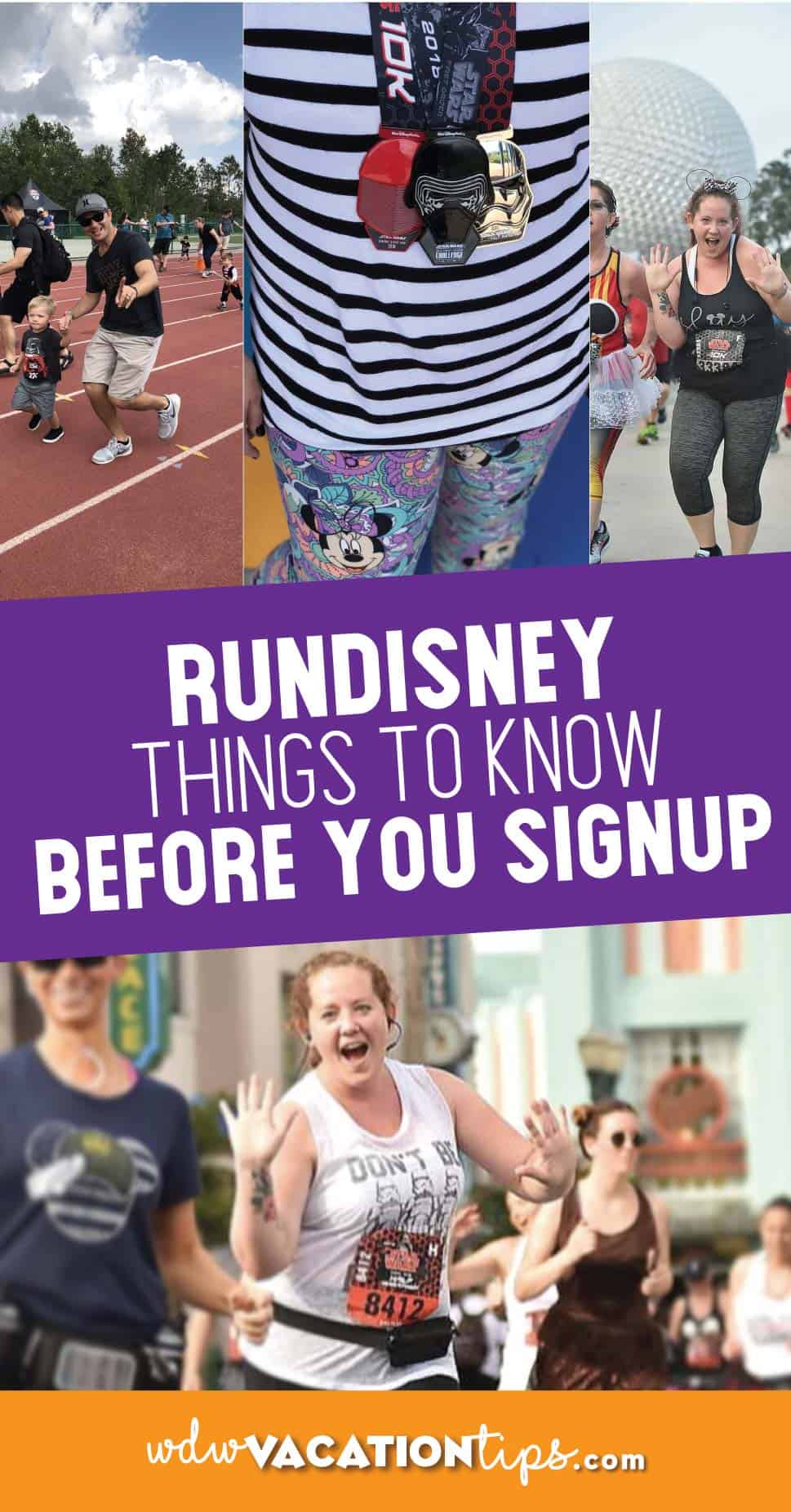 One of most favorite Disney offerings is runDisney. I call it the ultimate Disney perk! It’s one of the best things I’ve ever experienced and it’s something I do as often as possible. I’ve completed four runDisney events including a half marathon and it’s something I am so proud of. There are many assumptions when it comes to Run Disney and I’ll run through all the details so you know the high level of magic it offers. Here are 6 things to know about runDisney events. 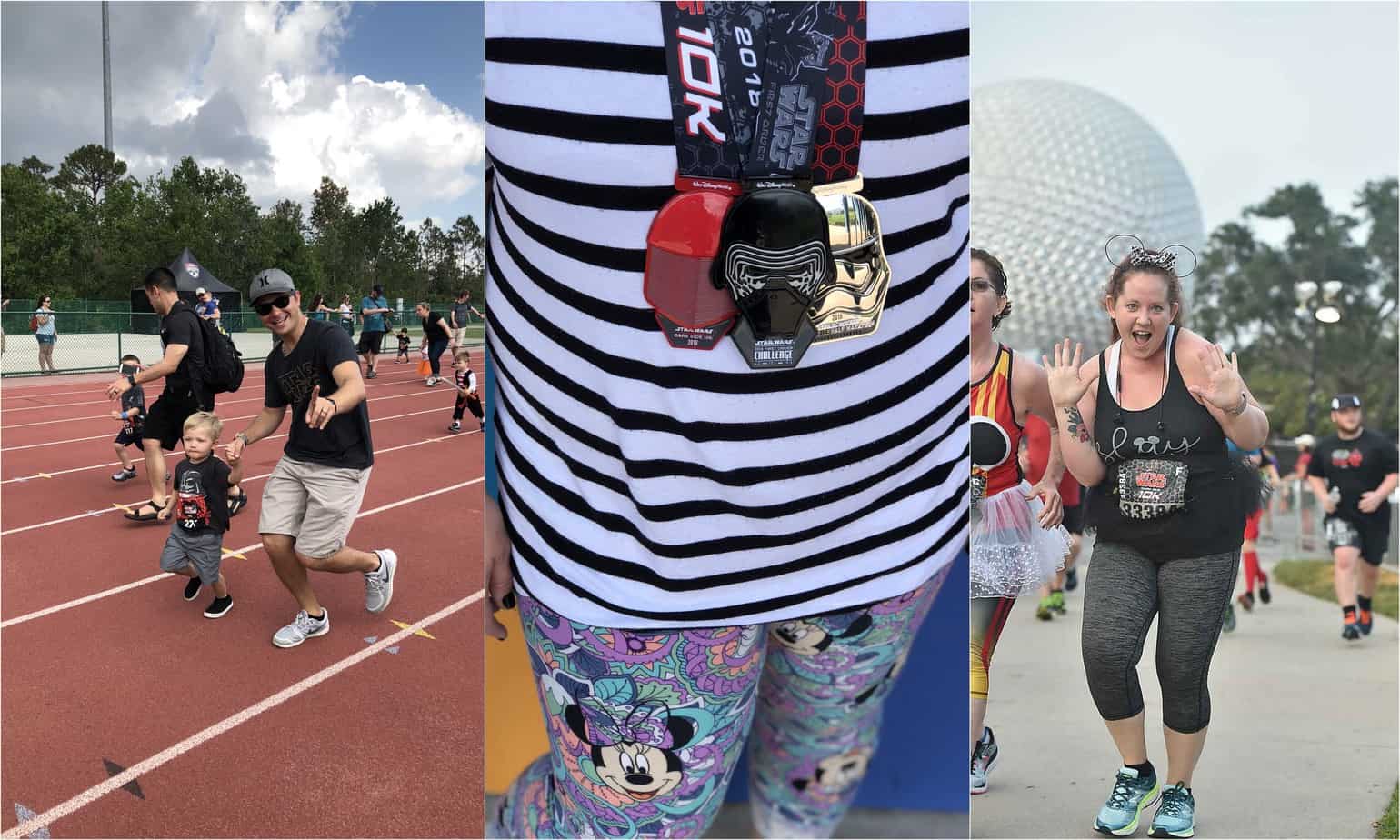 1. The Production and Cheering Might Bring you Tears of Joy

In true Disney fashion, they go all out for RunDisney events. The run theme is throughout every part of the event from registration to music to fireworks to character meet n greets. Disney goes all out to make sure you get a complete experience! Each corral that approaches the start line is given the same treatment which includes a countdown and fireworks to kick off your run. While you’re waiting for the races to begin you’ll hear race-themed music, see hundreds of costumes (dressing up for the race is just one of the fun parts), take part in race-themed trivia, and wait in short lines to meet characters. For example, the Star Wars race is a fun one that includes photo ops and Star Wars trivia fun before you begin your run and then throughout the run. The mile markers are themed with large photos of characters making for great photo ops yet again.

There are volunteers throughout the race cheering you on. These strangers are holding signs, giving you high fives, and clapping for you. Tears have run down my face during these cheering moments, especially during the half marathon. Imagine running a half marathon and struggling through those last few miles to see a sign cheering you on or listening to a choir sing inspirational songs as you jog by. It’s a feeling of support like none other and support from total strangers. 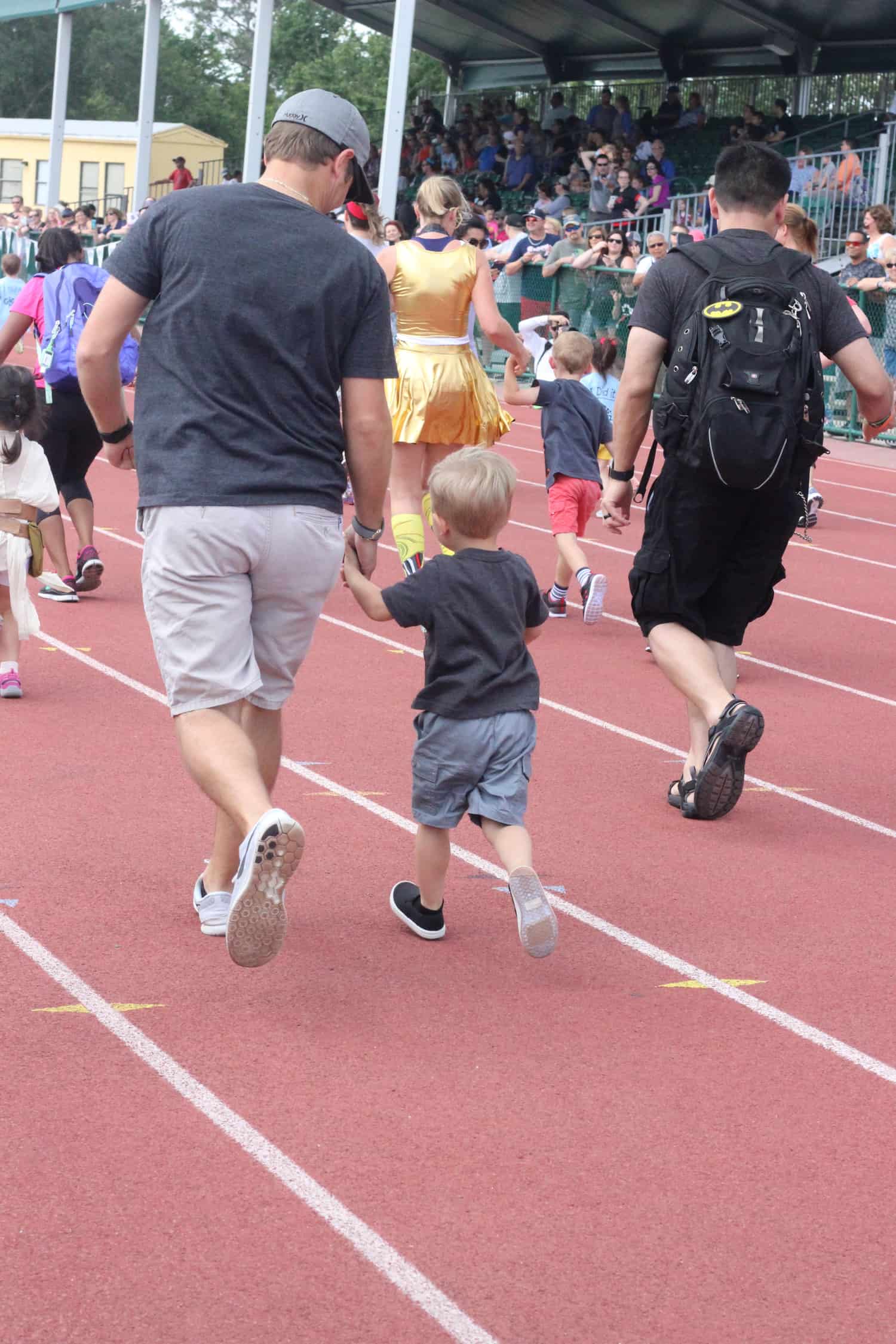 Run Disney offers a variety of races for all ages, 5k, 10k, half, and full marathons. They do a great job staggering the races where everyone gets to do 1 at a time and be there to support each other. For our last Star Wars Race I did the 10k then we took our oldest to do his kids fun run and then the next day we did the half marathon.

The kid’s races allow a parent or family member to run with them as they do their dash (typically 100-300 meters) which makes it even more fun! My 4-year-old loved his Star Wars race medal and it’s hung up proudly in his bedroom. I love that the entire family can be involved in the fun.

If you’re not interested in running but want to be there to support you can sign up as a volunteer or simply join the racer early that morning to cheer them on. You can create your sign and be at the finish line too! Volunteers have the ability to cheer from inside the park and at the back lots too. Making the race weekend event a full family event is the way we enjoy runDisney.

The runDisney expo is one of my favorite events. The expo runs throughout the race weekend and it’s held at the ESPN Wide World Of Sports on Disney property. This is where you pick up your registration packet and race bib, but most importantly this is where you get runDisney gear, exclusives, and one of a kind drinks!

During the Food and Wine race, I stopped in the expo multiple times just to soak up all the race Disney items, expo vendors and sip on raspberry beer (a limited edition race beer you could only get at the expo). You’ll find limited edition running gear such as themed outfits at the expo as well as limited edition made items. During the Star Wars race, I purchased a Kylo Ren Dooney and Burke purse you can’t buy anywhere else, how fun is that?!

You can also chat with vendors, try samples, get your knees taped before race day too! If you’ve not taken part in a runDisney event I suggest making time for the expo to check it out; all Disney guests are welcome.

The medals are stunning and have some weight to them! What I’m getting at is you get high quality themed character inspired medals to show off with pride. The children’s races offer rubber-like medals for safety and durability. There are even race medal hangers available at the runDisney expo!

If you’re planning a theme park visit during the race weekend and you’ve already earned your medal I highly suggest wearing it throughout the parks. I’ve been given snacks and drinks as a gift from cast members while wearing my medal. Be sure you to get a free Disney button to list your race victory too! If you join in on multiple races during the race weekend event you get a “bonus” medal too. For example, during the Star Wars races, I did the challenge which was a 10k and a half marathon. Once I completed both races I was given a 3rd medal, the challenge medal to wear proudly!

During the Run Disney race weekend, hotel discounts are available. We typically stay at an All-Star Resort as the price is reasonable. However, I suggest booking your hotel months and months in advance. We waited 2 months before race weekend once and paid double what we typically pay for the value resorts. All Disney resorts offer shuttles to and from the race drop off location and expo.

Once you’ve arrived at your hotel you don’t need to get in your car again until it’s time to head home. I hop on and off the shuttles multiple times to enjoy the expo, for the kid’s races, and then bright and early for race day fun! I highly recommend staying on property to take advantage of the shuttles as roads are blocked and closed down for race weekend making traffic a bit tough. 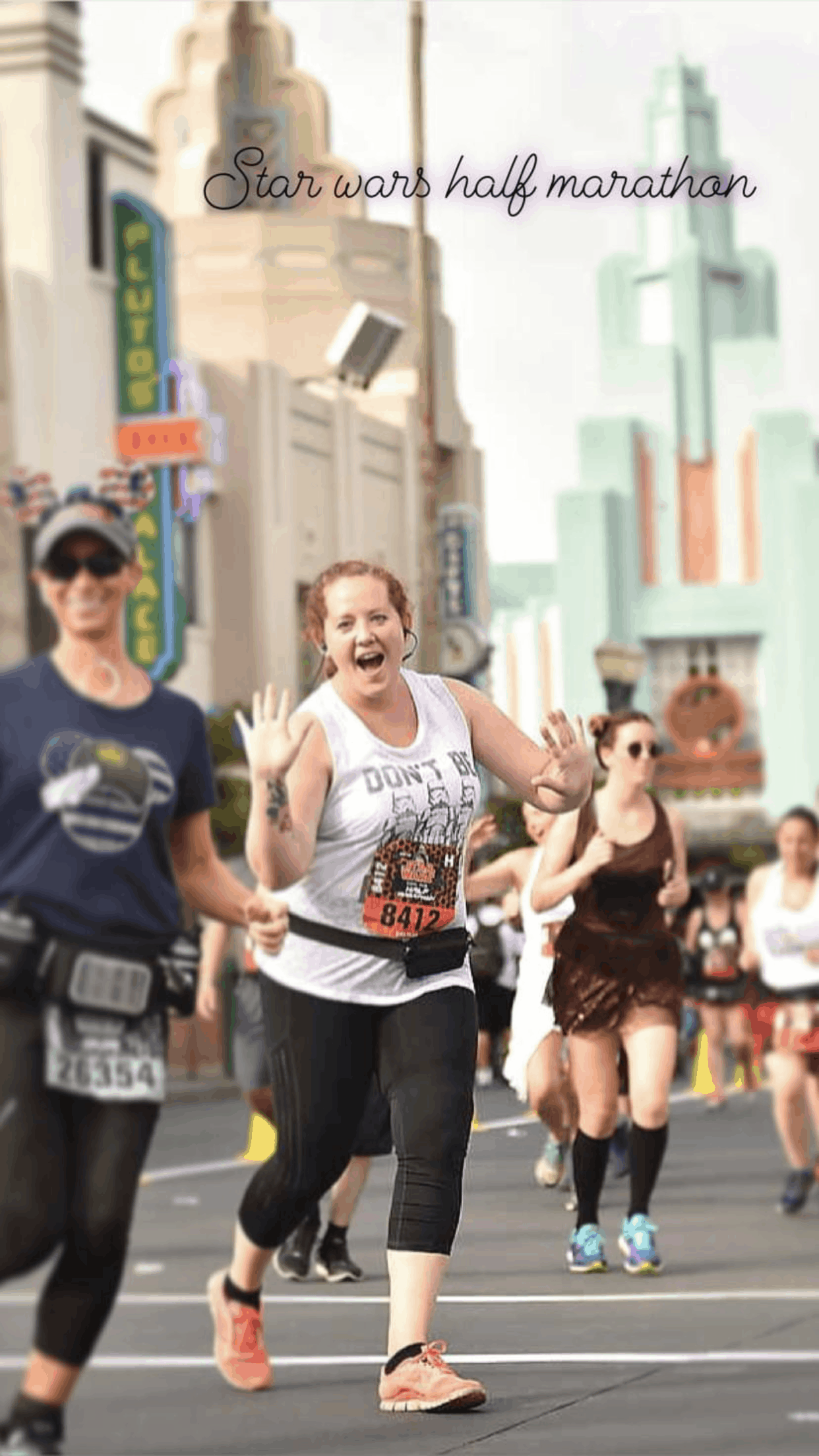 Disclosure: you can only run through the Magic Kingdom during the princess marathon weekend. During the Star Wars run and Food and Wine running events I ran through Epcot, Animal Kingdom and a section of Hollywood Studios. There are photographers situated throughout the parks snapping epic photos of you as you run through the theme parks.

Talking about RunDisney excites me! It’s such a magical running experience that I believe everyone should be a part of. The cost is a bit high but what you’re getting for the cost is worth it over and over. I promise you’ll leave on a high! My next Disney race is the Star Wars race in April, which I’ll be doing again with my oldest toddler. Races do fill up quickly so I highly recommend signing up the day the tickets are released to secure your spot. What Disney race will you be signing up for?

I have a cousin who is planning to join a running vacation race for a charity cause next month. I'm glad to know that the marathon race is for all ages and it has different kilometers for each category. I think I also need to ask my children if they want to participate in the event since all the proceeds of the event will be donated to the charity that they are supporting.