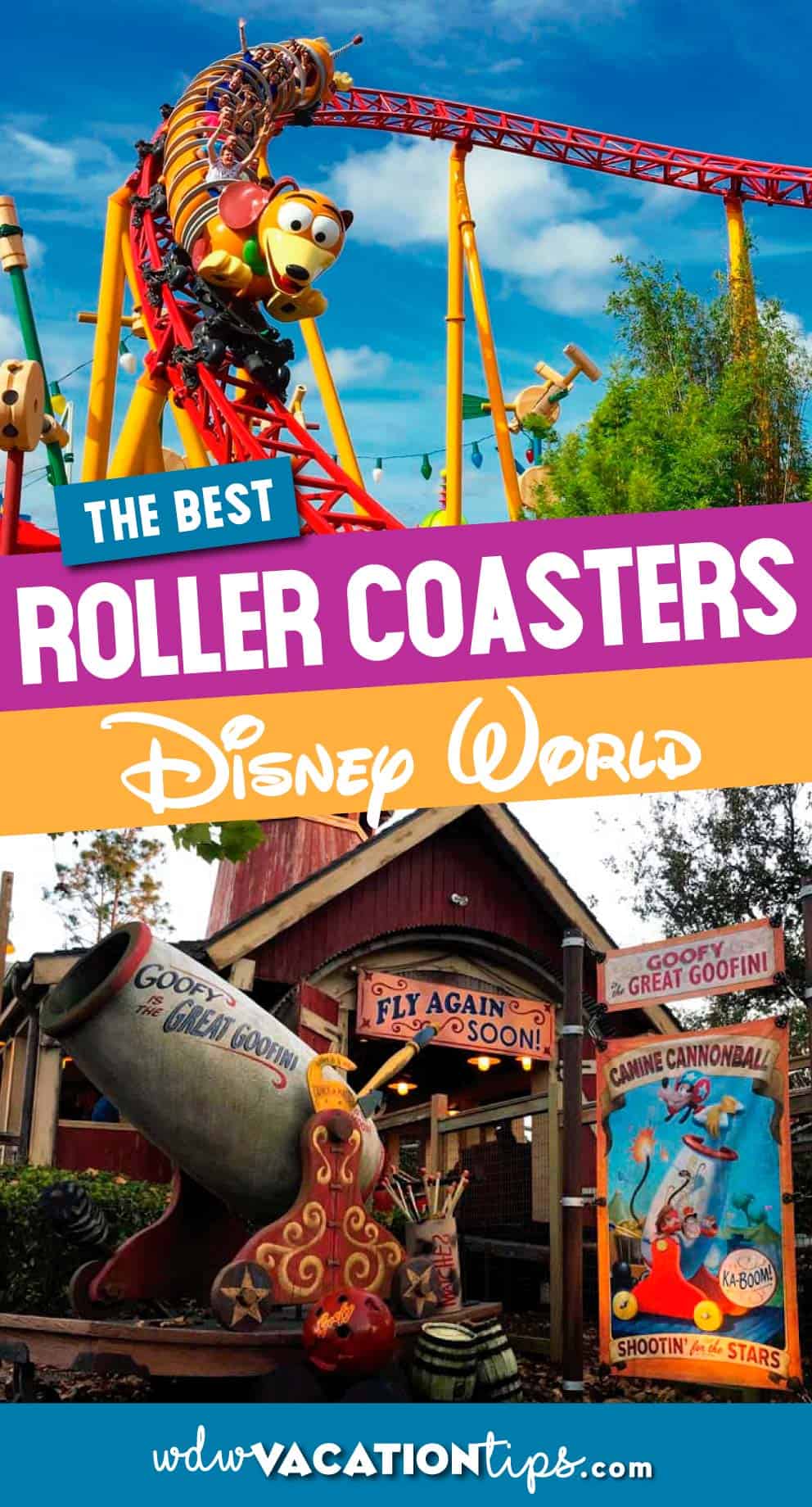 This roller coaster is perfectly fine, except for the fact that it’s specifically designed for small children and because of this, doesn’t target as wide an audience as the other ones on this list. The Barnstormer is a child-based coaster in Storybook Circus in Fantasyland that features small drops in a “handmade” stunt airplane. Guests have to be 35” to ride, and while anyone of any age can ride it, it’s one that older kids and couples will certainly skip.

I said there was going to be a controversial pick on this list — I’m sorry! While the theming of Space Mountain is great, it’s not as well-themed as the other roller coasters in Disney and could definitely use an update. Space Mountain always has an incredibly long wait and it’s always SO awkward getting in and out of the ride vehicles. While I’m probably not the only one who ducks their head while riding it, what makes Space Mountain lose points is how rough the ride through space is. This ride tends to hurt a lot of people or cause them motion sickness, (especially the older they get) and because of this, it gets ranked as the second worst roller coaster in Disney World.

Maybe this is another controversial one, but Slinky Dog Dash over at Disney’s Hollywood Studios is good — but not great. The theming of the queue line is incredible — probably one of the best out of all the parks — but the ride experience is simple. It does give you great views of the Tower of Terror and Galaxy’s Edge, but outside of the two launches, the ride isn’t really that all exciting.

It’s actually because of how tame this ride is that many parents consider Slinky Dog Dash to be a good starter roller coaster for kids to try out after they’ve graduated from the likes of the Barnstormer in Magic Kingdom.

Swinging back over to Magic Kingdom, you’ll find Seven Dwarfs Mine Train. This Snow White-inspired coaster is incredibly well-themed and the scene in the mines is one of the best on property (and one of my all-time favorites). The ride vehicles actually sway back and forth, creating a much more exhilarating experience.

That being said, though, it’s incredibly quick at only three minutes. While this ride is just as long as Space Mountain and Big Thunder Mountain, you’d be hard-pressed to find the wait time for this roller coaster to be anything less than 90 minutes (at minimum). Despite being around for years, this ride consistently has one of the longest wait times at Magic Kingdom. While the lines for Space Mountain do commonly reach an hour, you can find times when the wait is much less than that. That’s hardly the case for Seven Dwarfs Mine Train, which is why it comes in at #4 on our list of Walt Disney World roller coasters.

Staying at Magic Kingdom, guests can ride the wildest ride in the wilderness over at Big Thunder Mountain Railroad in Frontierland. Guests will rip through a haunted gold mine, pass under T-rex bones and bats on this thrilling adventure. It has a good speed, unique theming and the wait times aren’t usually that bad — hardly creeping over 30 to 40 minutes on most days.

What makes Big Thunder Mountain Railroad so special, though, is the story that it tells its guests. After spirits caused floods and earthquakes, the mining town was abandoned only for explorers to find the abandoned trains (all of which have different names) driving themselves with no one in them. The queue lines are incredibly immersive, allowing guests to learn more about who worked there and what they did. Big Thunder Mountain is one of the best examples of unique storytelling that Disney World is famous for, without a well-known fairytale being attached to them.

1, 2….and you’re off. And, if you didn’t read that countdown in Steven Tyler’s iconic voice, you’re lying. Rock ‘n’ Roller Coaster is a unique thrill ride that takes guests through G-Force Records, before being invited to attend Aerosmith’s concert. To get there, you’ll board a stretch (sorry, super stretch) limo and rip through famous Hollywood landmarks. The ride’s incredibly short — 1 minute and 22 seconds — but gives riders a thrill they won’t be able to find anywhere else on property. The ride takes place completely in the dark and goes upside down multiple times, all the while having Aerosmith blasting in your ears.

With Rock ‘n’ Roller Coaster being re-themed to Iron Man in Disneyland Paris, I think it’ll only be a matter of time before this ride gets updated when Walt Disney World gets the Marvel rights away from Universal. While that ride will no doubt be great, this was a lot of people’s first exposure to a thrilling roller coaster in Disney World that has surely created lifelong fans.

Read more: The Best Rides at Disney World for Adults

What do you get when you combine a roller coaster that’s partly in the dark, goes backwards, has a steep drop and terrifying theming? Expedition Everest in Animal Kingdom! Out of all the Disney World roller coasters, Expedition Everest is by far one of the most thrilling. Guests will travel through the Himalayan mountains and come face-to-face with the infamous Yeti.

This ride clocks in at 50mph, which is about 7 miles slower than Rock n’ Roller Coaster, but is still one of the fastest roller coasters on property. What sets Expedition Everest apart from every other roller coaster on this list is that it goes backwards before immediately falling into the dark. For first-time riders, this is so unexpected and even now, despite having ridden it dozens of times, I still get excited when it happens. It also has a sharp drop that is really unexpected, which is why it makes our list of the best roller coaster in all of Disney World.

So there you have it: all of the Disney World roller coasters ranked. Do you agree with our list? Let us know in the comments.