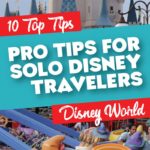 Have you ever thought about going to Walt Disney World alone? What?!? I know you’re probably thinking this has got to be the craziest idea but trust me, there’s a way to do Disney solo without the awkwardness you may be thinking about. There are so many tips online about doing Disney as a family, as a couple, and even with friends. There’s hardly anything out there for those of us brave enough to do Walt Disney World alone. Many of my virtual tales are written based on my solo excursions. I personally travel alone because it is hard to find people who love going to Disney as much as I do. So, I thought it would be great to give you 10 jam-packed Tips for Solo Disney Travelers to jump-start your solo Disney adventure!

A great way to ease into solo travel is to first start small. For example, try getting to the park ahead of your family. So, if you guys plan to meet up at Epcot around 11 a.m., then get to the park at 9 a.m. just to see how it feels to be alone.

You can knock out a few rides in Future World and have breakfast at Sunshine Seasons all before you meet back up with your crew. You may come to realize how much you truly like discovering Disney on your own.

This tip is essential in reducing the anxiety of going to Walt Disney World alone. If you have a specific goal for that day, then you’re more likely not to dwell on the fact that you’re traveling alone. Try making it a day of doing every top attraction at the Animal Kingdom or even a day of tasting every popular snack at the Magic Kingdom.

You can also think about which Disney park sparks your interest the most. Whether you’re trying to do a day full of theatrical attractions or a day of character meet and greets, you can find it all within the Walt Disney World Resort. And don’t forget to read The Solo Theme Park Traveler’s Guide plus ThemeParkHipster.com!

3 – Book Your FastPasses and Other RSVPs Early 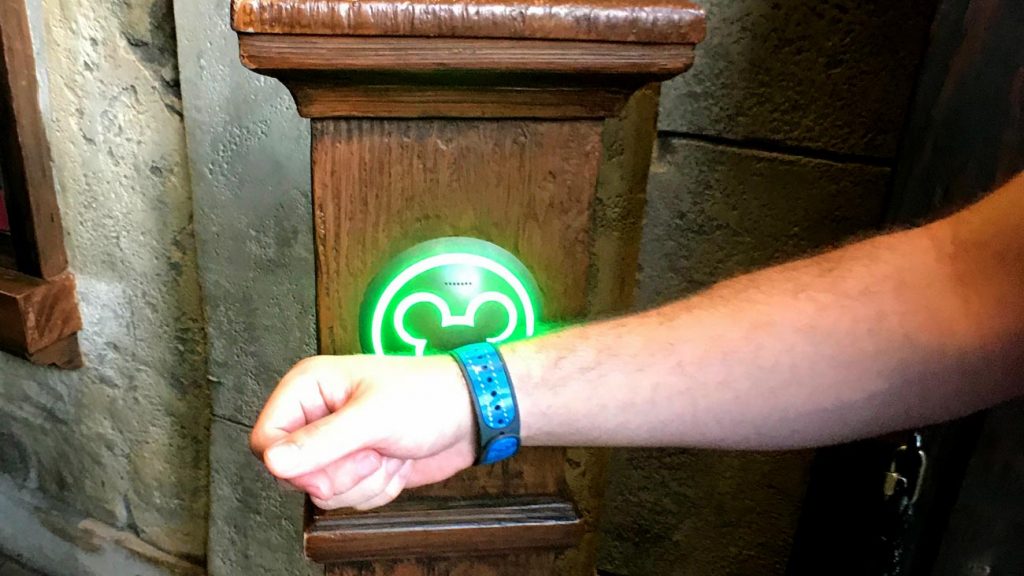 FastPasses are a great way to maximize your time at Walt Disney World.

FastPasses to popular rides such as the Slinky Dog Dash roller coaster in Hollywood Studios or Avatar Flight of Passage at the Animal Kingdom need to be booked ASAP. This will allow your Disney solo day to go much smoother because you will have some type of itinerary.

In addition to booking your FastPasses, you’ll want to make other reservations early too. If you have a must do Disney bucket list item, then this is your chance to do it!

Book the Keys to the Kingdom tour at the Magic Kingdom theme park now. This is your time to shine and live it up on your solo trip. If the Disney VIP tour is too pricey, then consider making a reservation at one of your favorite Disney restaurants such as, Artist Point in Fort Wilderness Lodge.

Since Disney is one of the top tourist destinations in the world, they offer way more than your typical theme park. Dinner shows, VIP tours, and special events are just a few experiences alongside the parks that make a Disney vacation spectacular. It is important to book your dining or special event reservation as soon as you know it’s something you want to do. The super popular events usually book up quickly.

Bonus Tip: Disney is really good about solo diners at Character Meals too. They will help assist you with photos and make you feel special. 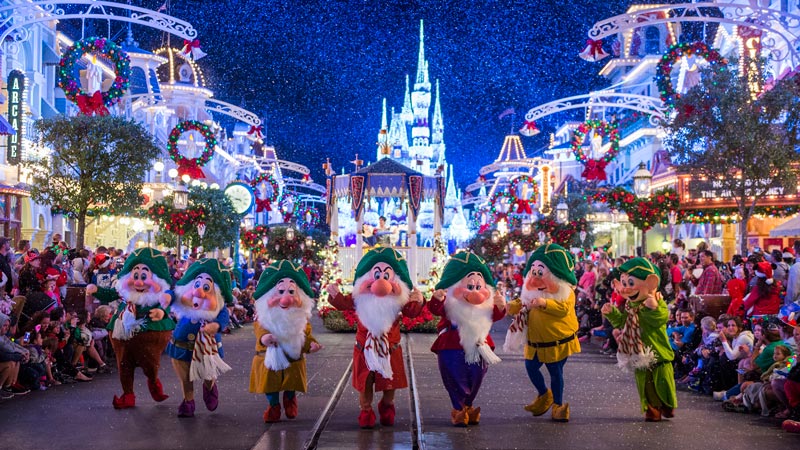 Mickey’s Very Merry Christmas Party is a great event to put on your Disney itinerary!

On your solo Disney journey, it is a time to do Disney your way. It is also one of the main perks of going at it alone. To avoid getting lost in all Walt Disney World has to offer, I suggest searching the web and writing down a list of your own Disney must do items.

5. Pick the Perfect Hotel or Resort

I highly recommend choosing a lively hotel. Staying at a hip hotel with an active bar area, such as the Swan and Dolphin Hotel, makes it easy to meet new people. You can even do this when you’re on a trip with family as a way to get used to doing things alone. This can be done by stepping away for an hour to hang out at the bar or inside the hotel lobby.

While you’re hanging out in the common area of the hotel, I suggest keeping an open posture and avoid using the mobile phone too much that way you’re more approachable to others around you. It’s a great step in learning how to travel alone.

6. Don’t be Afraid to Socialize

Try not to be shy. I know it can be intimidating to introduce yourself to people. It’s so easy to just stay to yourself.

I know firsthand what it’s like to be an introvert, but get out of your comfort zone and introduce yourself to at least one person on your solo Disney trip. You never know what lasting friendship or memory you will make in the process.

Groups found on MeetUp.com is another great way to find other Disney enthusiasts. There are multiple groups within the site for adults who love going to the parks alone. I have personally used MeetUp throughout the years and have met some of my best friends on there.

While on your magical Disney vacation, be sure to inform cast members that you’re traveling solo for possible perks. I’ve learned that Cast Members are usually intrigued by this form of travel and really like to “plus” your Walt Disney World experience. 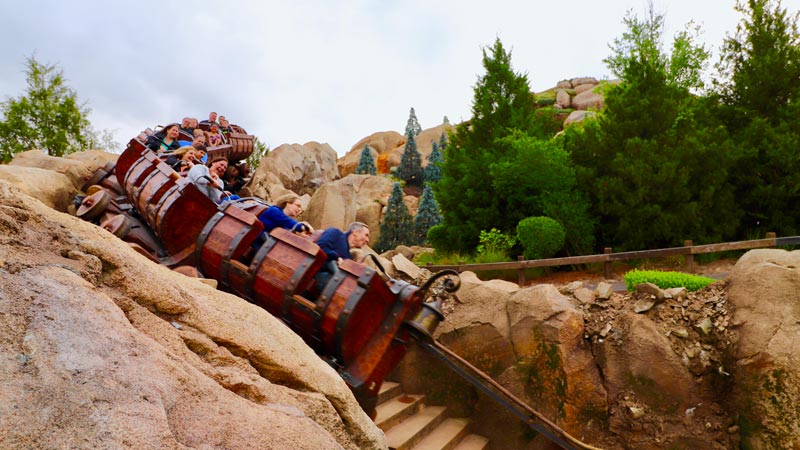 Step your selfie game up and create new memories. You can also take advantage of the PhotoPass system at Disney, where Cast Members will take photos for you that can later be retrieved digitally.

With all the newly created Walt Disney World photo memories, you’ll always remember why your solo trip to such a magical place was worth the effort. Make it your goal to go all in and experience Mickey and his friends like never done before!

You can choose any form of entertainment without anyone mocking you. If you want to ride “it’s a small world” all day, you can! No one’s there to complain. A big plus is that your day will move a lot faster, meaning that you’ll do more without the feeling of being overwhelmed.

With the solo experience, you gain the advantage of becoming a better problem solver, because it’s just you on your Disney trip. You will have to come up with plan A, plan B, and plan C for whatever happens.

Since I started going to Disney on my own, I’ve noticed that I’ve become more confident in introducing myself to other enthusiasts of the parks. Solo travel to Walt Disney World puts me in my happy zone.

You may notice when you’re with your friends you’re more involved in the conversation. However, when you’re alone you’re softly nudged to spark up a conversation with someone waiting in an attraction line with you.

Out of all the tips mentioned this is the most important one. When you arrive at Walt Disney World you are home.  The cast members and Disney guests are all your family, so enjoy every moment of this magical family reunion!

Overall on Disney Solo Trips, take the leap and go!

Don’t wait for anyone. If you want to go to Disney, then go! Waiting for others to join you on such an epic trip may have you waiting FOREVER. It is for this reason that I started going to Disney alone. Plus it is why I recommend that you do the same too!

Let me know below if you’ve ever gone to Walt Disney World by yourself? And if you have be sure to share your tips for solo Disney travelers in the comment section below!

NikkyJ, author of The Solo Theme Park Traveler’s Guide and owner of ThemeParkHipster.com, loves ALL things amusement park related. She was born and raised in Florida, which attributes to her theme park passion. Ever since she was a child she had a natural affinity to the parks that has now spilled over into adulthood.

Instead of rushing over to the thrill rides, like she used to, you may find her in the Italy Pavilion at EPCOT enjoying a nice glass of wine and a delightful book!

Traveling alone to the parks has changed her life and she wants to show how you can create your own solo theme park memories. Learn More!