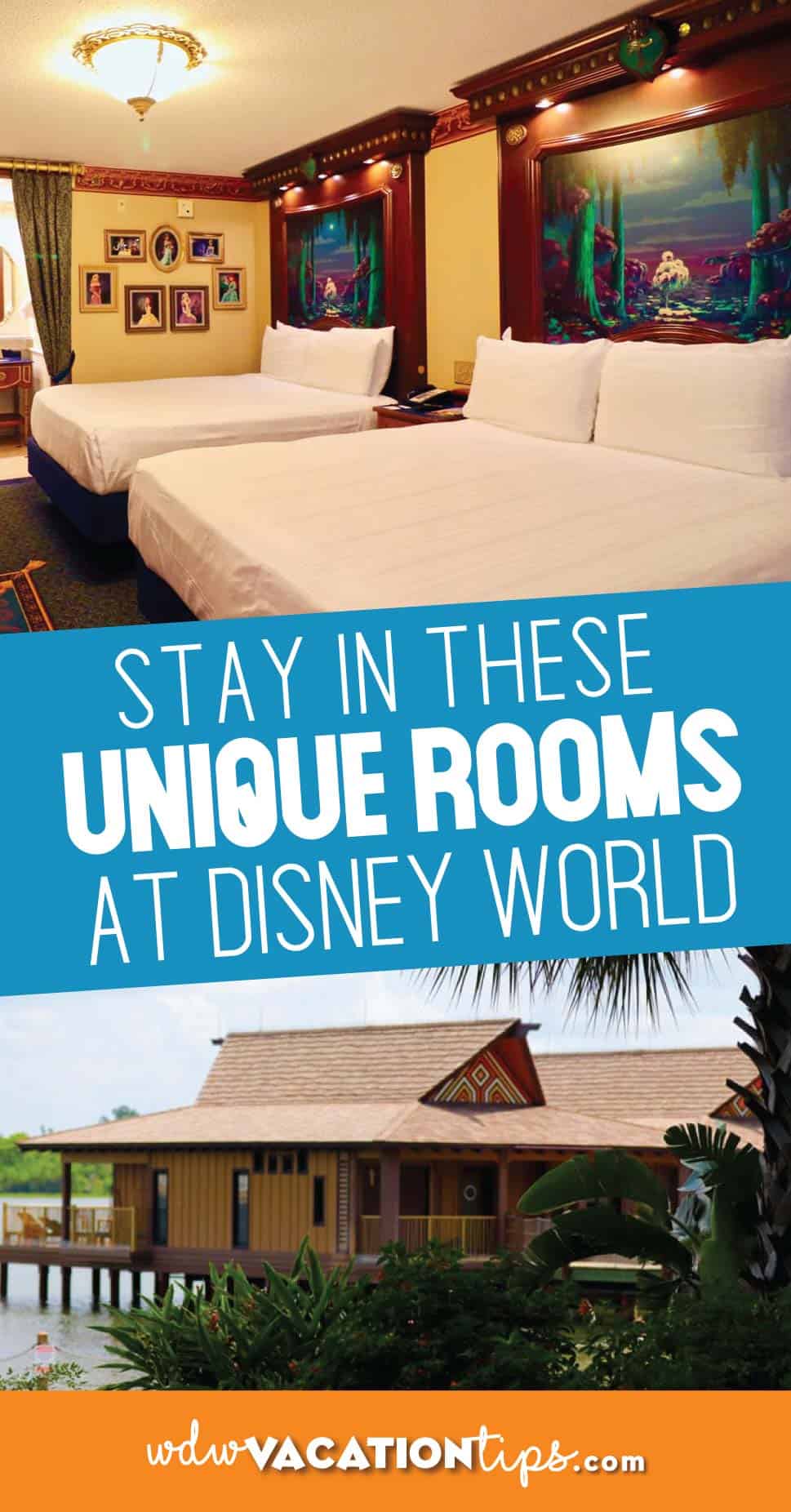 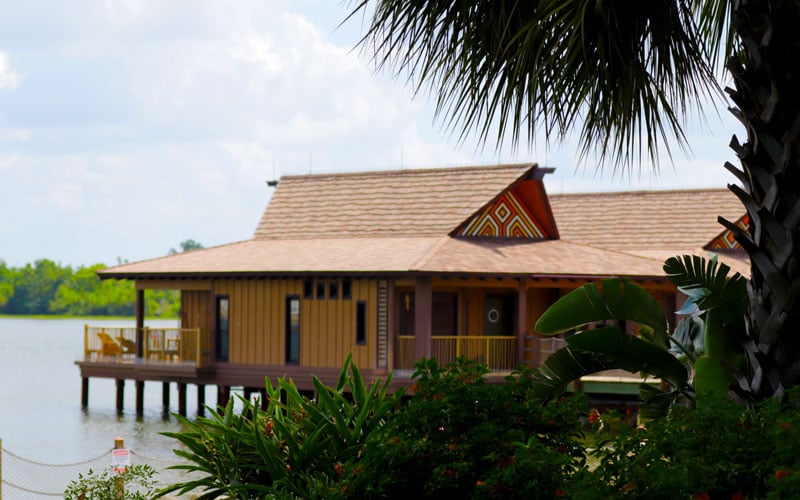 The two-bedroom bungalows include one master bedroom with private deck access and a private bathroom. The other bedroom and bathroom are accessible from the hall. Also, an open floor plan connects the kitchen and living area with sliding doors to a deck and a jacuzzi. Booking a bungalow costs well over $2600 per night and units are limited, so it is not easy to do. 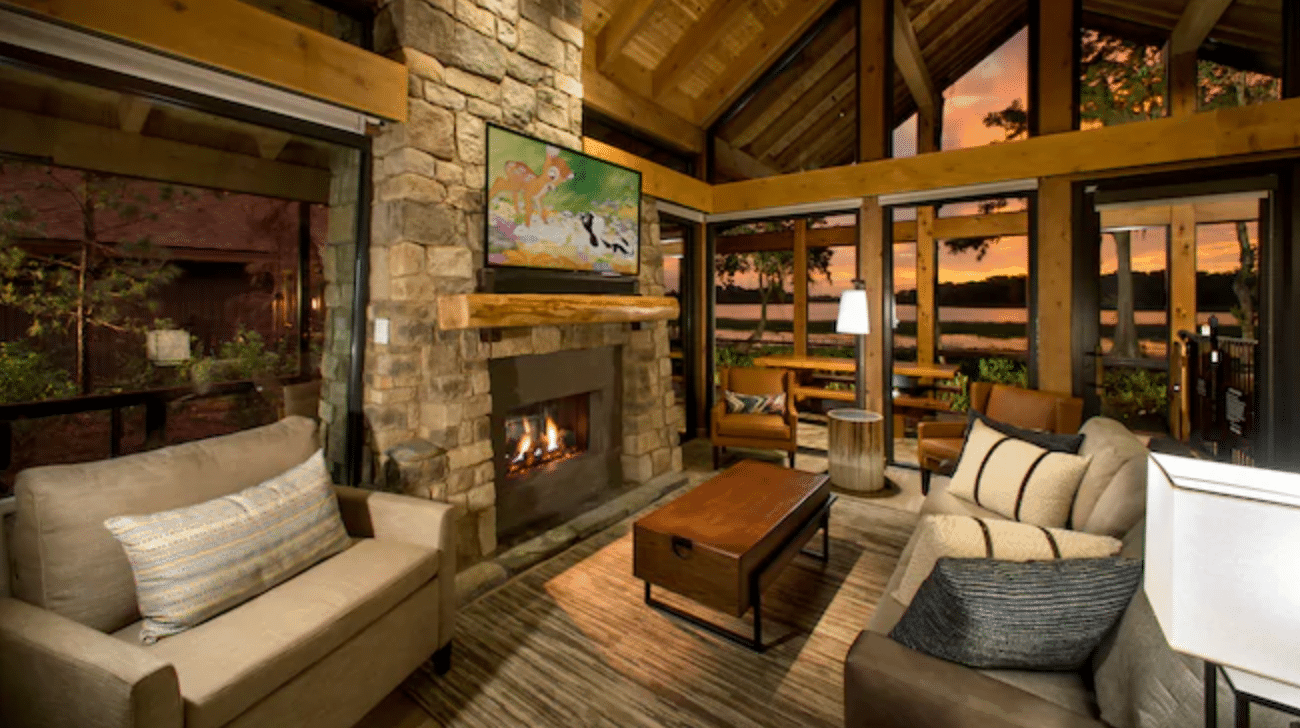 A glamorous way to camp in the rustic wilderness of Bay Lake is the lakeside cabins. They bring luxury and prestige to the rugged and natural allure of Wilderness Lodge. The Copper Creek Cabins are stylish and secluded, with decks that overlook the water. The sophisticated furnishings, floor to ceiling windows are just a start. A screened-in wrap-around porch with a built-in hot tub makes the cabins, an attractive option.

The cabins have the capacity to sleep 8-people. Although similar in concept to the over-water bungalows at the Polynesian Village the Copper Creek Cabins are totally unique. They have original floor plans and architecture. Plus the surrounding wilderness adds a level of privacy and separation from the rest of Disney World without sacrificing the convenient location. 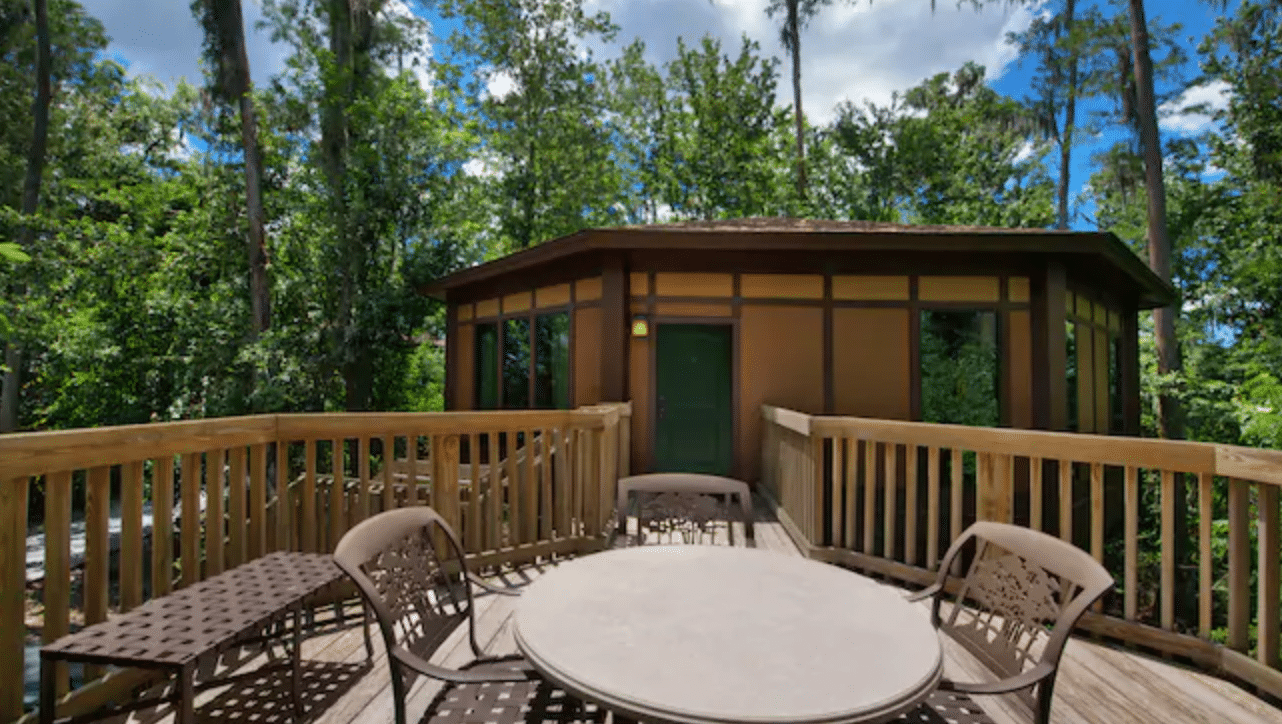 Another unique type of room at Walt Disney World is the Saratoga Springs Treehouse Villa. These take the cabin and bungalow concept to a whole other level…tree level. The Treehouse Villas are octagonal tree houses with amazing forest views. They sleep a whopping 9 guests and have a floor plan unlike anywhere else in Walt Disney World. The three-bedroom villa includes bunk beds and two pull-outs. There is also a full kitchen and a patio deck on the same level.

For a unique style of room that adds some Disney Magic for children, the Royal Guest Room at Port Orleans can’t be beaten. These special rooms were made over by Princess Tiana for her princess friends to have when they visit. The rooms are very plush and elegant with ornate accents on the furniture and decor.

The room is bright as well, with regal colors and artistic nods to the many Disney Princesses. Some accents include a Magic Carpet design on the floor and a Genie lamp faucet. The headboards reveal beautiful scenes from the film the Princess and the Frog, which is set in New Orleans. With royal curtains and framed princess portraits, this fantasy Princess Guest Room is the beginning of a most magical stay at Walt Disney World. 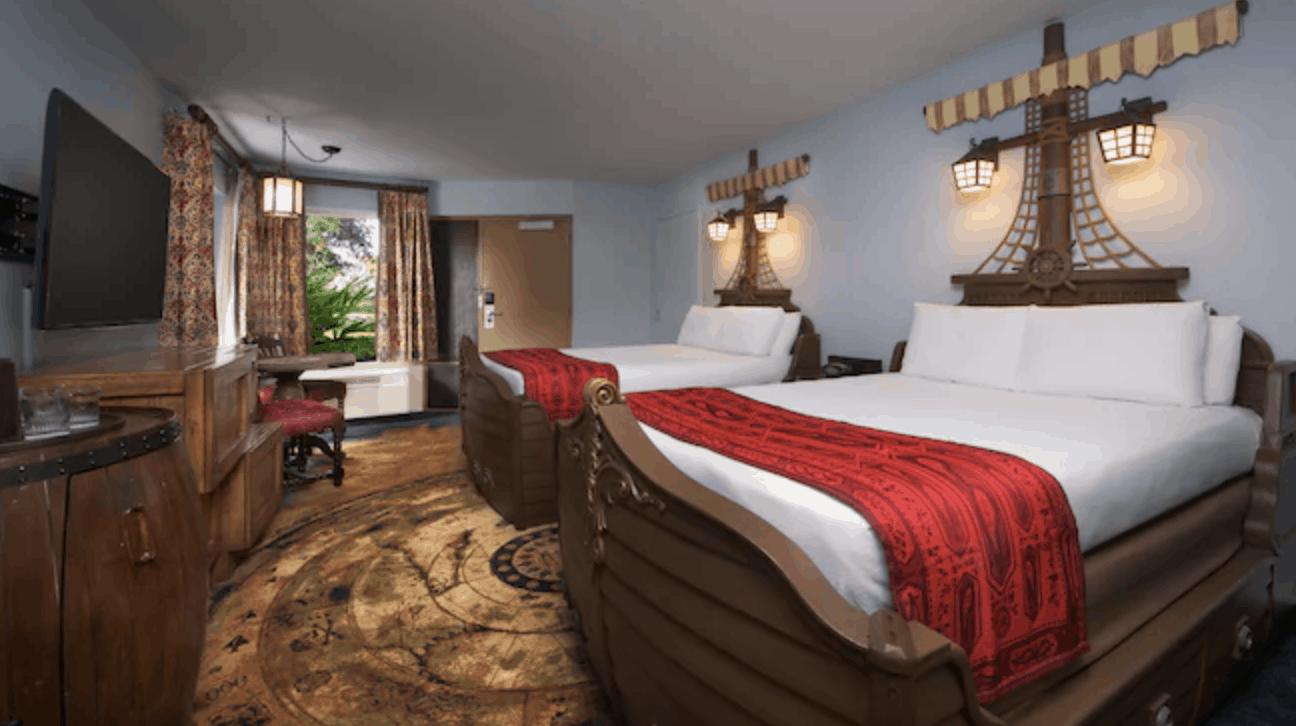 Caribbean Beach, a moderate resort like Port Orleans has a similar themed room experience for pirate lovers. The customized rooms are totally unique and made for the ultimate Pirates of the Caribbean fans. The furniture and accents all pay homage to the famed franchise and classic Disney attractions. Part of the theming includes stacked crates in place of a standard dresser and a barrel for additional ambiance. The beds are made to look like pirate ships so they have a mast and rigging as each headboard and glowing lanterns below the sails on port and starboard. The pirate rooms at Caribbean Beach are totally unique because, like the Royal Guest Rooms at Port Orleans, they add much more magic to the Disney experience for young buccaneers living their pirate adventure fantasy. 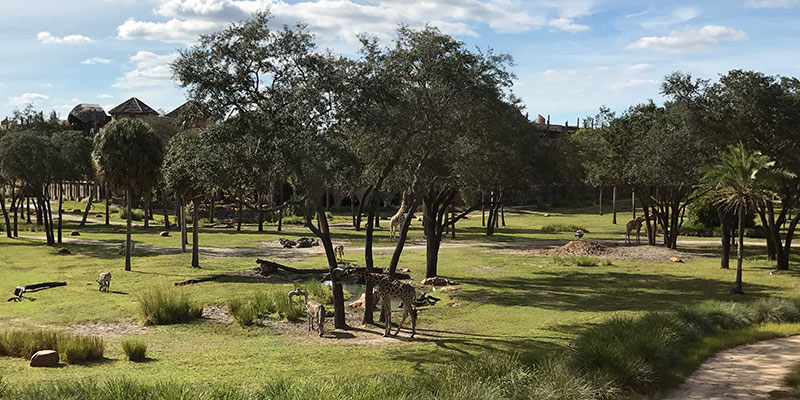 Perhaps one of the most coveted rooms at Walt Disney World are the ones in Animal Kingdom Lodge with a Savannah view. There are plenty of other types of views in the hotel, but the Savannah view may be the biggest reason if not the only reason many guests choose to stay at the resort. Not that Animal Kingdom Lodge doesn’t have a lot more to offer, but the big draw is the rooms where the animals are right outside. The idea of waking up to a Giraffe standing by your balcony is too exciting to pass up.

The Savannah views are a nice thing to wake up to in the morning, especially if you like to sip coffee outside before starting your day. Just take a look above this was our view when we stayed in these rooms for our honeymoon! For more on staying at this resort read Everything you need to Know about Animal Kingdom Lodge.

Among the value resorts, the greatest value, the best theming and the most fun can be found at the Art of Animation. The hotel, which began as a phase two of the Pop Century resort still has rooms in the original buildings which mirror the other resort’s architectural design. However, the subsequent buildings constructed to complete the resort were made totally different.

The rooms are family suites with indoor entry. They are themed to animated classics like The Lion King, Finding Nemo, and Cars. However, the Cars and Finding Nemo suites are by far the best in theming. Each suite has the artwork and specially chosen thematic details that make the suites exciting for young Disney fans. The one-bedroom suites can easily accommodate six sleepers. For more on this resort read our Art of Animation Resort Review.