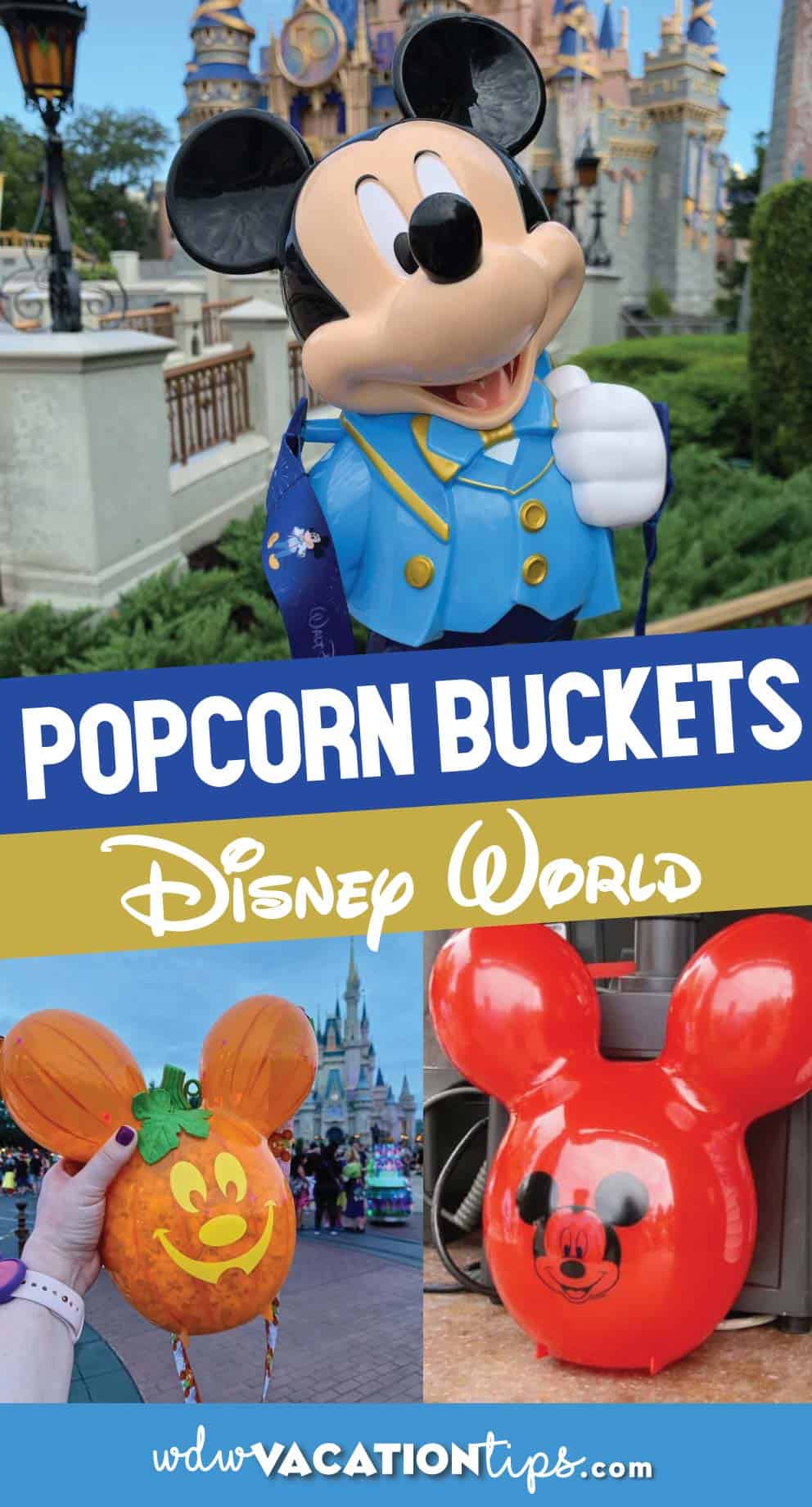 You may have noticed this growing trend of popcorn buckets at Disney World. They have been around for ages but lately, they are basically turning into toys filled with popcorn. I love that they are making out to be fantastic collector’s items. I have a couple of Disney popcorn buckets that made office shelf status!

The whole process is simple. You get your popcorn, get discounted refills, and have a fantastic souvenir to take home in the end. So while these Disney souvenir popcorn buckets will run you on average about $15 a pop plus popcorn you still, in the long run, may come out saving money. Popcorn buckets are always changing at Disney World and the styles vary by season.

Where to Buy Disney Popcorn Buckets

You can purchase Disney popcorn buckets at any of the locations listed above. However, if you want to simply add to your collection or buy one that was sold out on your latest Disney trip, you can easily search for them on websites like eBay and Amazon.

For example, a simple search on eBay for “Disney Popcorn Buckets” returns over 4,000 results, with many designs such as Onward, Frozen Han Solo, Cinderella’s Carriage, and Haunted Mansion being some of your available options. While these can be more costly than what you’d pay in the parks, you also have a better chance of getting popcorn buckets you normally wouldn’t be able to such as the “it’s a small world” version that was only available in Tokyo Disney.

Amazon also has some available, although the selection isn’t as huge. Many of these include off-brand Disney buckets, so this may be better suited if you wanted to own something Disney-related just to have in your possession. Popcorn buckets are not currently available on Shop Disney’s website, however, that is always subject to change.

How Much Do They Cost?

On average, Disney popcorn buckets will cost anywhere from $10 to $25 depending on the type of design.

Like I mentioned early we find the average price of these buckets is around $15 but can cost anywhere from $10 – $20. When you get a bucket refill it will cost you $2. This is a bargain considering the standard price for a box of popcorn now costs $5 with the recent price hikes! Popcorn buckets are refillable at a discounted price for your length of stay. No matter the park or cart you originally bought your popcorn buckets at it can be refilled at any location that sells popcorn.

If you want to be adventurous with your popcorn lookout for flavored popcorn at Epcot. Flavored popcorn refills are available for the same price as regular popcorn. In Epcot look for a cart right outside the Imagination Pavilion. This special cart offers a variety of flavored popcorn. Plus don’t forget to head to the Canada pavilion, it has Maple-flavored popcorn.

Where to Refill Popcorn Buckets at Disney World

Fortunately, there are many areas throughout the parks where you can refill your popcorn buckets. Best of all, you don’t have to return to the same location you bought your popcorn to refill it. This means that any popcorn bucket purchased at Magic Kingdom can easily be filled at Hollywood Studios and vice versa.

There are a slew of popcorn refill locations scattered around the parks. Here’s a list of all the locations broken down by park:

While you can purchase and refill your popcorn buckets at Disney Springs, the locations themselves change, however, the carts that usually sell ice cream and other traditional Disney snacks also sell the popcorn buckets.

While there are a variety of popcorn buckets around the parks, you should be strategic when it comes time to find them. It’s unlikely that you’ll find a Star Wars-themed one in Magic Kingdom, so if you’re on the hunt for something Star Wars-related, your best bet is to visit Galaxy’s Edge in Hollywood Studios.

This strategy really only applies to themed popcorn buckets. Basic designs such as seasonal ones will usually be found at all the parks, however, they may be more concentrated in one area over the other.

The popcorn buckets at Disney change routinely based on the season. So, you’ll find Halloween and Christmas-themed buckets. You also may be able to find popcorn buckets themed to the parks themselves, as well as popular Disney films or events. We’ve recently seen the following at the parks:

The premium buckets, which are usually themed to certain characters and events like mentioned above, tend to sell out fast. While they do re-stock at the parks, it’s best not to leave it up to chance. If you really want that Mickey balloon popcorn bucket, don’t wait to buy it because it could be sold out when you go back.

This Mickey Pumpkin bucket debuted for the first Mickey’s Not So Scary Halloween Party in 2018! Of course, we had to snag one right up! It was $18 and qualifies for the $2 refill program!

Check out Pluto’s adorable Christmas sweater!! He is just too perfect to say no to! You can access the popcorn from the back of Pluto.

Of course, we have to show off the brand new to 2018 holiday season, Santa Alien popcorn bucket. Thankfully these cuties have stayed in stock longer than their regular attire counterparts. The regular alien popcorn bucket that debuted with the opening of Toy Story Land sold out in hours and hasn’t been seen back since. His mouth pops open to reveal the popcorn packing inside!

Star Wars fans will probably want the AT-AT bucket. We so far have only spotted this guy at Hollywood Studios, fitting as this will be the new home to Star Wars Land coming in 2019.

Are They Worth It?

In my opinion, popcorn buckets are a great investment for the duration of your Walt Disney World vacation, especially since you’re only paying $2 per refill. Usually, a bag of popcorn at Disney costs $5.25, so the money you’re saving per refill could easily cover the cost of bottled water throughout your trip. Furthermore, it’s a snack that makes you really feel like you’re getting your money’s worth since it can’t be eaten in a few small bites like an ice cream bar.

Disney popcorn buckets are kind of like the refillable mugs you can purchase at the Disney resorts. As long as you’re going to get your money’s worth, it’s a great investment.

They’re also great from a Disney collection standpoint. A lot of Disney fans display their popcorn bucket collection throughout the house, most notably in the kitchen or a Disney-themed office or workspace.

Can You Bring Old Popcorn Buckets Into the Disney Parks?

However, Disney adds an additional ingredient to the Pop Secret popcorn called Flavacol, which is a brand of popcorn seasoning. This seasoning essentially just takes like a combination of butter and salt, but it sticks to each popcorn kernel better, giving each bite a lot of additional flavors. Best of all, if you want to pop your own Disney popcorn at home, you can buy Flavacol on Amazon. Click here to check it out.

On top of this, you can purchase a few different flavors of popcorn around the parks. For example, you can purchase maple-flavored popcorn in the Canada Pavilion in Epcot, as well as sour cream and chive, cheddar cheese, and buffalo bleu cheese in Future World near Journey Into Imagination with Figment. Guests can also purchase caramel popcorn at Karamell-Kuche in the Germany Pavilion. While this isn’t a refillable popcorn location, it’s worth mentioning.