What a better way to ring in the new year than at Walt Disney World? Fair warning this is an insanely crowded time as everyone wants to get in on the action for Disney’s New Year’s celebrations. We recommend getting where you want to go early, as the parks do fill up to capacity and will start phased closure. This means that yes, they really do have to turn people away. 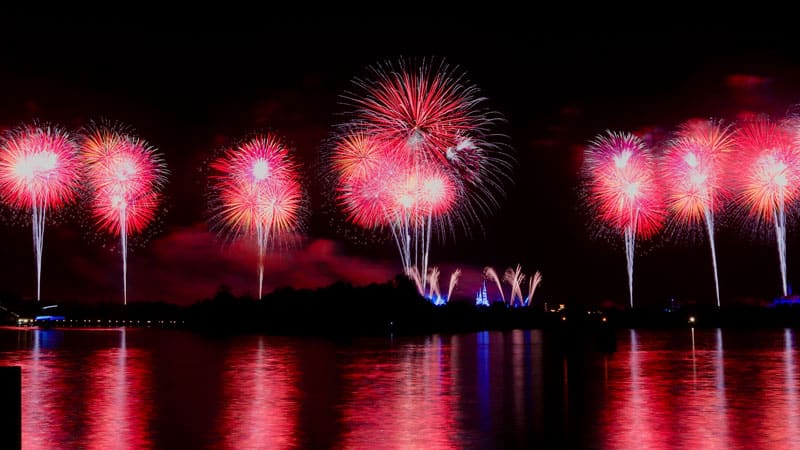 Again, I have to say it as a warning this will be the busiest park on this night. You have two special options the first is boogie down at a pair of DJ dance parties followed by catching the Fantasy in the Sky fireworks display.

Magic Kingdom Park rocks out with DJ dance parties. Guests are invited to “grab your partner” in Frontierland for a spin around the dance floor or catch the futuristic beats in Tomorrowland. Guests can stake out their favorite viewing space as the “Fantasy in the Sky” fireworks show returns for two nights only (in place of “Happily Ever After”) to light up the night leading to the midnight countdown. Celebration nights: Dec. 30 & 31, 2019; “Fantasy in the Sky” will also be shown at 6:30 p.m. each night.

Note: The Disney Parks Blog will host a livestream of “Fantasy in the Sky” beginning at 11:50 p.m. ET on Dec. 31. Visit DisneyParksBlog.com for more information.

Fantasy in the Sky Fireworks

Head to your favorite viewing spot to watch this beloved, fan-favorite light up the night sky. On December 30th and December 31st, 2019, beginning at 11:50 PM. Additional shows will take place both nights at 6:30 pm. I HIGHLY recommend catching the show on the 30th as it is far less crowded. We highly recommend skipping the crowds and watch the fireworks from one of the Disney Magic Kingdom resorts.

Anticipate an evening chocked-full of activities, from revelries across the nations to live music to fireworks shows. So let’s break down the three main events happening at Epcot on this day!

Celebrations Around the World Showcase

Who says you can’t ring in the new year more than once? As the clock strikes midnight in each country’s respective pavilion, listen for a festive announcement and gaze skyward for a colorful burst of fireworks to appear.

If you’re looking for lively dance parties, be sure to take a stroll around the World Showcase to encounter a variety of themed events in several country pavilions.

Delight in live music at this al fresco venue, located near the lagoon.

Gather around the World Showcase Lagoon to see Epcot Forever at 11:40 PM, followed by a countdown to 2020 and a special New Year’s Eve display.

2019 will be a year long remembered at Disney’s Hollywood Studios with the debut of Star Wars: Galaxy’s Edge in August and the new attraction Star Wars: Rise of the Resistance earlier this month. Magic from that galaxy far, far away will continue on New Year’s Eve as a special countdown will lead to a midnight performance of “Star Wars: A Galactic Spectacular,” the nighttime show featuring scenes from Star Wars films paired with fireworks and special effects.

Take a walk on the wild side for a fun and festive time as Disney’s Animal Kingdom stays open until midnight and DJs keep the night moving at Discovery Island, DinoLand U.S.A. and Asia. Be watching the iconic Tree of Life for a special countdown to midnight.

Disney resort hotels will ring in the new year with a bevy of special events and dining opportunities, including:

Let us know in the comment section below if you have ever spent your New Years Eve at Walt Disney World? Would you go back and do it again?!