Three-eyed Toy Story Aliens take guests on a whirling flying saucer ride in toy rocket ships as part of Alien Swirling Saucers, one of the new attractions inside Toy Story Land at Hollywood Studios. As you become an honorary toy inside the new land, head all the way down to Alien Swirling Saucers. It’s a play set that Andy won at the Pizza Planet restaurant. The new attraction whirls and blinks with colorful lighting, electronic space music, and nonstop fun. In total there are 8 different songs you can zip around to. 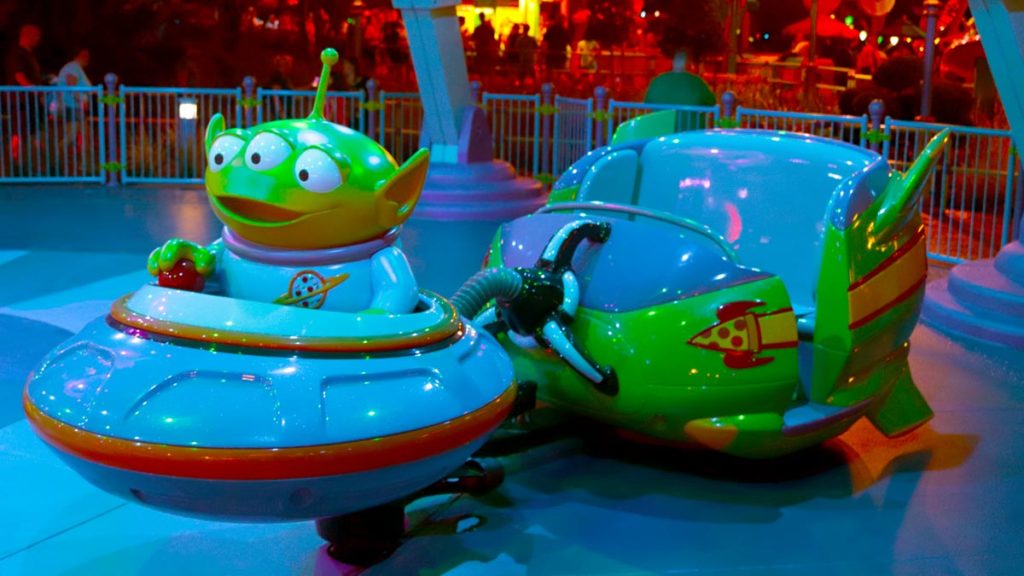 What to Expect on the Alien Swirling Saucers

Alien saucer pilots are straight out of the Toy Story movies, with their pointy ears, three eyes, short antennae and facial expressions designed to convey surprise or delight. Each extraterrestrial has hitched its flying saucer to one of 22 rocket ships. Together you will spin through the Pizza Planet galaxy.

With “The Claw” dangling overhead, you will climb aboard one of the rocket ships. Hover in Pizza Planet’s version of “deep-dish space” for an out-of-this-world saucer whirl to the beat of new versions of Toy Story songs and musical themes. I like the new techno switch up of these Pixar classic songs. Be sure to prepare yourself because “When She Loved Me” is in the loop, talk about a tear jerker. During the adventure, the Aliens will spin you around toy icons like Planet Pepperonia and a pizza-inspired space station. If you hadn’t already picked up on it there is a lot of pizza inspiration in this area.

After Alien Swirling Saucers, guests can pose for a photo with a Buzz Lightyear action figure. You can’t miss him because he stands more than 14 feet tall on top of toy building blocks near the entrance to his Star Command Space Station play set. Also as you leave, take note of the toy robot guards flanking the Pizza Planet-inspired marquee.

Inside Star Command, there are buttons to push, dials to turn and a switch to toggle for audio and visual effects. His creativity never flagging, Andy built a toy gantry with his Construx toy pieces that guests use to traverse from Buzz’s command center to the Swirling Saucers game.

Guests who are spin-averse can swirl vicariously by watching from the viewing area in between and around the play set. 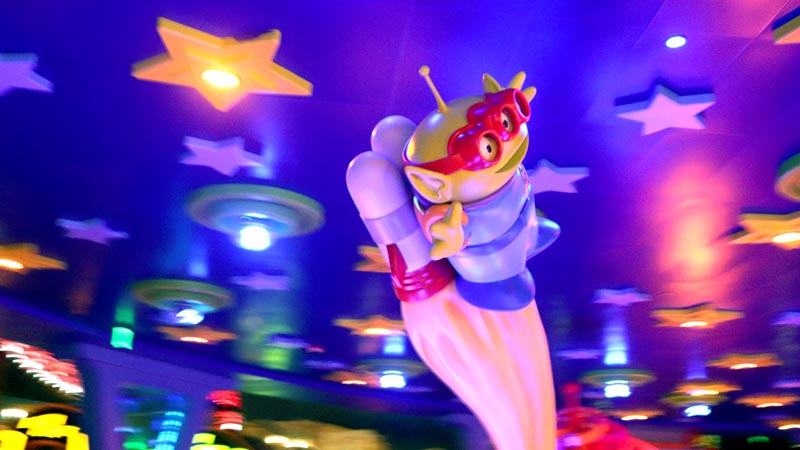 After a spin on Alien Swirling Saucers, pose for an out-of-this-world selfie with a stationary, photo-ready green Alien in its colorful saucer just outside the attraction. Plus be on the lookout for more toys of all makes and sizes. You will uncover anything from a 10-foot-diameter “rubber” ball to colorful Cooties. These have been carefully placed by Andy among the landscape of overgrown grasses, toy shrubs and play set trees throughout Toy Story Land are perfect for pictures.