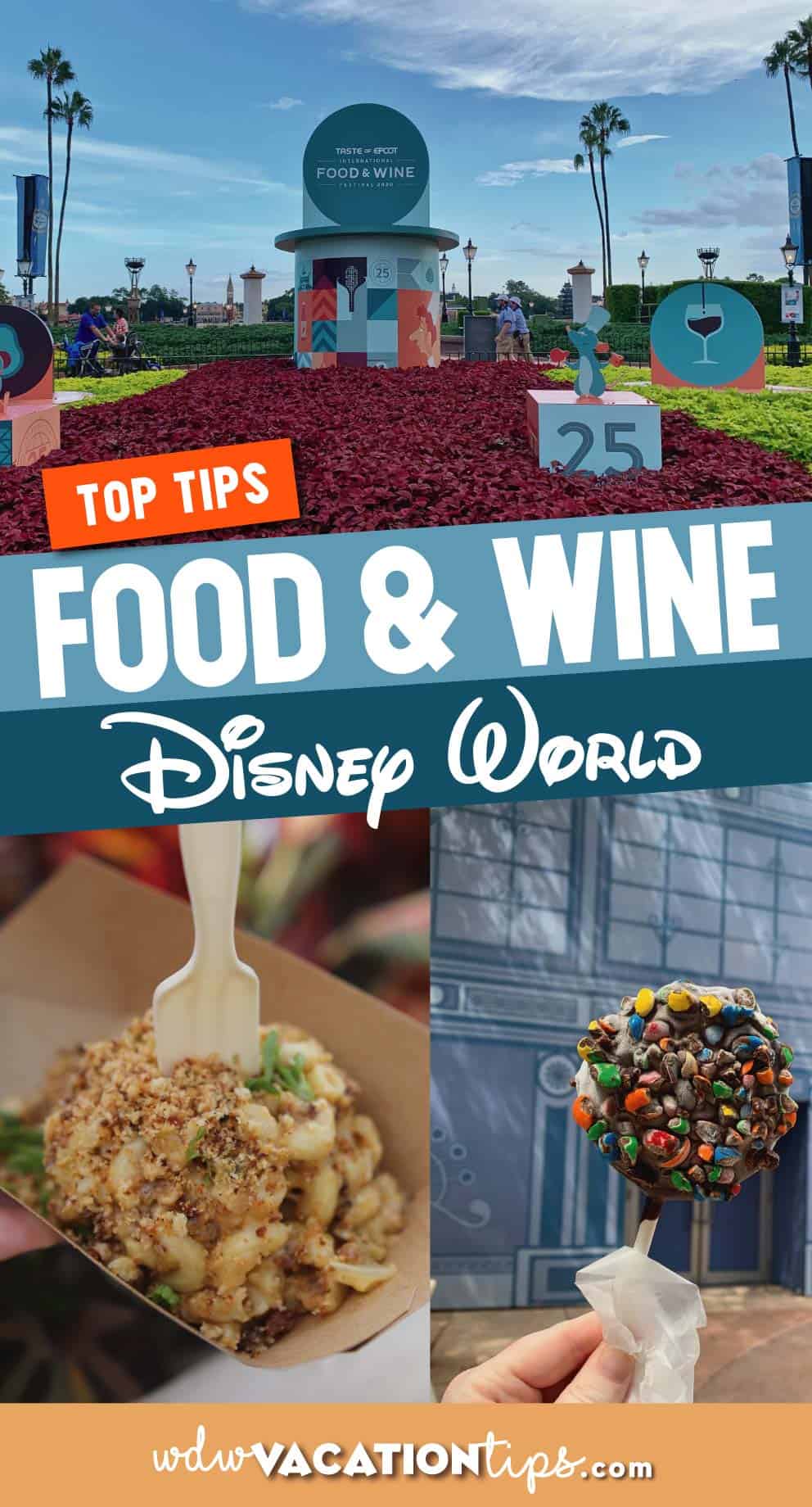 July 15th starts my favorite time of year at Walt Disney World – the International Food and Wine Festival at Epcot! This festival takes guests around the World Showcase and offers up unique and delectable assortments of cuisines and beverages that are unique to different parts of the world. This year, the International Food and Wine Festival runs from July 14th – November 19, 2022. This festival is where culture and cuisine come together in a perfect blend *chef’s kiss*

If you’re planning on attending the Food and Wine Festival this year, here are some helpful tips so you can make the most out of your experience.

You should also map out where you can find each of these kiosks and if there are any special speakers or events taking place during the event.

The costs of eating around the world can add up fast. And as you can see from the list above, there are a lot of great selections to choose from. On average, the food available at each kiosk costs between $4-$9, with drinks costing upward of $10. These are usually small plates, which are big enough to share but can add up quickly if you’re purchasing multiple things to try or for multiple people in your party. These costs exclude the price of your park admission, which on average, can be around $126 per person for the duration of the festival.

Read more: How Much Does it Cost to Drink Around the World at Epcot?

If you can, try to share food whenever possible to help keep your costs down. Also, by sharing food, you won’t get as full as fast. My husband and I once tried to eat around the world and by the third kiosk, we were so full and bloated that we just ended up skipping over a lot of the dishes we were interested in trying because we simply couldn’t eat anymore.

In addition to sharing food, try to avoid ordering something just because it’s trendy or available. I know Disney has a lot of food you can’t get elsewhere, but take it from me — there’s so much to enjoy at this festival that it’s not worth filling up on stuff you didn’t actually like or because you just wanted to try it for the ‘gram. Save room for what you’re truly in the mood for because this will be a better experience for you all around.

Read more: Best Things to Eat at the Epcot Food and Wine Festival

If you’re doing the Food and Wine Festival, you have to get a passport to go along with it. Trust us, it adds so much fun to your overall experience! The passport lists everything that’s available at the festival so you can check off what you’ve already tried. It’s a fun little way to keep tabs on what’s leftover and your kids will also get really into it.

The passports also have different activities listed in it that when you complete, you can get a prize.

5. Try to Avoid Heavy Foods (If You Can)

Intense heat and a lot of walking – are two things that don’t complement heavy dishes. Try to opt for lighter meals during the day and keep the decadent, heavy dishes for dinner.

The parks are always a lot busier on the weekends than during the week due to the fact that many people start their vacation on Saturday or Sunday. Likewise, a lot of locals visit the parks on the weekends since they’re off work. While going during a weekday isn’t going to guarantee an empty park (especially during the summer), what it will cut back on is the party atmosphere that can develop during this festival (especially at night). There have been many times that I’ve been hanging out in the Mexico pavilion toward the end of the night and felt like I was back in college.

While this is a fun and unique festival, anything that involves heavy drinking is going to have some party crashers; it’s just part of the territory. Still, you can help avoid this a lot more during the week than you can on a Saturday night.

7. Spend Some Time in France

This year’s festival is exciting because the new Remy’s Ratatouille Adventure will be opening during the tail end of the festival on October 1, 2021. Chef Remy, as we all know, adores all kinds of foods, so you best believe he’s become the new mascot for this year’s event! The France pavilion will be getting some extra love this year with the opening of this ride, which will shrink guests down to the size of Chef Remy as he zips through the bustling kitchen of Gusteau’s restaurant.

While guests attending the festival prior to the ride’s opening won’t be able to experience the attraction for themselves, we still recommend checking it out as you can see the signage of the area. It’s pretty cool to see how much the pavilion has expanded, especially because it didn’t look like there was a ton of room to begin with! Just goes to show how much Disney really can add to the parks, right?

Using cash or even your credit card at every kiosk gets old real fast, especially if you’re trying to rush around to different booths to get food for your entire party. We recommend picking up a festival gift card that has a cord attached for easy wear around your wrist. Not only will this be easy to use when you go to make a purchase, but they’re a lot less likely to get lost or accidentally misplaced like other payment methods. Gift cards are also a great way to adhere to your budget!

You will only be able to purchase certain items during the Food and Wine Festival, such as certain wine glasses, Remy-inspired cookware, t-shirts, pins, and even Spirit Jerseys. Usually, a new set of Minnie Ears gets released just in time for this festival and I always look forward to getting them to add to my collection!

10. Bring Your Own Set of Reusable Utensils (And a Water Bottle)

Read more: How to do Disney World on a Budget

It might seem like a silly one to add, but make sure to have fun at this festival. Yes, it will be crowded and yes, people will be drinking and yes, the lines for kiosks will be long (some longer than others), but this is Disney World, and all of that is kind of par for the course during any special event. This is a really unique experience that you won’t be able to find anywhere else in the world.

When my husband and I went back in 2018, we had just finished dinner at Tutto Italia Ristorante and walked out to find out that Air Supply was playing during the Eat to the Beat concert series. We just stood there in the rain belting out the lyrics to All Out Of Love with a group of people. We were wet, hot, sweaty, and so full of spaghetti and never happier because where else in the world can you walk a couple of feet from your restaurant and sing along with Air Supply?

The International Food and Wine Festival is one of the coolest experiences out there and with these tips, we hope you have the best time ever!