Everyone is always dying to hear what’s next at the Walt Disney World Resort! The new magic is what us Disney fans look forward to seeing and part of what keeps us coming back to the parks year after year. This is where the Disney rumors start buzzing about upcoming attractions, hotels, restaurants and more!

The talking Mickey Mouse that appears daily in Town Square Theater is expected to be replaced with a standard non-talking Mickey in May. This is surprising news to hear buzzing since Mickey has been such a hit with guests.

Ever since the Main Street Electrical Parade left, people have been dying to see a new night-time entertainment option return to this park. According to the rumors flying it seems that this time an entirely new parade will be developed to fill the empty spot. The bad part is that we likely won’t see this parade come to life until the 50th anniversary in 2021.

It has long been talked about Disney doing a major overhaul of Tomorrowland at Disney World. The details of this have been all over the place. Some reports say it will include updating scenes in the Carousel of Progress. Of course with Stitch’s Great Escape moving to seasonal status this ride is also up on the chopping block.

This super exclusive club found at the Disneyland Resort may be coming to Walt Disney World. Recently an email leaked and it looks like a location at each park may be headed our way. Possible locations for these new Club 33’s would be the American Adventure at EPCOT, Dinoland at Animal Kingdom, and Adventureland at the Magic Kingdom.

After permits were recently pulled by Disney the rumors are spreading fast about a new Ratatouille attraction. The speculation is that it will be added to the land behind the France pavilion in Epcot.

Guardians of the Galaxy Attraction (Confirmed at D23 Expo)

You can say goodbye to Ellen’s Energy Adventure and hello to the Guardians! Permits have been filed with the South Florida Water Management District as well as Orange County under the code name “Project S.” The area affected includes the current Energy Adventure ride as well as a large portion of land that lies behind it at EPCOT.

With the wild popularity of the latest Pixar movie, Coco, rumors are starting to spin about a Mexico overlay. Obviously, the Gran Fiesta Tour would lend perfectly to this. Let’s face it this ride isn’t the most popular of Epcot attractions and could use a little snazzing up. They have already added a Coco display inside Mexico so maybe this is a sign that this rumor is true!

Like France, the UK pavilion at EPCOT is expected to gain an attraction as well. The theme of this new ride has been all over the place. It seems like most are leaning towards a Mary Poppins themed attraction. There has also been mention of a Brave themed ride as well.

Addition of a New Country

I know you may be rolling your eyes at me, it has been rumored that a new country will appear at Epcot for years. Odds are getting more and more likely with the new overhauls announced for Epcot. Currently, Brazil is the front-runner with this new rumored pavilion and it is said will also feature a ride.

Buzz is now spinning around a third restaurant for the Japan Pavilion at EPCOT. This is supposed to be a signature restaurant that will reportedly specialize in seafood and steak. The thought is that it will take up a portion of the existing Mitsukoshi Department Store and will feature several unique rooms.

This long-standing fireworks show at EPCOT may be finally coming to an end in 2020. As another long rumored change, we still aren’t quite sure exactly what will end up happening here. Maybe something more along the lines of rivers of light or the potential of a drone show?

According to Jim Hill, Disney is looking to change Conservation Station to a Zootopia themed area. When this would happen hasn’t been exactly determined yet.

Rumors are swirling about a total overhaul to Dinoland USA. Could this be the new home for the long hoped for Indiana Jones ride? Maybe Chester and Hester will finally be saying their goodbyes to make place for a new E Ticket Ride. We are going to have to sit tight on this one until more news is released.

The theories behind this one are very vague. The Great Movie ride officially closed August 13, 2017.

We know this one is coming but we just don’t know when yet or to what. It seems like any changes to the name of Hollywood Studios will be held until at least the new announced lands of Star Wars and Toy Story open.

Select Guests Will be Able to Purchase Additional Fastpasses

It was recently leaked that a popular survey website was polling people on their thoughts of a Star Wars themed hotel. The survey even included concept art of what it may look like inside!

People have long hoped for a monorail expansion, and they may get something very close! Disney has filed permits with the city and started what is suspected to be under construction earlier. 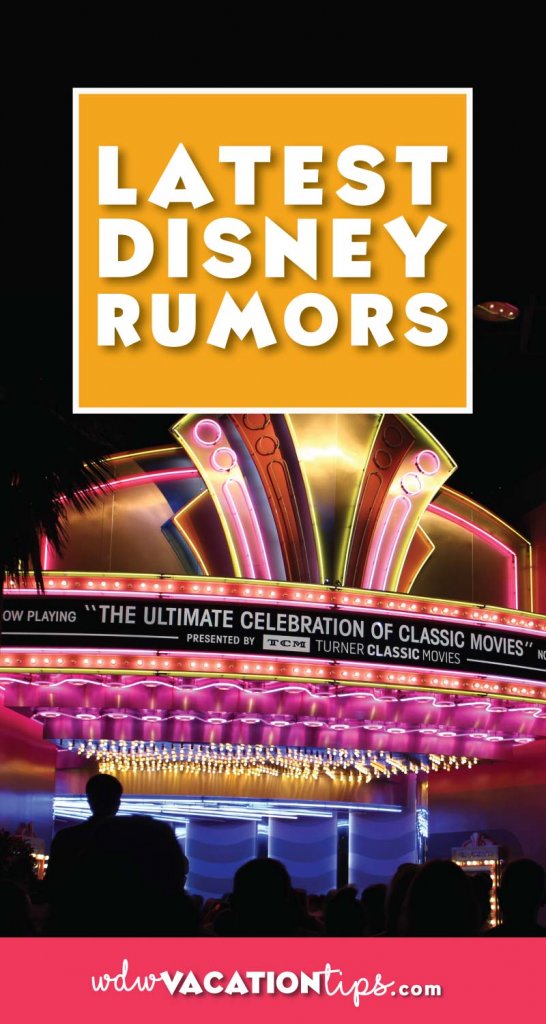