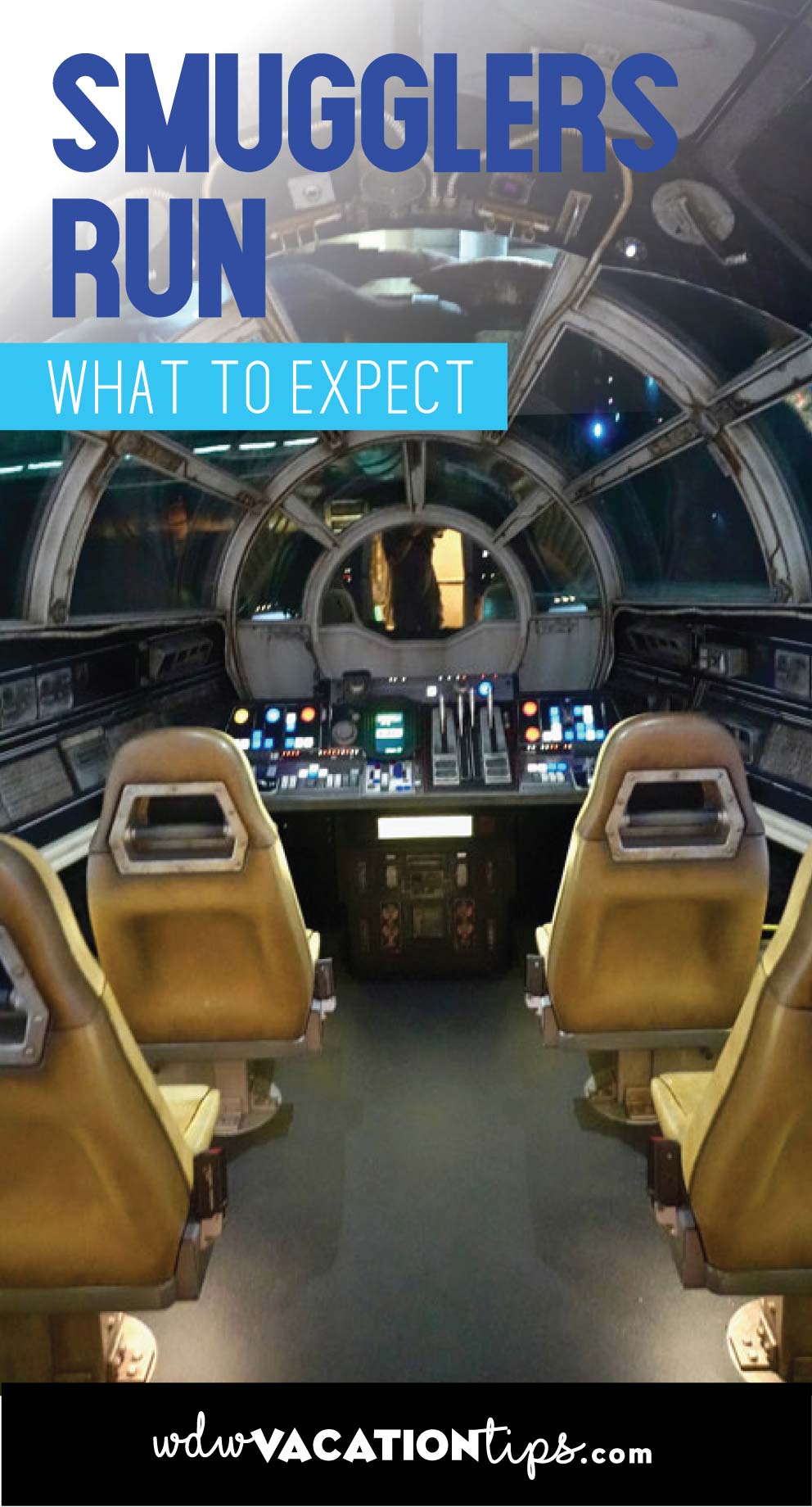 With new lands and new rides at Disney World, the first thing I always worry about is what to expect and will I be able to handle it. I am a chicken myself who avoids major drops and spinny rides. So after zipping through the galaxy on Smugglers run a few times I am here to share on what you can expect on Millennium Falcon: Smugglers Run ride in Star Wars Galaxy’s Edge at Disney’s Hollywood Studios.

What is Millennium Falcon: Smugglers Run

Millennium Falcon: Smugglers Run is a simulator ride. You step inside the cockpit of the Millennium Falcon and get to take it out on a mission. Yup, the same infamous ship that made the Kessel run in less than 12 parsecs! When you walk down the passageway leading to the ship you really feel like you are boarding the Millennium Falcon. I felt like it was a very realistic cockpit without feeling overly claustrophobic. 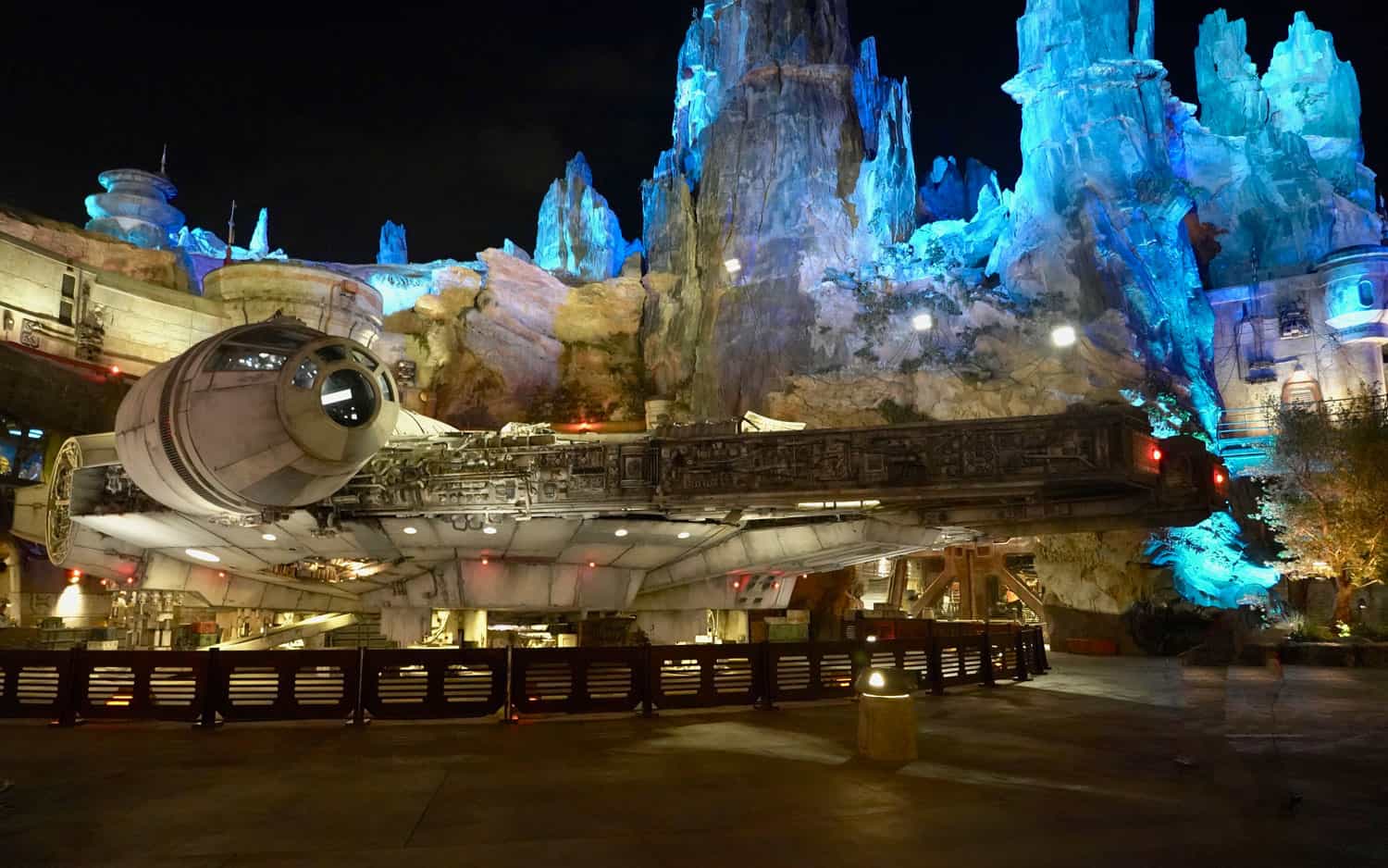 If you’re concerned about motion sickness I would compare it to Mission Space (the easy side) at Epcot. I will say it is much more high tech than Misson Space, more realistic, and surprisingly doesn’t require 3-D glasses. Without the glasses, it does make it more seamless to the eye and therefore less motion sickness issues. I was surprised I felt great after getting off, Star Tours makes me a little wobbly and nauseous. I would say, if you find all simulators tend to make you sick, then it’s probably safer to skip this one.

Should you find yourself feeling less than great during flight it’s alright. Just close those eyes, take a series of deep breathes and grab the bar in front of you. The movement is much more subtle than you would think if you stop watching out the front of the ship. For research purposes, I gave this a try. Though I was very pleasantly surprised at this ride. For comparison, on Flight of Passage, I always find myself closing my eyes and chicken out. The drops just feel too real sometimes!

The cockpit of the Millennium Falcon holds six people. Before you enter the ship you will be assigned a role for your mission. There is a total of three roles you could hold, let’s take a look at each one of them. 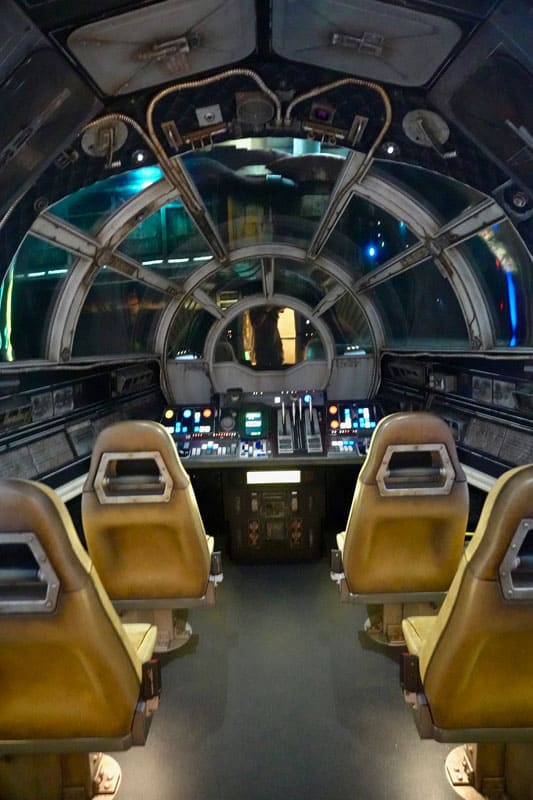 The two Pilots will work together to steer the ship and they sit in the very front! Those who are most excited about flying the Falcon will prefer to be the PILOT as this seems to be the most critical role and also has the front seats with the best view.

At the end of the ride, you will be able to push a button on the control panel to get the results of your flying stats! On the first run, the ride was very bumpy, due to overcorrecting and bad steering, which was extra apparent after a second ride with a much better pilot!

Gunners use triggers in the cockpit to blast enemy targets and sit in the middle row⁣. One is on the right and the other is on the left. You have the option of shooting in either manual or automatic mode, choose your style at the start of the ride. 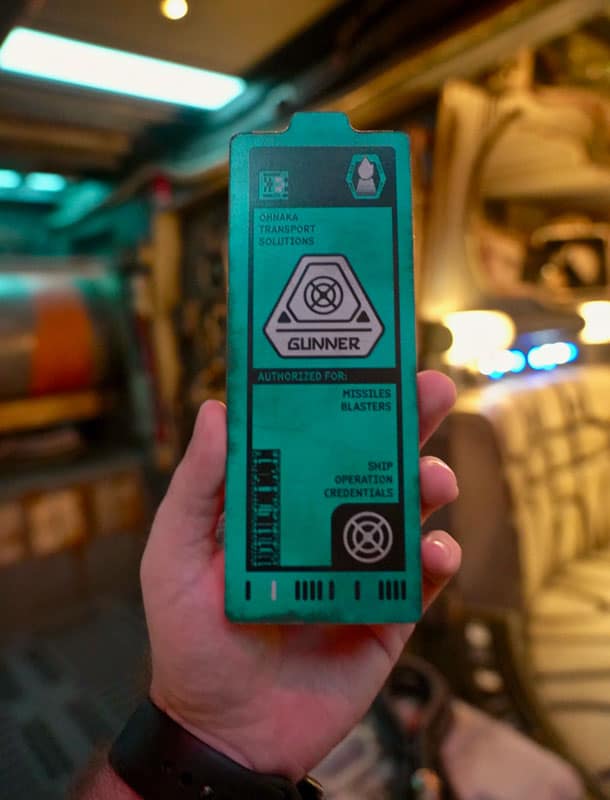 I have two complaints regarding being a gunner, all your buttons are on the side of your seat, which focuses your attention that way and you have a hard time seeing where the ship is going and doing your job at the same time. Second, you have no control over aiming only firing! As with the pilot, at the end of the ride, you can push a button and get your statistics and see how well you performed.

Engineers repair the ship as necessary and getting the cargo that we are after on this mission. Again, there is a right and a left engineer and your attention is focused on the side of the cockpit, watching for your visual cue to push buttons. On one run, we only had four people on board, so no engineers and the ride didn’t penalize us.⁣ In my opinion, this was the least exciting position to be in. However, you do have the mission-critical job! Engineer’s push the buttons to shoot the cables that attach to the train carrying the Coaxium!

Tips for Waiting in Line

Our first wait in line was forty-five minutes. There were some interesting things to look at. We even got to have a little interaction with Chewy who was looking at the repairs that needed to happen on the Falcon. Of course, as soon as they spotted the girls in front of us had on First Order ears they were fast to scramble away! 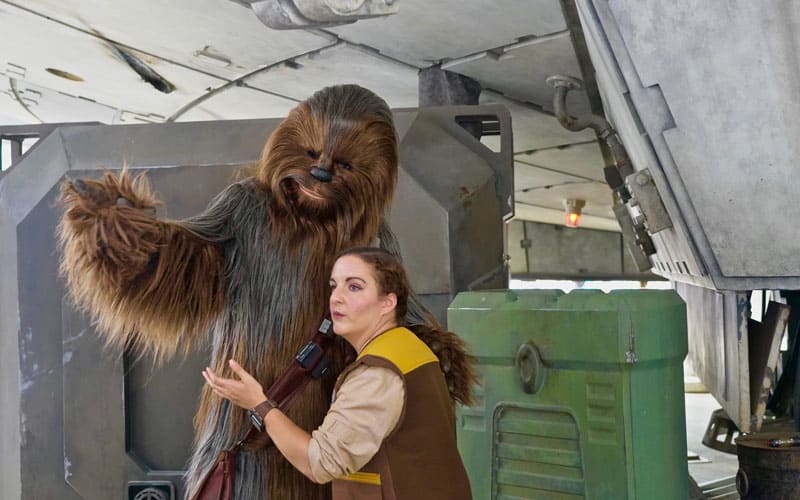 If you want to get interactive while in line, be sure to download the Play Disney App. I was busy snapping away pictures of everything in line my husband was collecting credits. At one point he even complained the line was moving too fast he couldn’t keep up playing along with the app. For Smugglers Run you will need to find and scan a series of bar codes hidden through the queue. You will also be asked some trivia along the way so detail is very important. 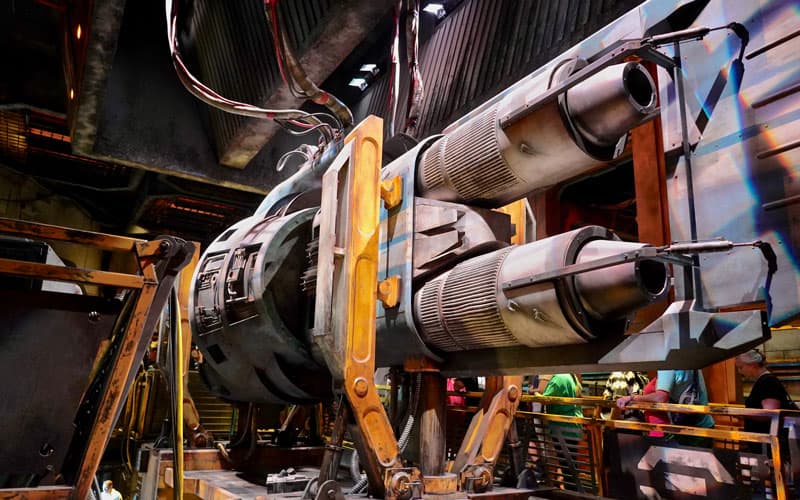 At one point you get great views to the outside and the top of the Millennium Falcon. This is a great point to stop and get some pictures, but don’t stop too long you are almost to the prize. After a cast member sorts you up into lines Hondo explains your mission. 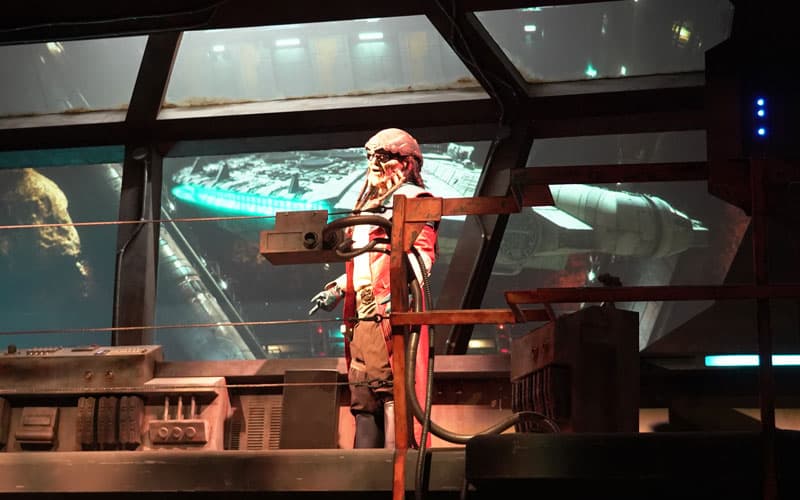 So just what are you supposed to do on your mission? Hondo Ohnaka is looking for discreet flight crews to deliver a backlog of hard-to-find items to a particular clientele. AKA we need to steal a shipment of Coaxium. Lucky us Hondo has struck a deal with Chewbacca to borrow the Millennium Falcon.

As the excitement builds you head to the area where you are given your assignment and boarding card. The boarding cards are color-coded and you take it to the final holding area where you wait for your color to be called to load onto the Millennium Falcon. Be sure to snap a photo in the iconic scene pictured below. 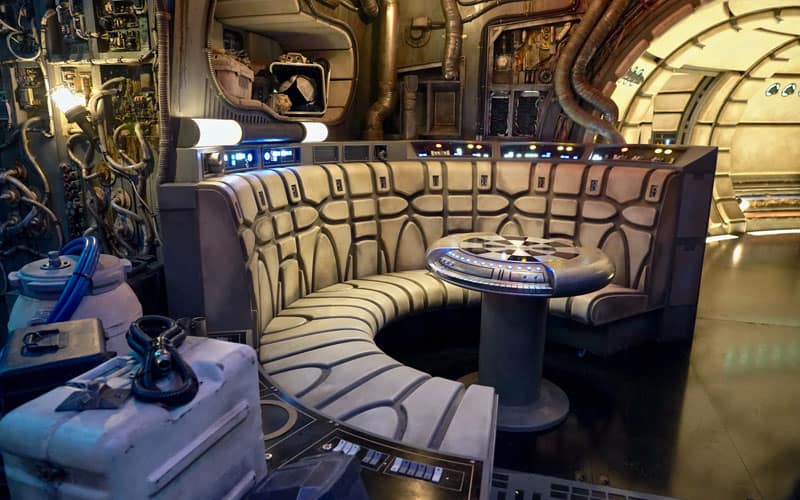