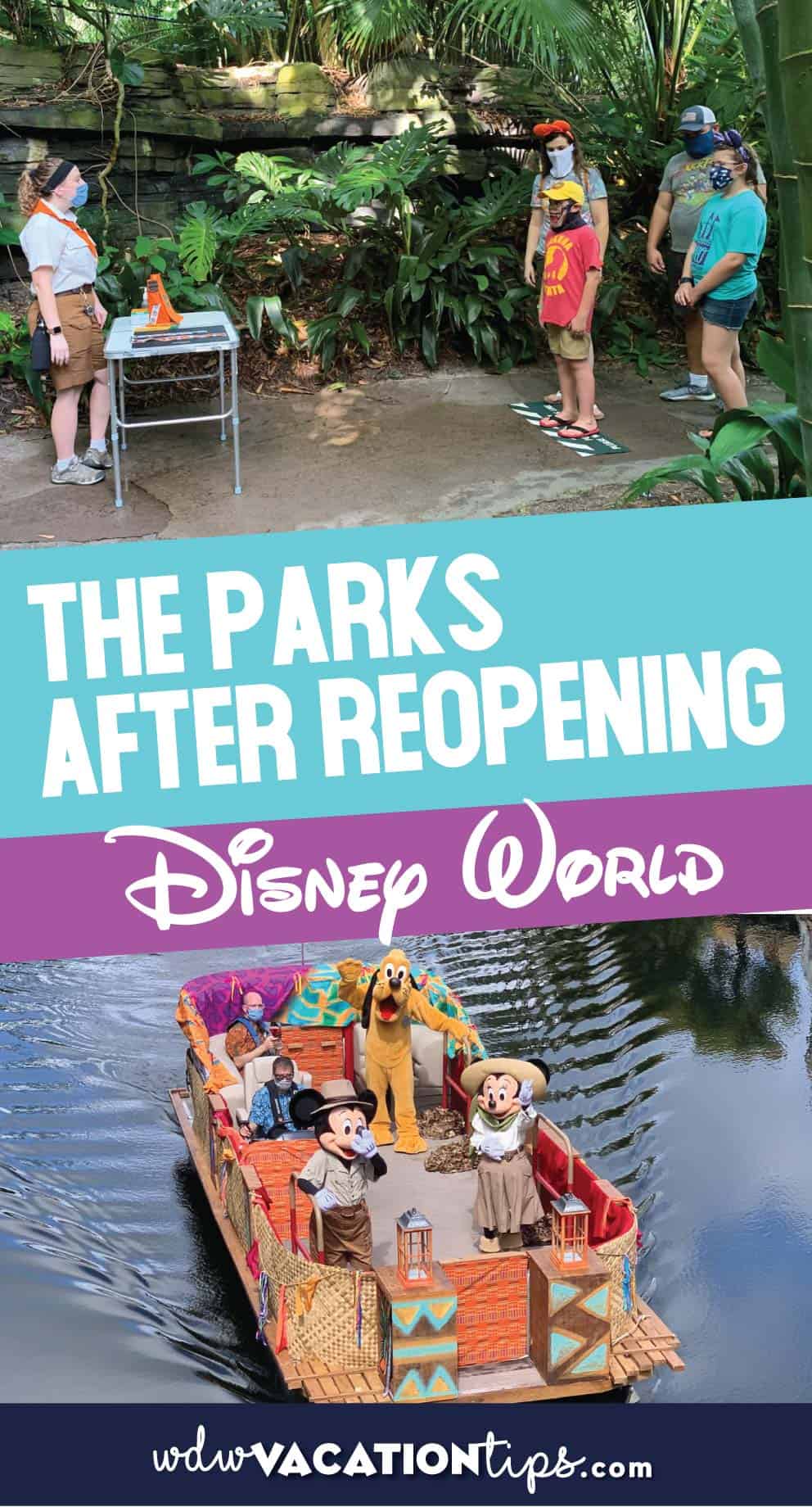 This weekend marks the official reopening of Walt Disney World theme parks. There are quite a few changes to the Disney World parks it will not look the same if you are planning a vacation this year. As well, there are a host of new rules including masks and social distancing that you will be expected to follow.

Let’s start from the beginning, you are now going to have to make a park reservation to visit any park at Walt Disney World. Reservations are currently for one park per day, no park hopping.

Arriving at the Park

We arrived at the parking entrance, and you will have to either pay for parking or show your annual pass to be scanned to enter. We were amazed to see that Disney was parking cars leaving a full space between each car, so you could easily socially distance when getting out of your car (I want to point out that when we had returned to our car, Disney had filled in the spaces with cars that arrived later than us.

The bad news, they are not operating the parking lot trams at this time. So you will need to walk to the entrance of the park. The good news is they seem to be filling in the front lots and keeping you close to the entrance so the walk really wasn’t all that bad.

We arrived at the park at opening time, but we were pleasantly surprised that everyone was keeping space between groups as they walked to the entrance. When we had last been to the Animal Kingdom, the new security area was under construction.

The first area that you walk into is where the old tram pickup and drop-off was. Here there are lines on the ground to keep groups safely apart, but they were able to handle the full amount of traffic and guide us to an open tent, where an employee quickly took our temperatures and directed us to walk forward to security.

There is no longer your standard Disney World bag check. Instead we were directed by staff to leave everything on us unless we were carrying an umbrella. We individually walked through a new high tech metal detector that scans for dangerous items. Once through security, we were amazed at the wide-open space, now in front of the ticket windows at the park.

As we approached the ticket area to have our MagicBands scanned, there were again lines on the ground to indicate proper social distancing. There was no wait for a cast member to scan our magic bands and we did not have to have our finger scanned. We also saw that cast members were routinely wiping down and disinfecting these touchpoints.

The first thing we noticed once inside the park was messages on all the trash cans, reminding guests to wear mask, wash our hands and maintain proper distance between guests.

Signage was also on the ground and on fence posts. We found most guests keeping their distance and we found it easy to navigate our way around and making sure that we stayed as far away as possible from other guests.

Let’s address masks, yes they are required at ALL times. No, you may not take off your mask for a quick picture. There is a mask patrol walking around to enforce this rule. Also, note that your mask must have ear loops. There were a lot of questions over neck gators in the previews but Disney has since officially said that they are not an approved face covering.

Face masks are allowed to come off when you are seated in a restaurant. Of course, this is to allow you to eat. As well you may take them off in a designated rest area. It seems that all parks have both outdoor rest areas as well as an indoor air-conditioned location.

Since it is Florida and it’s summer, we found our masks hot and I had the problem of my sunglasses fogging up several times. In hindsight next time I will opt for a mask that has a metal piece in the nose bridge so it can conform to my face better and avoid fogging.

We did feel the need to need a midday break from the masks. I made it from the park open until 11:00. That’s when we took a break to have a drink in a shady area away from others to take them off for about 15 minutes. This will be a factor during the middle of the day and with kids.

What Has Changed with Reopening

About every 10 to 15 minutes, a Health and Safety Reminder came over the loudspeaker reminding everyone to wear a face covering, maintain physical distance, wash their hands often, when coughing or sneezing cover your mouth and nose, and avoid touching eyes, nose or mouth.

As long as were are talking about basics, I don’t know if you have ever noticed that all the restrooms at the Animal Kingdom have doors to the building that you must open to access. This was created to provide a safe haven in the event of an emergency, such as an animal escape. Currently, all the doors are open, so you don’t have to touch them.

The first attraction that we visited was the Kilamanjaro Safari. At the entrance to the ride, there was a hand sanitizer dispenser. Also, all the way through the queue there are lines on the ground reminding guest of the proper social distance. As we approached the last 50 feet or so before the two load areas there are a metal and plexiglass partition erected between the regular and fast pass lines.

The barriers continued down to the load area. The safari trucks have thick clear plastic sheets between each seat row. The rest of the ride is the same as before, though I want to point out that picture taking is much more difficult to get a clear shot with those plastic barriers.

At the end of the safari there was also a hand sanitizer dispenser. On our second ride, we had to wait about 5 minutes to get to the unloading station, because the truck that was there was being cleaned. We watched several cast members wipe down each seat and plastic divider.

We next walked the Gorilla Falls Exploration trail. The animal ambassadors were out to answer guest questions. We asked if the animals were bothered by the humans returning to their domain after so many months, she told us that the older gorillas didn’t seem to mind at all and the younger gorillas seemed to be bothered more the guests were absent! Also out on the trail were the Wilderness Explorers. Their stations seemed the same, except they had lines on the ground keeping guests back a safe distance.

We walked from Africa to Asia, stopping to check out the view of the Tree of Life and the animal encounters along the way. We finally arrived at Expedition Everest. Here again, the loading area had metal and plexiglass barriers for each row.

We asked a cast member about the loading of the ride since every row on the safari was filled. We were told that a row would be left empty between each group, so I went for a ride! On my trip, I was in the last row and the only other riders were in the front two rows! Have you ever been to the Animal Kingdom and had no queue for Expedition Everest at 9:30 am? Not me!

As we walked over the bridge into Discovery Island from Dinoland we heard music and looked over the bridge to find Daisy and Donald Duck on a barge waiving to the guests. Later on the walkway from Pandora to Africa, we were lucky to see Mickey, Minnie and Pluto!

Character meet and greets are no longer a thing at any of the four Disney World theme parks but you will still be able to see characters on your trip. Here at the Animal Kingdom they kept them on boats that looped in the waterway going around in the Tree of Life.

Disney is keeping these as character floats a surprise and delight to avoid crowds of people. When you hear special music that is your key to know that characters are about to come out or close by. So if you want to see the characters have an ear out.

Dining in the Park

Disney is encouraging guests to use mobile ordering for food, to minimize your time in line. Mobile ordering can be found on your My Disney Experience App. For more on how to use you can read our guide.

Also, outside the restaurants offering it, they have a large sign where you can scan the location code. Walk-up counter service purchases have a plexiglass shield in front of the cast member. Currently, Pizzafari is being used as a Relaxation Station so it’s not open for food service.

Also lets, at this time, shows in the large theaters are not being held. This includes Festival of The Lion King, Finding Nemo, and Up! A Great Bird Adventure. Also, the Boneyard and Fossil Fun Games in Dinoland are not open.

Lastly shopping, I always save my shopping for just before I leave, so I don’t have to carry the bag around and it is a good way to cool off. When we walked by the Discovery Trading Company, they had doors marked for entrance and exit only and they were on opposite sides of the large store.

On our way out, we noticed that there was a line on one side of the building to limit the number of guests in the store. It looks like others had my idea. Even though the line was under a shaded overhang, we decided not to wait.

Well, that is a look at our first trip back to Walt Disney World. We spent a lot of time discussing the risks and what we would realistically be able to do at the Animal Kingdom. I am glad that we decided to brave the park, knowing that if we didn’t feel like guests were obeying the rules, we could simply leave.

It has been hard not visiting the Happiest Place on Earth for four months. There is a lot of differences to get used to for the foreseeable future, making a reservation to go to the park, no park hopping, no fast passes, and much of the live entertainment being eliminated. We will keep checking out the parks and reporting the changes as they happen. Stay safe out there!