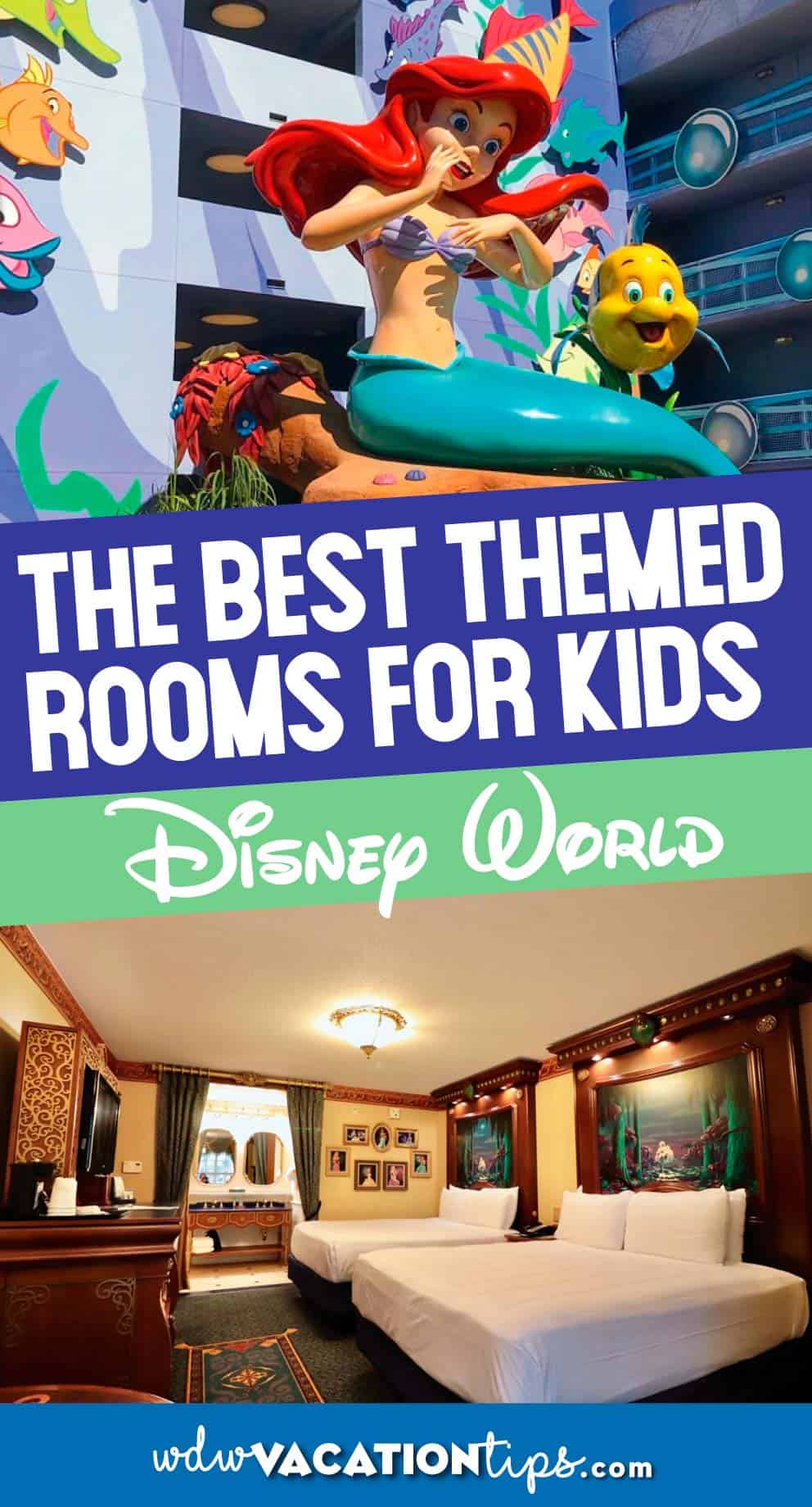 Hands down, one of my favorite parts about booking my Walt Disney World vacation is figuring out which resort I want to stay at. While each of them offer unique amenities, what matters most to me is the overall theme of the room.

When it comes to the Walt Disney World resort hotels, not only is there a room that fits every budget, but there’s one that’s perfect for every member of your party — especially your little ones! Below, I’ve ranked (just) a few of the best themed rooms at Walt Disney World.

If anyone in your party is obsessed with the Little Mermaid (like me) then this room will truly make you feel like you’re part of Ariel’s world. The theming of this resort hits you before you even unlock the door to your room. On the way to your room, you’ll pass by enormous statues of Ariel, King Triton, Sebastian and Ursula (pro tip – there’s also a photo op with Prince Eric’s statue!)

The rooms are completely themed to the Little Mermaid, with Ariel on the shower curtain and blue waves and bubbles on both the floor and bedding. The best part about this room? The beds are shaped like clamshells! Every part of this room takes you under the sea, which is why it ranks as number one on our list!

While we’re under the sea, let’s take a journey on the East Australian Current with Crush, Marlin and the rest of the gang over to the Finding Nemo Family Suites. These suits can sleep up to six adults – with one queen sized bed, one double size sleeper sofa and one double sized table bed.

Like the Little Mermaid standard room, the Finding Nemo Family Suites have an aquatic theme that showcases all your favorite characters from the film. You’ll find Bruce, Anchor and Chum on the shower curtain, as well as huge portraits of Nemo and Marlin on the wall behind your bed. One of my favorite things about this room is that they painted coral on some of the furniture. Between the bright colors, stencils and carpet that’s designed to look like moving waves, the Finding Nemo Family Suites are one shell of a place!

Pro tip: The Big Blue Pool is located near the Finding Nemo section of the resort. It is the largest pool on property and even plays music underwater! It’s a unique experience but be prepared because this pool is usually the busiest out of the three on property.

While we’re at Disney’s Art of Animation, let’s swing on over to another wildly themed room: the Lion King Family Suites. Located at the Lion King section of the resort, these family suites also sleep up to six adults and have a pretty similar layout as the ones themed to Finding Nemo.

What makes the Lion King Family Suite stand out is how tropical and perfectly themed it is to the 1994 movie. There are giant giraffes sticking out from behind the couch, green countertops, chairs that are shaped like leaves and footstools that have the lyrics to both Hakuna Matata and I Just Can’t Wait to Be King on them. Perhaps the coolest feature about the room is the table, which is painted with bright leaves and birds that trails all the way up the wall where the table bed folds down.

Rounding out the last room type at Disney’s Art of Animation are the Cars Family Suites. Like the rest of the rooms mentioned above, this themed room can also sleep up to six adults. Personally, this is my favorite section of the resort because the newly refurbished rooms really helped transform them into something much more immersive.

Since the refurbishment, the floors are designed to mimic the floor of a garage and all of the drawers are designed to look like toolboxes. The bathrooms are also themed to be a carwash, which I think is really fun! If your child is into cars, they’ll love this vroom!

While Disney’s Caribbean Beach Resort isn’t always the most popular hotel due to how sprawling the property is, it doesn’t mean it’s not a resort you shouldn’t check out. I’ve stayed here a multitude of times and hands down, my favorite thing about this resort are the pirate-themed rooms.

The room is primarily themed after the Pirates of the Caribbean film and is perfect for little ones who want to have a swashbuckling adventure at the Happiest Place on Earth. The best part about these rooms? The beds are designed to look like actual pirate ships!

Pro tip: This hotel offers the new Skyliner transportation, which can get you to Disney’s Hollywood Studios in just SIX MINUTES. Guests traveling to Epcot will have to transfer at Disney’s Riviera Resort, which will take you about 15 minutes in total.

I’m just gonna’ say it, Disney’s Port Orleans – Riverside is one of the most UNDERRATED hotels on property. Why? Because of the Royal Guest Rooms that are literally fit for a princess!

While the views for both the riverfront and bayou are gorgeous, I personally don’t think you can go wrong with any of the rooms simply because of how beautifully themed each one is. From the moment you open the door to your room, it’s like you’re stepping right into a fairytale. Portraits of your favorite Disney princesses including Tiana, Belle, Aurora and Cinderella line the walls, and gorgeous, royal artwork frames each headboard. The room just feels regal, with deep shades of red, blue and gold touching everything.

If you’ve ever dreamt of visiting the suite inside Cinderella Castle, look no further than the Royal Guest Rooms. They’re built for royalty!

Disney’s Wilderness Lodge is another resort that I feel doesn’t get the attention and love it deserves. This is one of the many Disney Vacation Club (DVC) resorts and it’s one of my personal favorites. One of the best themed rooms at this resort are the new Copper Creek Cabins. These cabins are designed to take guests to the Pacific Northwest, which make you feel like you’re out in the middle of nature as opposed to sunny Florida.

The Imagineers did a wonderful job of creating a living space that has such a distinct theme that’s perfect for nature lovers and explorers of any age. Each cabin has beautiful waterfront views, brick fireplaces, natural wood elements, and ceilings with exposed beams. It’s one of the coziest little getaways, especially during Florida’s colder seasons in mid-December to February when temperatures can dip down into the low 60s.

Like the cabins at Disney’s Wilderness Lodge, the Polynesian Village Bora Bora Bungalows make you feel like you’re basking in the sun on a remote island – not the middle of Orange County, FL. What I love most about these bungalows are the fact that they sit on the water, which makes you feel like you’re not really at the resort itself. While the overall theme isn’t over-the-top, the fact that it’s a tropical hideaway with gorgeous views in the middle of a resort ranks it as an honorable mention on this list.

All of the themed rooms mentioned here are what I love so much about Walt Disney World. Don’t get me wrong, I’m a fan of any weekend getaway and a decent continental breakfast but there’s something to be said about walking past a giant Ursula statue on your way back to your room or falling asleep in a pirate ship that creates an experience unlike any other. Most of all, there’s something to be said about seeing how fully immersed your child is in a room that brings the magic of their favorite films to life.

Did your favorite resort make the list? Let us know down in the comments what you think the best themed rooms at Walt Disney World are.