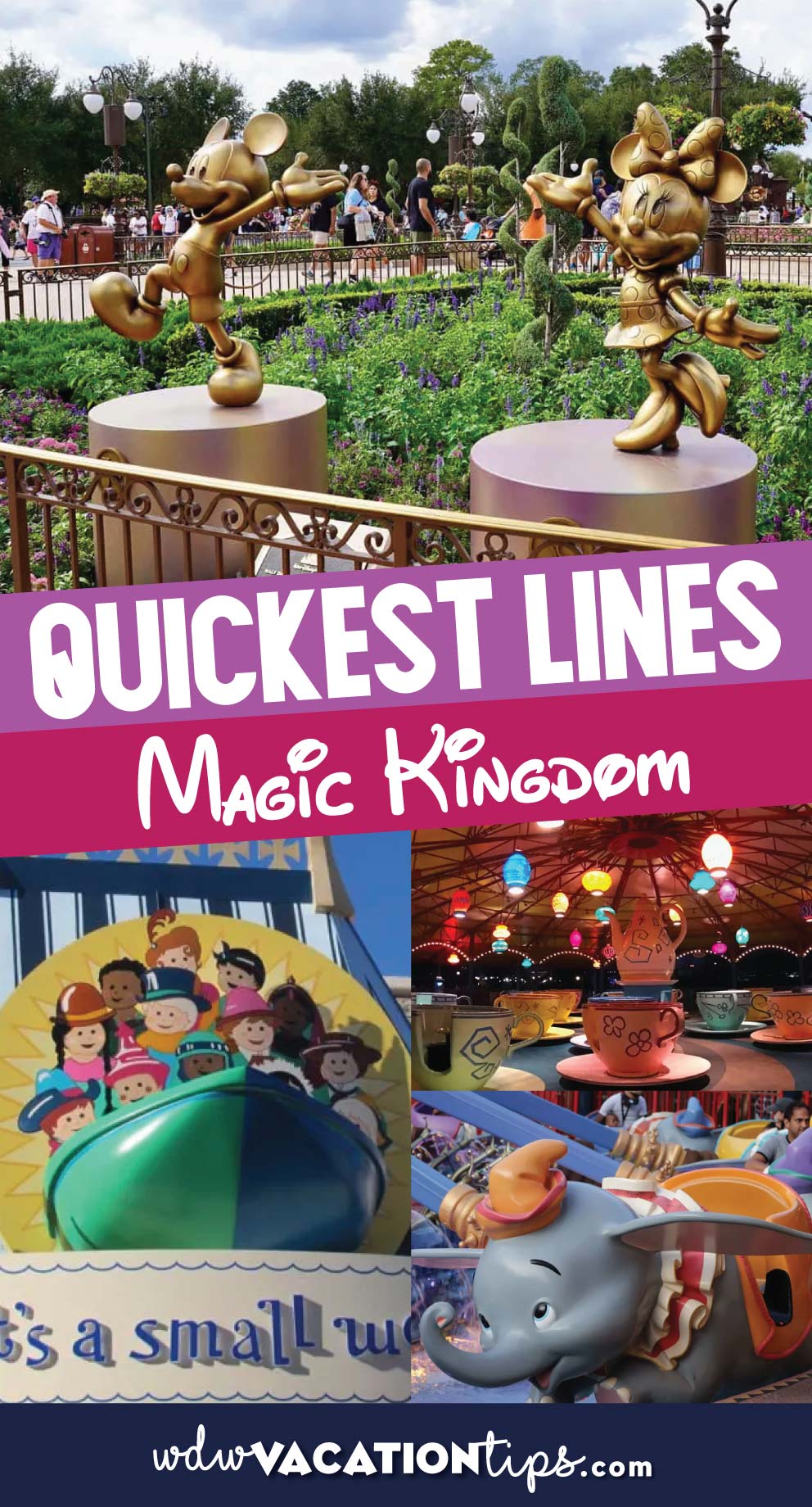 I think we can all agree that the worst part of a Walt Disney World vacation is standing in line outside in the humid Florida heat. While some of the more popular rides like Haunted Mansion and Jungle Cruise can have a nominal wait now and then, the average guest should expect to spend at least 30 – 60 minutes for most of the rides in Magic Kingdom.

But, the key word in that sentence is MOST. You may be surprised to learn that there are actually a number of Magic Kingdom rides that have little to no wait time, regardless of the time of year you visit. Here are the rides with the quickest lines at Magic Kingdom:

Walt Disney’s Carousel of Progress is a classic that opened up at Magic Kingdom back in 1975. It’s not only one of the oldest attractions at Walt Disney World but it holds the record of being the longest-running stage show in the United States.

The Carousel of Progress is not a ride per se, though it does move through each scene as John takes you, Rover (and his family) through four generations of innovations and inventions from gas lamps to the invention of electricity and beyond.

This attraction is located in Tomorrowland, next to Buzz Lightyear Space Ranger Spin. One ride and you’ll be singing “It’s a great big beautiful tomorrow for the rest of the day.”

Staying inside Tomorrowland, the Tomorrowland Transit Authority PeopleMover is just a hop and a skip away from the Carousel of Progress, and if you’re like me, it’s the next ride you go on as soon as your journey into the 20th century is over.

The PeopleMover takes guests around Tomorrowland, including inside Buzz Lightyear Space Ranger Spin and Space Mountain in a relaxing, 10-minute ride that gives guests beautiful views of Cinderella Castle.

Personally, I’ve only ever really experienced a 15-minute wait time during the rush of the holiday season, and even then the line moves pretty quickly because it’s never really stopping to pick up passengers.

3. Under the Sea: Journey of the Little Mermaid

The rides in Fantasyland usually have longer wait times than other rides in the parks because they’re the ones that are most suitable for young children, so it allows more families to ride together than let’s say Splash Mountain where they may have to break up.

Under the Sea: Journey of the Little Mermaid takes you and your thingamabobs under the sea as you listen to Scuttle describe Ariel’s journey from being under the sea to marrying Prince Eric. During your clamshell ride, you’ll encounter your favorite songs from the film and come face-to-face with an imposing Ursula all while you watch Ariel fight for her happy ending.

You’ll find this ride in New Fantasyland near Gaston’s Tavern. While the average wait time is around 20 minutes, you’ll have little to no wait the earlier or later in the day you get in line.

Mad Tea Party is tucked between Tomorrowland and Fantasyland. Guests can board their very own teacup as they spin and spin to music. And, if you want to make your teacup spin even more, go ahead and just make it so.

The average wait time is usually no more than 10 minutes and it’s a great way to start your day in Fantasyland.

Did you know that Walt Disney was a huge fan of carousels? So, it’s not totally surprising that Walt wanted a Disney version of it in the early days of the Florida Project. Interestingly enough, this carousel was actually constructed in Maplewood, New Jersey in the early 1900s.

This is the quintessential Disney ride because of its history, so it’s recommended that you don’t overlook this ride next time you’re walking through Fantasyland. It really does live up to its name: charming.

P.S. – Don’t forget to look for the horse that has a gold ribbon around its tail. While never confirmed, this is supposed to be Cinderella’s horse.

Or, more specifically, the boats to get to Tom Sawyer Island.

Located in Frontierland, guests will step off their boat and straight into a Mark Twain story. Guests will come across mills, bridges, forts, and even caves on this self-guided tour.

This attraction has decreased in popularity over the years, so it’s rare to have a wait time longer than 15 minutes. If you’re looking to do something a little slower-paced during your day at Magic Kingdom, this shaded area can be very relaxing.

7. Dumbo the Flying Elephant and the Magic Carpets of Aladdin

Is it really worth giving these two rides a different entry, considering they’re exactly the same minus a few major details like one’s an elephant and the other a magic carpet? The average wait time is around 20 minutes, which may still be surprising to some guests considering how quick and simple these rides are.

However, that’s part of the charm. They’re great for young kids and because they’re classics, people are always going to want to ride them. I’ve rarely seen this wait be less than 20 minutes, except during the fireworks. Even early in the morning, the queue line can fill up fast.

Though it’s right there in the open, smack dab in the middle of Liberty Square, you’d be surprised by how many people walk right by it en route to the Haunted Mansion or Fantasyland. However, if you have the time to ride it, do so.

This charming 17-minute boat ride takes you around Tom Sawyer Island and gives you rare glimpses of the Magic Kingdom that can only be seen on this attraction. You’ll even get some pretty unique views of Haunted Mansion and Big Thunder Mountain Railroad, too!

Do you know that large, planet-looking thing in Tomorrowland? That’s a ride called Astro Orbiter and unless you’re afraid of heights, it’s surprisingly a popular ride in Tomorrowland. The ride mechanics of this are pretty much the same as Dumbo the Flying Elephant and The Magic Carpets of Aladdin, but the reason why it’s not ranked with them is that it has a higher average wait time, is faster, and it takes guests much, much higher than the other two attractions.

But, since you’re incredibly high up (you need to take an elevator to board this ride), you’ll get beautiful views of Tomorrowland and Magic Kingdom. Personally, I recommend riding it at night because you’ll be too focused on all the glittering lights to think about how scary it is.

Like the PeopleMover and Haunted Mansion, “it’s a small world” is pretty much constantly boarding people. Though it has to stop to transfer guests back and forth from the dock, it takes on so many guests at the same time that the line moves really quickly even during peak periods.

You will occasionally see the line for “it’s a small world” creep up to 40-50 minutes, but if you see that, just circle back later because it will drop back to its average wait time multiple times throughout the day.

How to Avoid Long Lines at Magic Kingdom

There are a few ways you can avoid the long lines at Magic Kingdom:

Though it’s getting increasingly harder to find downtime at Magic Kingdom, it is possible. January, as soon as the kids go back to school, and February, before Spring Break, are usually less crowded than other times of the year. Mid-September and early October are always good months to visit because not only is the weather a little bit better, but many families are waiting until the holiday season to visit.

2. Stay at a Disney Resort to Get Early Access

If you’re staying at a Walt Disney World resort hotel, you’ll have access to Early Theme Park Entry. This allows you into Magic Kingdom (and any of the other parks) 30 minutes before off-property guests.

This can give you enough time to get in line for the more popular rides that tend to have a long wait time in the parks, freeing you up to experience everything else while other guests flock to the rides you’ve already tackled for the day.

Guests will make their selections at 7:00 am on the morning of their Magic Kingdom day (as well as every day they visit a Disney World theme park). This service replaced the FastPass reservation system and now costs $15 per person, per day.

Do you have any line hacks you use at Disney? Feel free to share them below and don’t forget to follow WDW Vacation Tips on Instagram.