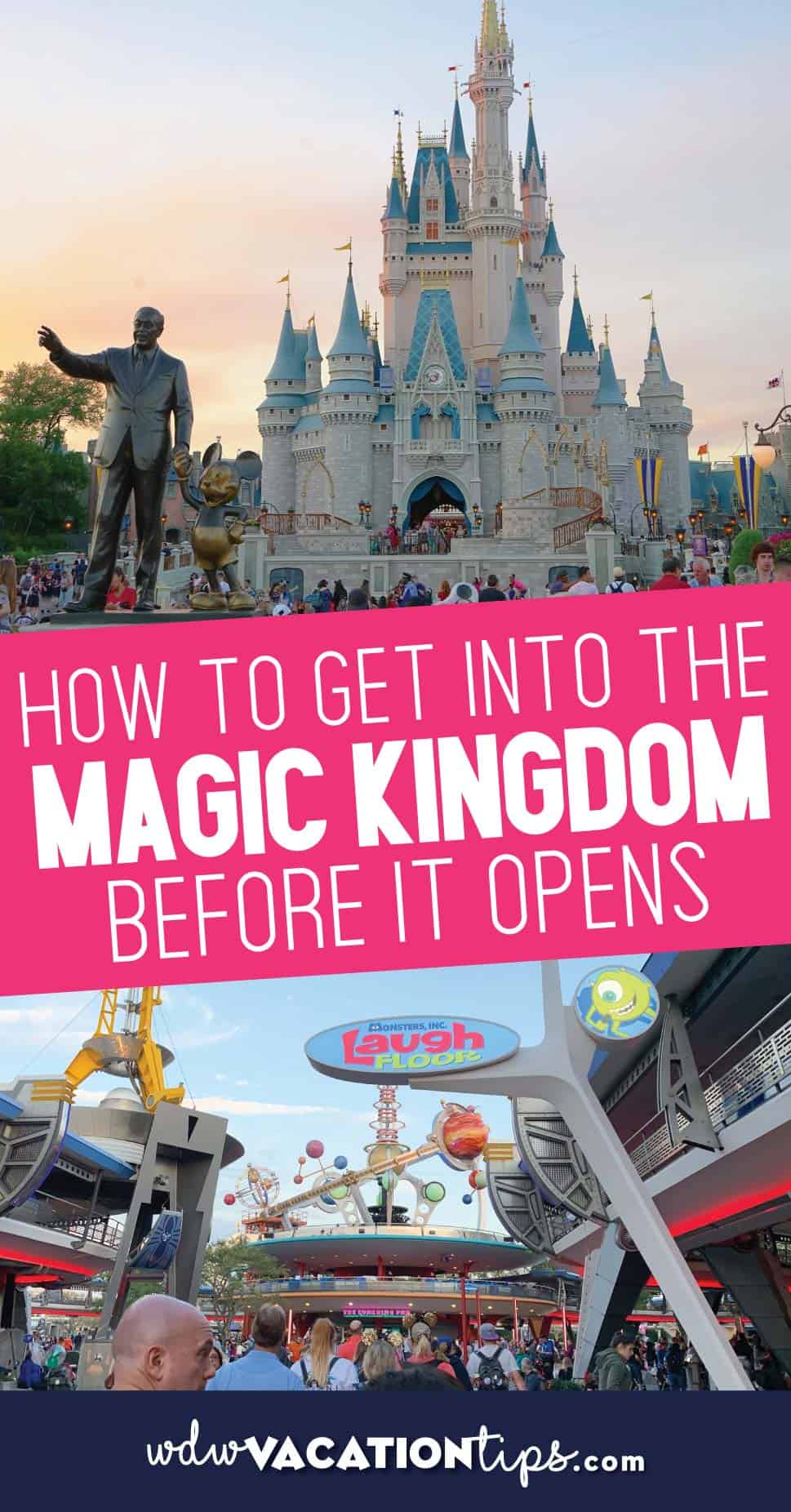 Walt Disney World is an amazing place. It covers 43 square miles of land, and a lot of the development is on the south end of that. The Magic Kingdom stands alone to the north at the end of World Drive. A massive parking lot at the Ticket and Transportation Center is the starting point for many guests who are visiting the Magic Kingdom for the day. For many of them, the Magic Kingdom is Walt Disney World. Ferries and monorails take them to the destination on the other side of the Seven Seas Lagoon where thousands of happy memories are about to be made. They may have arrived early in the day to make rope drop, but most of them have no idea about the Magic Kingdom’s early entry.

If they did, they would have made sure to arrive earlier, because you can get into the Magic Kingdom before the park opens. Not only is it possible to get in early at the Most Magical Place on Earth, but there are also quite a few simple ways to do it. Gaining early access to the Magic Kingdom is a huge advantage in your day. You can have breakfast and go on some key attractions before there are enough crowds to form considerable lines. With Magic Kingdom’s early entry, you have a foothold that will keep you in the lead throughout your day. It can help you leverage your Fastpasses, and also impact how you do mealtimes while you are in the park.

Gaining early access to the Magic Kingdom is not something you can just show up for. Like so many other things at Walt Disney World, you have to plan it in advance. There are several ways that you can do this. The most straightforward way is through Extra Magic Hours. This is a benefit only afforded to guests staying at a Walt Disney World resort. The next way to gain early entry into the Magic Kingdom is through Early Morning Magic. EMM differs from EMH because it is far more exclusive and includes breakfast. Both EMH and EMM are subject to specific dates, but the third foolproof way to gain early entry to the Magic Kingdom is to book a dining reservation for breakfast and schedule it for before the park opens. Yes! You can do that!

Below is a quick breakdown of each of the three ways to get into the Magic Kingdom before it opens.

The most common way to get into the Magic Kingdom outside of its normal operating hours is Extra Magic Hours. This exclusive benefit is a chosen time slot either before opening or after closing, where guests of the Walt Disney World resort hotels are allowed park access. Each of the Walt Disney World parks has EMH, and they often have a rotating schedule. However, for the Magic Kingdom, morning Extra Magic Hours are available daily.

Extra Magic Hours are literally one hour. Since the Magic Kingdom opens at 9:00 am daily, qualifying guests are admitted into the park at 8:00 am. To take full advantage of this benefit, you should arrive at the gate at 7:30. You have the greatest advantage if you stay in a Magic Kingdom resort area hotel. The Contemporary, Grand Floridian, Polynesian Village, and Shades of Green all have the fastest access. The Contemporary is only a five-minute walk from the gate.

The more exclusive way to get into the Magic Kingdom before the park even opens is by buying a ticket for Early Morning Magic. The downside with this method is that it is subject to select dates and is not always available. When dates are announced for Early Morning Magic, you can buy your ticket on the official Walt Disney World website.

Finally, you can make your dining reservations so that the arrival time is well before the park’s scheduled hours. You can dine in the Plaza restaurant before the park even opens, then head across the park to Frontierland where there is a higher concentration of E-ticket rides to go on before the morning crowds pick up. Other restaurants where you can get a head start with an early breakfast reservation are the Crystal Palace, Cinderella’s Royal Table, and Be Our Guest in Fantasyland.

The Crystal Palace is an all-you-care-to-enjoy buffet, so you can come and go at your own pace, and you can load up on food that will last you long into the afternoon. Be our Guest is a fast-casual restaurant. However, they do take reservations. They open at 7:30, so you can have a quick meal and be on your way ahead of even the EMH park guests. Cinderella’s Royal Table opens at 7:00. This dining experience is more formal, but the extra half-hour helps you stay ahead of the crowds, plus you’ll have an incredible breakfast with Disney princesses.