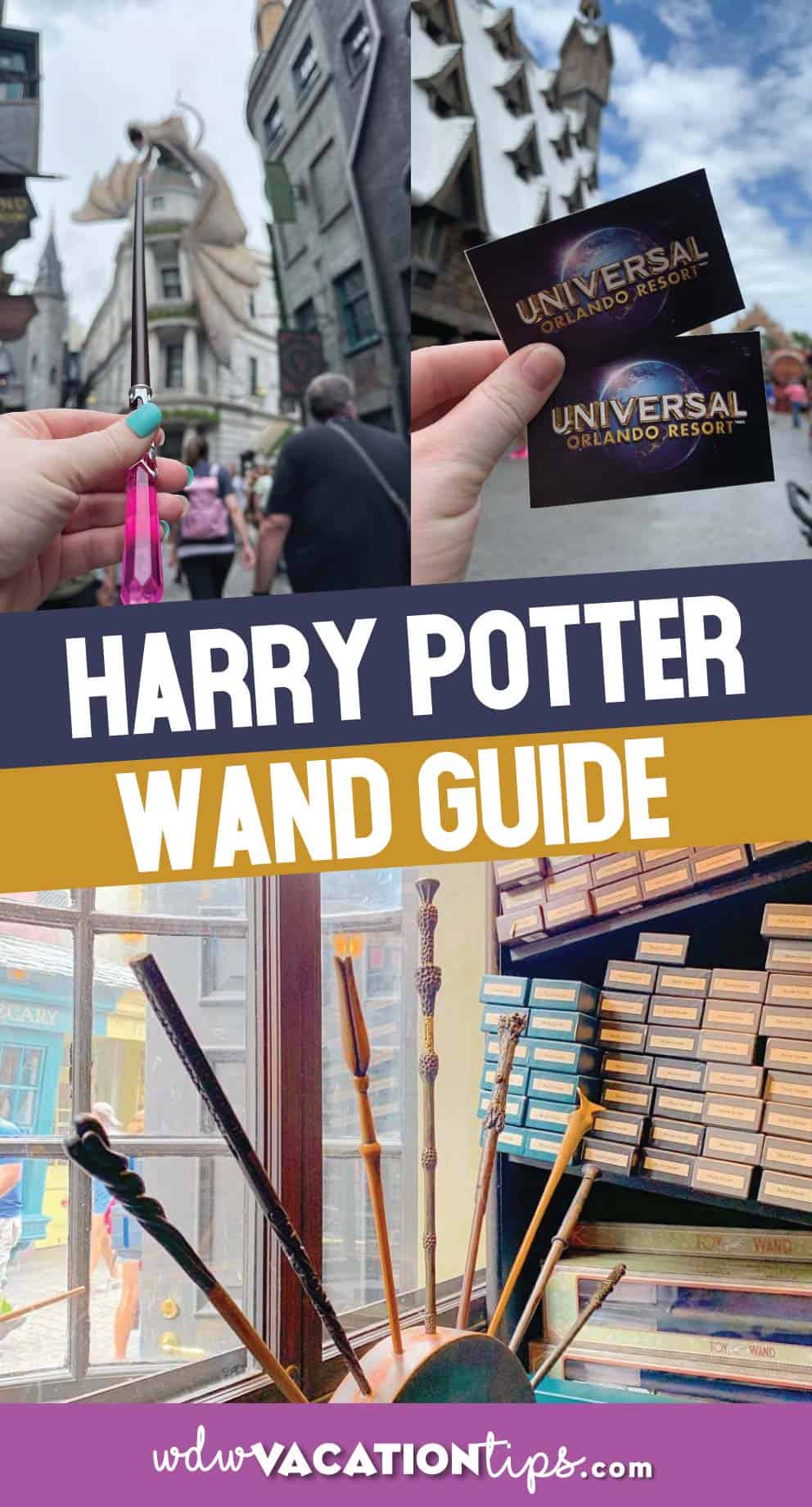 Even if you haven’t received your letter to attend Hogwarts School of Witchcraft and Wizardry (yet), you can still feel like you’re a part of the book and film series by visiting the Wizarding World of Harry Potter at Universal Studios in Orlando, Florida. While there are many things you can do to make you feel like a wizard (such as drinking Butterbeer and taking a ride on the Hogwarts Express), one thing stands out above the rest: buying a wand! And as luck (or magic) would have it, we just so happen to have the complete guide to Harry Potter wands at Universal Orlando:

Wands to the ready!

Where to Buy Harry Potter Wands at Universal

Just like in the book and film, you’ll be able to purchase your first wand at Ollivanders Wand Shop in Diagon Alley. Guests will find a large selection of wands (all of which have been handcrafted since 382 BC, by the way) at this famous wizarding shop. There are two Ollivanders Wand Shops in Universal Orlando – one on the Universal side and the other on the Islands of Adventure side. This is because guests who only purchase a ticket for one park and not the other, will not be able to experience the other side – i.e. guests of Islands of Adventure will only be able to access Hogsmeade and everything that side of the park has to offer.

Guests who enter the theme park on the Universal Studios side (and not Islands of Adventure) will be able to access Diagon Alley by walking back and to the right. Look out for the Knight Bus, which is across the way from the entrance to Diagon Alley.

Guests may also be able to purchase a wand at select carts scattered throughout the parks, however, the selection won’t be as big as it would be in the shop themselves. Though I have to admit these days with them trying to space out guests as much as possible most things appear on the carts. The same applies to the gift shops on property in the CityWalk section.

How Does Getting a Wand at Ollivanders Work?

Once inside Ollivanders Wand Shop, one of the wizards working at the shop will select members of your group to have a wand “pick them.” This interactive experience allows guests to “try out” different wands until the right one selects them. This process usually involves 1-2 wands per person.

How Much Do Harry Potter Wands Cost?

Wands at Harry Potter World in Universal Orlando cost between $55 for standard wands and $59 for interactive ones. Guests also have the option of purchasing the Interactive Collector’s Edition Wand for $75. This is a price increase from previous years, so only time will tell if 2022 will see another uptick. Most wands range in sizes between 14-16” and are sculpted from resin and hand-painted.

What’s the Difference Between Standard and Interactive Wands at Universal?

Note: at the end of 2021 Universal discontinued the sale of standard wizarding wands.

There are currently 38 different types of interactive Harry Potter wands that can be used at the parks. These include:

In addition to these wands, guests can also purchase a wand stand to go with them to put them out on display for an additional $35 (plus tax).

A lot of parents will be asking this question, and the good news is that they have a pretty long shelf life. Since these wands are only interactive at the parks, they don’t have a battery that will drain the moment you return home.

In fact, if you return to Hogwarts at another time and discover that your wand isn’t working, the wand shop at Universal Orlando will be able to help you repair it.

How to Cast Spells at Harry Potter World Orlando

Once you purchase your interactive wand, be prepared to use it all over the Wizarding World. There are a ton of locations to cast spells, including:

How to Cast Spells

To cast a spell, all you have to do is look down at the pavement at your desired location and find a medallion. All the interactive “spell spots” will be marked with these, so you know where to stand when it comes time to cast your spell. Furthermore, these medallions will let you know which way to point your wand and what spell you need to cast. However, keep in mind that you don’t have to say these spells perfectly; in fact, since they’re all sensor-based, they’re not necessarily required, so saying them is completely up to you and your party. Silent spells are just as magical! Plus, they’re only reserved for the most talented wizards, after all.

The sensors at these locations are rather small, so it’s recommended that you limit your movement when casting a spell. Try to only use your wrist when you flick your wand.

If you need help casting a spell, most locations have an employee standing by to assist you with proper gestures. If a spell location isn’t working, an “anti-jinx sign” will be placed in the window, or a team member may be standing by to let you know that spells at this location are down.

How to Get Chosen for the Interactive Wand Experience

As with every kind of guest-involved interactive experience, it’s not a guarantee that you’ll be chosen. However, there are a few tips for getting chosen to partake in the wand-selection process. In most cases, guests who are wearing Harry Potter gear such as wizarding robes tend to get selected at a higher rate – especially if they’re wearing Gryffindor colors.

Furthermore, if you enter Ollivanders with a wand in hand, you will probably not be selected as they want to provide this unique experience for those who haven’t already purchased a wand. If you have a wand but never experienced the interactive experience, put your wand in your bag so it’s out of sight to increase your chances.

Also, keep in mind that children will most often be selected to participate in the show. It doesn’t mean that adults young at heart can’t be chosen, just know that your chances might be slim if a child is in the group. Another good rule of thumb for getting picked for this experience is to look excited and stand near the front of the group.

Did you buy a Harry Potter wand on your last visit to Universal Orlando? If so, let us know which type you got, and don’t forget to follow us on Instagram for all the latest Universal Orlando news, tips, and tricks.