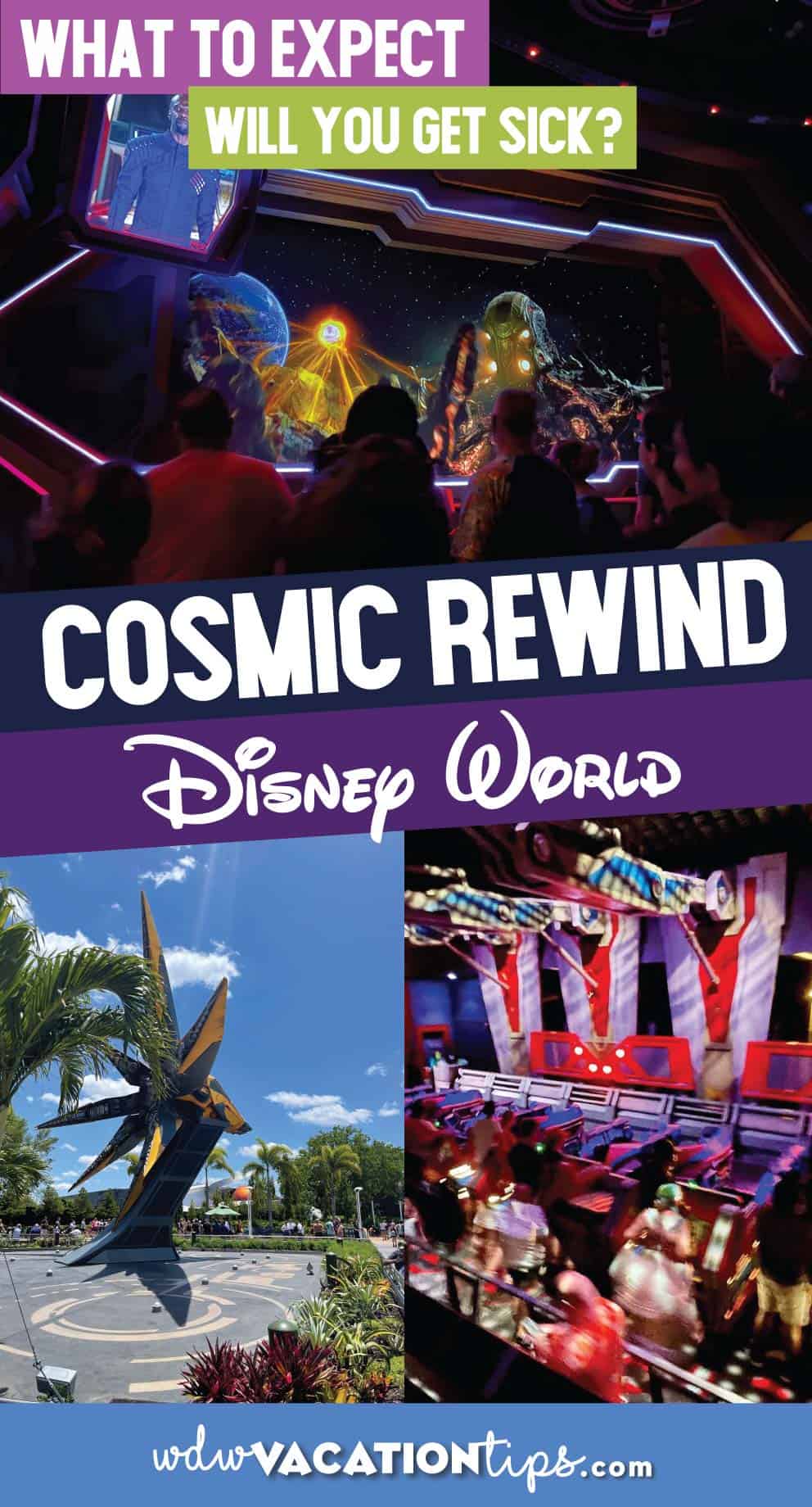 Warning: ride spoilers are ahead!

Your adventure starts by touring the Galaxarium! This is a planetarium-like exhibition showcasing the similarities and differences between Xandar and Earth’s galaxies. You’ll even get to discover some of the incredible wonders of Xandar and learn about their technology.

Just as you are about to reach the culmination of the tour, everything goes sideways, and you are called into action to help the Guardians of the Galaxy. Join Rocket, Groot, Gamora, and Star-Lord on an urgent mission where you’ll rewind, rotate, and head towards the action through an exciting space pursuit.

The Guardians are asking for our help to stop Eson, the Celestial seen in the image above, from completing what I’m going to assume is a nefarious plan. I mean … look at that guy! Eson is huge. And powerful. And ancient. And seems poised to grab our pretty blue planet in one hand and slam dunk us like a basketball!

Before you enter Cosmic Rewind be sure to check out the full-sized 51-foot Nova Core ship. This is the ship from the end of the first movie where they were able to all unite and save the galaxy. Hmmm… this may be a bit of foreshadowing for what adventures lie ahead.

Queue for Guardians of the Galaxy Cosmic Rewind

On our visit we first had to wait in the blazing outdoor sun, I would come prepared with a portable fan or umbrella if you are going to wait for this ride in standby. Disney did announce that Cosmic Rewind will open with no standby queue. To start there will only be a virtual queue (free) and the paid Lightning Lane option.

Once you enter the indoor portion of the queue this is the first room you will be greeted with the Galaxarium. This first area is a sweeping planetarium-style space showcasing planets, stars, and other intergalactic wonders that connect Terra and Xandar. Just tying in the fact we are all born of the same space dust. The Xandarian supercomputer, Worldmind, provides narration in the Galaxarium and gives context to the stunning visuals.

Each time in the Galaxarium we got a different snippet as Worldmind shared different facts with us. It was especially funny to listen to what she learned from Peter Quill.

Once you leave the Galaxarium it’s on to the Xandar Gallery. This is the area where you can learn more about the Xandarian people, culture, and history, including the heroes of Xandar! Don’t skip by these specially crafted displays including models of starships and a Xandarian city. There is a fun Easter egg in this area that shows Walt Disney himself presenting a plan for Epcot.

The gallery also features excerpts from “Good Morning Xandar,” where a host interviews the Guardians of the Galaxy about their heroic deeds. One of my favorite clips from this part of the line is when they are interviewing Peter Quill about his childhood trip to Epcot. I wonder who is going to tell him about Kitchen Kaberet.

This last area, the Phase Chamber, is where things start to heat up. Here you will instantly teleport from EPCOT to a Nova Corps Starcharter cruiser orbiting Earth. Learn about the Cosmic Generator, a piece of Xandarian technology that creates jump points. A jump point is an artificial tunnel in space allowing for rapid travel across vast distances. You also are going to stumble into your villain looking to rewrite time.

Ride Vehicles for Guardians of the Galaxy Cosmic Rewind

The roller coaster vehicles are officially called Starjumper vehicles and most uniquely spin a full 360 degrees! Each section or car holds 4 people sitting two by two.

You just have a lap bar for this attraction but that’s not to say you are not held in tight. With all the motion of this ride as you fly quickly through space the seats in combo with the bar hold you in tight.

There is a small pocket for each person to place items. This is perfect for those sunglasses or ears since I do not recommend wearing anything on your head during this ride. Have a large bag or backpack? No worries! You are simply told to place it at your feet. During all our trips on Cosmic Rewind, all our belongings stayed safely in the car and surprisingly didn’t get jostled around on our rides.

Video of a Ride on Guardians of the Galaxy Cosmic Rewind

Here is a look at the ride portion of Cosmic Rewind! This was when we got the song September.

Since every time you ride you have no idea what song you get, it adds an element of surprise. Here is a look at the ride with the song, “I ran”.

Will Guardians of the Galaxy Cosmic Rewind Make Me Motion Sick?

Well it depends. When we rode no one in our party got motion sick. However we have heard reports from other who have. With the steep intensity of the ride I could see it happening. The ground was defiently moving when I left my ride vechile but I don’t feel sick.

If you are prone to motion sickness I highly recommend sitting in the middle or middle front of the car. This is because I found two tricks that helped me when I was not feeling the ride. First is close your eyes being in the dark not being able to see much of the track makes everything feel more intesne than it really is. Second tips stare at the cars in front of you and don’t try to focus on the screens you are flying by.

If you do find yourself as someone prone to motion sickness I would say to come prepared. I showed up with my ReliefBand, similar to Sea Bands but I find works so much better. You could also bring Dramamine, a ginger oil or other similar anti-nausea medication.

How Intense is Guardians of the Galaxy Cosmic Rewind

Disney labels this as a family coaster and I think that label is a bit of a stretch, Seven Dwarf Mine Train in Magic Kingdom is for sure a family friendly coaster. Guardians of the Galaxy is definitely up there in the intense ride category.

The intensity of this ride comes from its speed and tight turns. There are no major drops, upside-down flips, or corkscrews. There is no over-the-shoulder harness, just a lap bar, we promise you won’t be going upside down on this ride.

As for spinning. There is no teacup like spinning on Cosmic Rewind. So while the cars can spin 360 degrees you never actual do a full spin it only turns you from side to side as you move down the track.

What Ride is Guardians of the Galaxy Cosmic Rewind Most Similar To?

When trying to figure out how intense this ride people are often looking at other Disney attractions to compare it to. While this ride is so intense and has this unique floating sensation we will do our best.

As far as comparable coasters at Disney there aren’t any true ones. I think it’s most like Escape from Gringotts at Universal Studios. It is on a roller coaster track the cars can rotate as they move along and there are screens. While the screens on Cosmic Rewind aren’t necessary to the story like the ones on Gringotts plus there is no 3D on Cosmic Rewind. While Gringotts I find makes me a little nauseous, Cosmic Rewind did not.

When we rank it against other Disney coasters it’s definitely an amped-up Space Moutain. I will say it just lacks a lot of the drop you get on Space Mountain but is way faster and smoother. I would still rank Expedition Everest and Rock and Roller Coaster as more intense than Cosmic Rewind. Though the speed and smoothness are similar to Expedition Everest.

The Songs and Tracklist for Guardians of the Galaxy Cosmic Rewind

When Disney Imagineers were developing this family-thrill coaster, they came up with a list of more than 100 potential songs for the Starjumpers’ onboard sound system. The team rode the attraction over and over again (it’s a tough job, but somebody’s gotta do it) testing how various tracks fit with the spirit and the movement of the coaster. They finally settled on this “Awesome Mix” of six songs, in their classic versions:

My favorite part is that you won’t know which track you’ll hear each time you ride until you actually blast off with the Guardians on an intergalactic chase through time and space. This means you will have to ride again and again to hear them all!

With any new ride addition to Disney World comes a lot a questions. So lets dig into the common ones we were asked on our social media pages!

Does cosmic rewind have drops?

Yes, there are slight dips in the ride but no major drops. The coaster is very smooth and you don’t get any dropping senstation, stomach in throat, from Cosmic Rewind.

What kind of ride is Cosmic Rewind?

Does Cosmic Rewind go upside down?

No. This coaster doesn’t go upside down.

What park has Guardians of the Galaxy ride?

Epcot at Walt Disney World. You can find it in the front of the park in the old location of Universe of Energy.

Height Requirement for Guardians of the Gaxaly Cosmic Rewind?

There is a 42-inch height requirement.

Is there Cosmic Rewind on Ride Photo?

Yes! There is a photo taken during the ride.

We all love knowing about those special nuggets inside any Disney attraction. Here are just a few for Guardians of the Galaxy Cosmic Rewind.

Of course, every good attraction features its own gift shop! Here you can find Guardians of the Galaxy-themed fashions, accessories, home décor, collectibles and toys at the Treasures of Xandar shop, located at the Wonders of Xandar pavilion. The Xandarians hired The Broker to operate this new merchandise location on Terra, which debuts several new product lines!

Conclusion on Guardians of the Galaxy Cosmic Rewind

This new Disney World coaster stole my heart. What I hate about large coasters, big drops. Sorry, just not a fan of that stomach drop feeling. Guardians of the Galaxy Cosmic Rewind is still fun and intense thrill ride without my least favorite thing! So this is why it’s such a win in my book.

When talking to others who have ridden they love it for its unique sesation it gives you when riding. It really does make you feel like you are floating in space. I think it’s more a flying ship on a race feeling but I get it! Overall tons of fun and I recommend trying this attraction at least once and making your own judgment call. 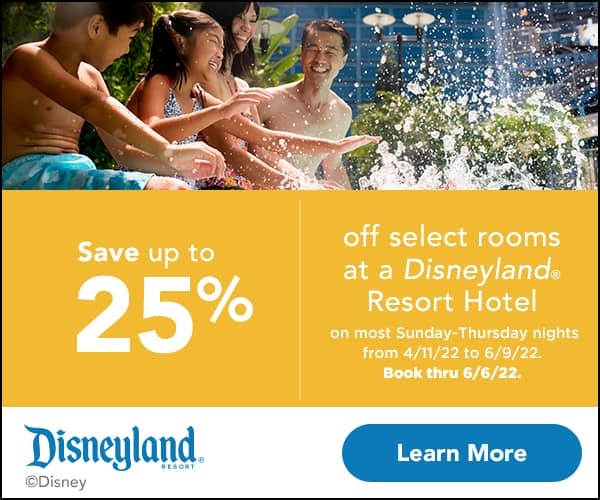