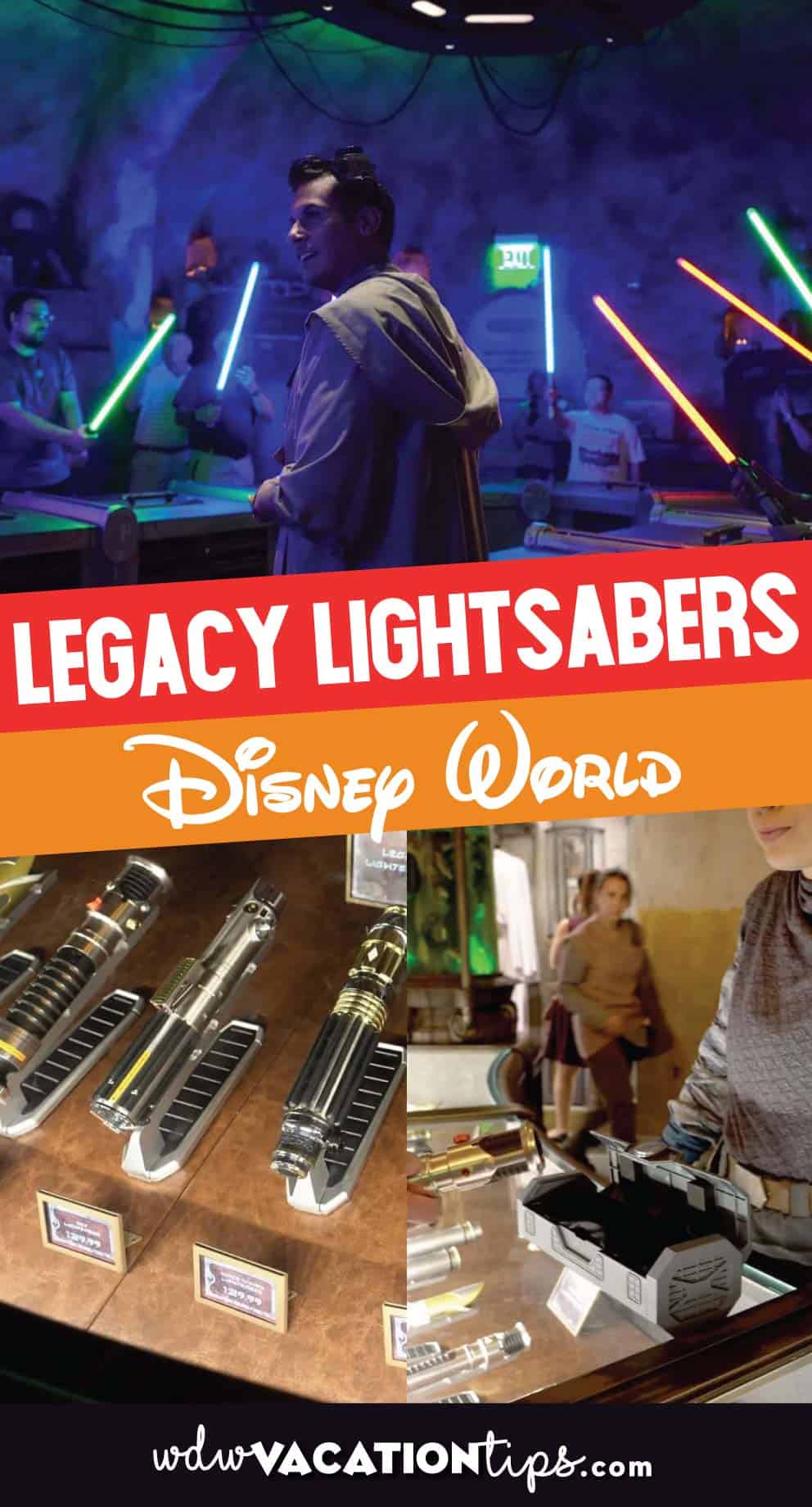 We can all agree that stepping inside Galaxy’s Edge at Disney’s Hollywood Studios is like stepping inside the set of the Star Wars films. Star Wars’ legacy is the fact that it’s still relevant today, more than 40 years after the original trilogy came out. Whether you’re a new fan or an original from back in the day, you can join the rebel forces with your own legacy lightsaber from Galaxy’s Edge.

What Are Legacy Lightsabers?

Legacy Lightsabers are intricate replicas of the lightsabers of popular characters in the Star Wars franchise such as Luke Skywalker and Darth Vader used in the films.

These are relatively expensive souvenirs and can cost anywhere from $139.99 – $400.00 depending on the style you choose. This is excluding the blade (the light-up part), which will cost you another $45 to $50 depending on whether you want a 26” blade or a 36” one.

Where You Can Buy Legacy Lightsabers

The line here gets very long and almost always is wrapping outside the store into the hot Florida sun. If you can I recommend waiting until the very end of the day right before closing when this store’s line ia at its shortest.

While Disney originally announced that all the merchandise in Galaxy’s Edge would be contained in that area, guests were briefly able to buy them at the Star Wars Trading Post at Disney Springs. This was a special offering they did during the beginning of reopening post-pandemic.

While it disappeared for a while, now in September of 2022, Disney Springs is once again carrying select legacy lightsabers. When we were there they had most of the lightsabers most noticeably missing were the newer styles like Cal Kestis and Plo Koon.

In early 2022, Keystone Clothiers on the corner of Hollywood Boulevard has been carrying the Legacy Lightsaber collectible set. These sets replace some of the retired hilts and now come with a hilt, blade, and belt clip. These sets do not come in a plastic box like the hilts, but the cardboard box sets are shaped in the same manner.

If you’re in the market for a Legacy Lightsaber, the good news is that you have a lot of great options to choose from that are perfect for fans of any trilogy or story. Lightsabers are available for the following characters. Keep in mind that prices are always subject to change, however, this is what they’re currently selling for (without the blade).

Note: Stock Status is for Hollywood Studios at Walt Disney World. Updated 9/7/2022. Stock status may change at any time and is not guaranteed.

Ahsoka Tano Clone Wars lightsabers are special, as hers are the first ones that can change colors, switching between green and blue. Darth Maul’s Shadow and Asajj Ventress Refocused hilts are identical except for the visible Kyber crystal inside are different colors making the blade color different as well when activated.

Some hilts come with adaptors that replace the end caps allowing you to attach two hilts together to make a double-bladed lightsaber. Darth Maul, Temple Guard, Asajj Ventress, and Cal Kestis hilts can be can all be combined using the provided adaptors with the hilts. Maul Shadow and Asajj Ventress Refocused can only be combined with the Darth Maul’s original hilt as that is the combination Maul used in the Clone Wars TV show.

Guests can purchase the following add-ons:

A detailed recreation of the Reforged Skywalker Lightsaber hilt from Star Wars: Galaxy’s Edge at Walt Disney World and Disneyland activates sound effects and illuminates in blue when you attach a Lightsaber Blades.

This is the Lightsaber of the most powerful Jedi Master in the Universe, Luke Skywalker.  Features green lights and sound effects when used with a Galaxy’s Edge lightsaber blade.

There is only one place where you can buy the Legacy Lightsaber for the Star Wars Galactic Starcruiser. It’s inside the shop onboard the Halcyon, the shop is called The Chandrila Collection. A special feature of these lightsaber hilts is that it is customizable. You can choose to customize your hilt via attachable letter icons written in Aurebesh. With every starcruiser lightsaber, you get one of each letter of the entire Aurebesh alphabet.

This was the personal lightsaber of Darth Vader, a Sith Lord who served as Darth Sidious’ last apprentice and was head of the Galactic Empire’s military. Features red lights and sound effects when used with a Galaxy’s Edge lightsaber blade.

What if I Want a Custom Lightsaber Instead?

If you’re interested in buying a lightsaber, but maybe a Disney Legacy Lightsaber isn’t for you, then we recommend hopping over to Savi’s Workshop. This workshop experience allows guests to make their own lightsaber. Each guest will receive a box that contains:

Guests will choose which ones from the sets they want, as well as the color of their kyber crystal. Available colors include red, blue, violet, and green.

Advanced recommendations are required and payment is due upon check-in at the workshop. This lightsaber-building activity costs $219.99 plus tax per lightsaber.

What to Expect Inside Dok Ondar’s Den of Antiquities

Once inside, you’ll be contained to the first level, as the second level is usually reserved for special items that are kept away from the public. However, you can easily look up and take a look at what’s around. You’ll find blasters, taxidermy, helmets, and a ton of other treasures straight from Star Wars lure. While you may not be able to explore it, just being able to see these cool artifacts lends to the feeling that you’re truly in a galaxy, far, far, away.

Though Dok Ondar is an impressive animatronic, he doesn’t really interact with guests too much. But, even so, it doesn’t take away from the complete immersion you feel once you step inside.

Who is Dok Ondar Anyway?

You may be wondering who Dok Ondar is anyway. Unfortunately, not much about him has been explored in the Star Wars universe, however, his story has been briefly referenced in the film, Solo: A Star Wars Story, as well as the comic book series based on Galaxy’s Edge.

Sometimes, Legacy Lightsabers are available online at shopDisney. We’ve seen Legacy Lightsabers from Luke Skywalker, Darth Vader, and Obi-Wan Kenobi all make an appearance online for the same price they are inside the parks. However, it’s a hit or miss when they’ll be available.

ShopDisney also sells these custom lightsabers for certain characters such as Rey and Mace Windu, however, these are only available in a set that comes with a display stand and belt clip. The Mace Windu set, for example, cost $219.99 and is limited to one item per guest.

Your best bet will actually be Amazon if you can’t get to Walt Disney World to buy them in person. The website is currently selling the Ahsoka Tano twin lightsaber set and carrying case for $328.00, as well as many others including Rey, Darth Maul, and Kylo Ren. While this is pricer, some retailers on Amazon allow you to use payment plans such as Affirm to make monthly payments, which may make swallowing this hefty price tag a bit easier.

Are Legacy Lightsabers Worth the Money?

That answer will be completely up to you. If you’re a major Star Wars fan or collector, this is an awesome piece to include in your collection. In our opinion, this is better reserved for adult fans and collectors, whereas the customized lightsabers at Savi’s Workshop give your kids an awesome experience and more bang for your buck, so to speak.

That being said though, if you or your child will love owning this, then go for it! The best Disney souvenirs to spend money on are the ones you’ll get the most use of. If you do end up purchasing a legacy lightsaber of your own be sure to read How to Get a Lightsaber Home From Disney.

Do you own any Legacy Lightsabers? If so, which ones? We’d love to know. Also, don’t forget to follow us on Instagram for all the latest Disney tips and tricks.

Which blade length would you recommend for the Kylo Ren Lightsaber?

I'm planning to buy the Darth Vader Legacy Lightsaber Hilt when I go to Disney World's Star Wars Galaxy's Edge this weekend. I've already obtained the 36 inch blade & the red kiber crystal; does the the hilt come with the lightsaber stand as well as the belt clip or are those sold separately as well?

The red kyber crystals only work in the custom lightsabers built in Savii’s Workshop. I’m not sure about the belt clip but the lightsaber stands are sold separately. There is a set that comes with the blade, belt clip, and stand with is different than the one available GE.

Really want to purchase a Legacy Luke Skywalker Light Saber! I am coming to Disney August 31st, 2022 and will be there for 5 days. My hope is Dok Ondar's will have one that comes with the case. I would also want to purchase the blade and have them send it to my home so I won't have it damaged on the plane going home!

It was just in stock this past weekend and it's been here for a bit so I think you will be in luck!

No official word yet on an exact release date.

when you build a light saber do you pick the materals or do they pick for you?

For building at Savi's you get to pick which set of materials you want. They have them broken up into categories. We have more on it here - https://www.wdwvacationtips.com/savis-workshop/