Disney World is one of the biggest places that people from all over the world flock to every year. It has been known for its iconic rides, culture, characters, and firework experiences. The number of people visiting Disney World each year is staggering. The Magic Kingdom alone averages almost 60,000 visitors daily while the other three parks each bring in around 30,000-40,000 a day. In order to accommodate all the visitors, it takes an army and a lot of space, food, and spirit. So let’s put some perspective on just how big Disney World is!

Since millions visit Disney World each year, more Disney Resorts have been built to accommodate that ever-growing number. There are over 30 Disney-owned Resorts throughout their property. There are six value hotels, five moderate hotels, 8 deluxe hotels, and 12 Deluxe Villas.

Currently, Disney World covers about 40 square miles. That is about the size of two Manhattans or the size of San Francisco. Most do not realize that the Magic Kingdom is not actually the biggest theme park. Totaling 403 acres, the Animal Kingdom is actually the company’s largest theme park. Although Disney takes a lot of pride in their fun and exciting experiences, they also have another passion. About 1/3 of their acres are covered by conservation land. Through water conservation, waste minimization, and preserving space for wildlife, Disney is doing its best to host all their guests in a sustainable way.

The Staff of Disney World 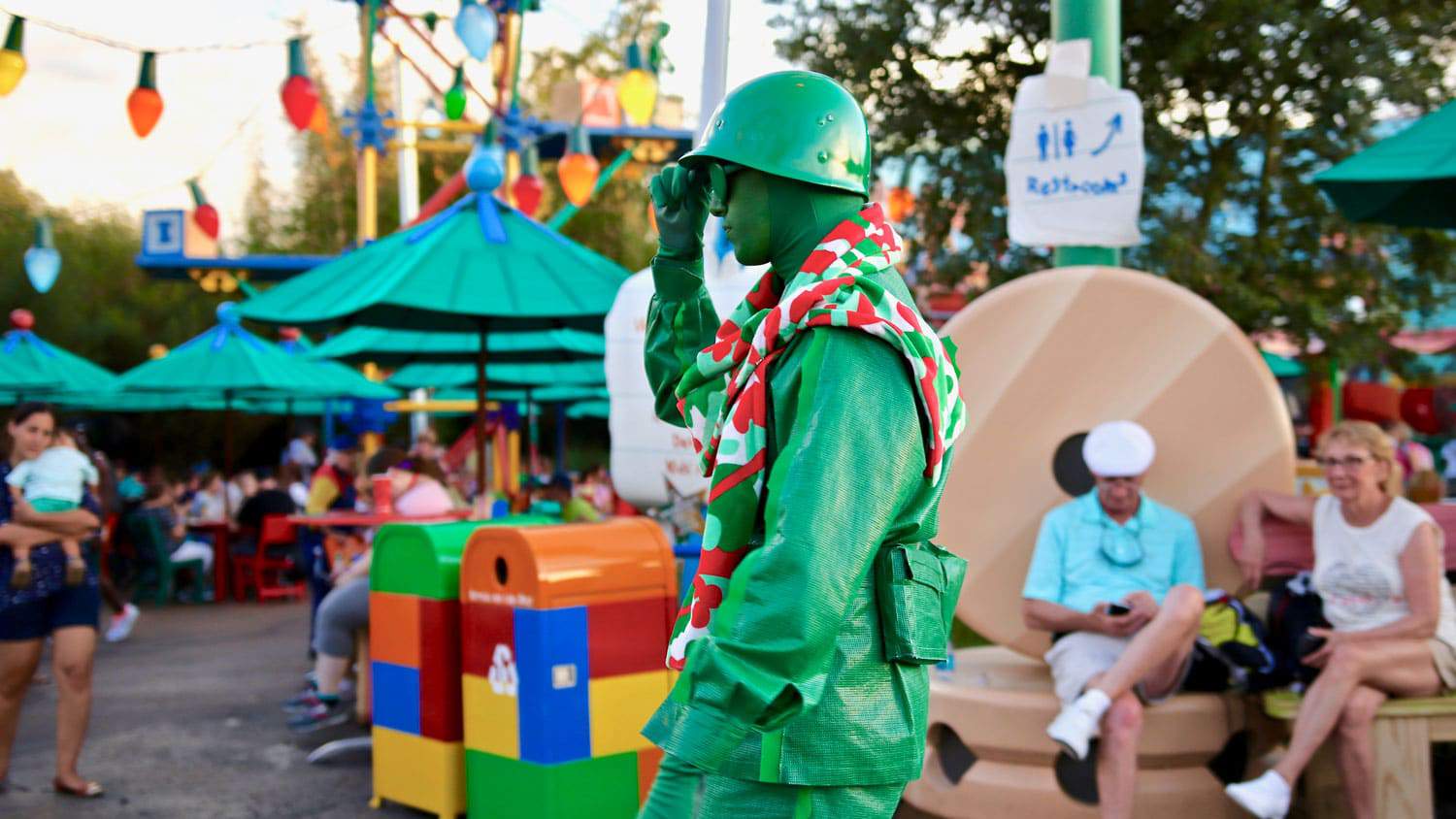 Cast members are a huge part of what makes Disney World run so smoothly. Disney chooses and trains some of the best crew in the world. Guests rave about how cast members go above and beyond to make their experiences memorable. Disney is the largest single-site employer in the United States with its more than 70,000 cast members.

Another fun fact about Disney World is the number of costumes the mouse himself has. Mickey Mouse has more than 136 different sets of clothes. Additionally, Minnie Mouse has a wardrobe of about 100 outfits. Disney does a great job really immersing guests in the complete experience, which is why they have designed outfits for characters that suit different themes such as theme park ambiance, holiday outfits, and parade attire. Nearly all characters have at least one different outfit change.

The Number of Lost Items at Disney World

Since guests want to spend all day at the theme parks, they come in with multiple backpacks and strollers. As a result, many objects are lost each day. One of the main items lost are sunglasses and prescription glasses. Each day over 200 pairs are turned over to the lost and found. It can take hours for visitors to go through the different bins full of glasses in hopes of finding theirs. Do yourself a favor and make sure to bring unique, colorful glasses so you can locate them quickly in case they are misplaced and brought to lost and found. Additionally, 6,000 cell phones, 3,500 digital cameras, 18,000 hats, and 7,500 autograph books turn up in lost and found.

One thing many guests do not think to do on vacation is to clean their dirty clothes. However, each Disney Resort has laundry services either in the rooms themselves or in a communal area. Additionally, each day cast members change multiple bed sheets and garments. About 285,000 pounds of laundry is done each day, and more than 30,000 items are dry-cleaned daily.

Another staple at Disney World may not be one you have thought of before. It is those juicy turkey legs. Nearly 2 million turkey legs (1.8 million pounds) are consumed by Disney guests each day/month/year. Disney World also offers more than 200 places to get food which includes about 90 full-service restaurants. Each restaurant offers delicious food. Guests consume over seven million hamburgers, a half-million pounds of mac and cheese, and two million pounds of ketchup.

EPCOT is the theme park that is known for its conservation efforts. It grows more than 30 tons of fruits and veggies each year at its Land Pavilion. These fruits are then used locally in the restaurants and cafes around the property. Additionally, Liberty Square in the Magic Kingdom is home to Liberty Oak, which has spawned over 500 oak trees thanks to the acorns the trees produce along the route.

Pictures are worth a thousand words and that is differently true for Disney World. Disney is one of the most photographed places in the world. Disney PhotoPass photographers can take between 100,000 and 200,000 photos of guests each day. The Magic Kingdom alone has visitors lined up on Main Street USA to just get a picture with the iconic Cinderella Castle. Imagine how many pictures aren’t accounted for that are taken just by guests themselves.

When at Disney, guests spend countless hours in the gift shops. One of the most iconic items they buy is Mouse Ears. These ears represent characters such as Mickey Mouse, Donald Duck, Chewbacca, and Peter Pan to name a few. The amount of Mouse Ears sold each year would stretch 175 miles. Additionally, autograph books are another key item purchased by guests. If you stacked the number of autograph books sold each year, the line would reach the top of Cinderella’s Castle 200 times. If you add on the specialty autography books, the line would reach 88 miles into space. Now that is a lot of autographs!

Cinderella Castle at the Magic Kingdom is 189 feet tall, which makes it 100 feet taller than Sleeping Beauty Castle. Although it is tall in size, designers created the castle to look larger than it really is. The bricks on the top layers are actually smaller than those on the bottom to give it the allusion of being giant. Another fun fact is that the castle is not actually made out of stones. Rather it is built out of fiberglass. Expedition Everest at Disney’s Animal Kingdom is actually larger than Cenedella’s Castle. It is estimated to be just under 200 feet tall, which makes it the tallest building in Disney World.

As you can see, Disney World is a fun, giant, and amazing place. It truly is a terrific location to visit and see for yourself just how massive it truly is. It’s true that it really is it’s own magical city due to its size and scale.