Just as with some Disney movies there can be scary moments in Disney attractions as well. You know you have the classic Disney evil villains, ghosts, skeletons, witches and other scary creatures. While Disney is known for their happy endings in their story telling you can still encounter intense moments that may frighten young ones. In order to help we have created a reference list of Disney World rides that may be too scary for kids.

Since every child is different we are going to break down each ride which has fright potential. So we are leaving it up to you to truly decide what is best for your child and how they will handle each ride. 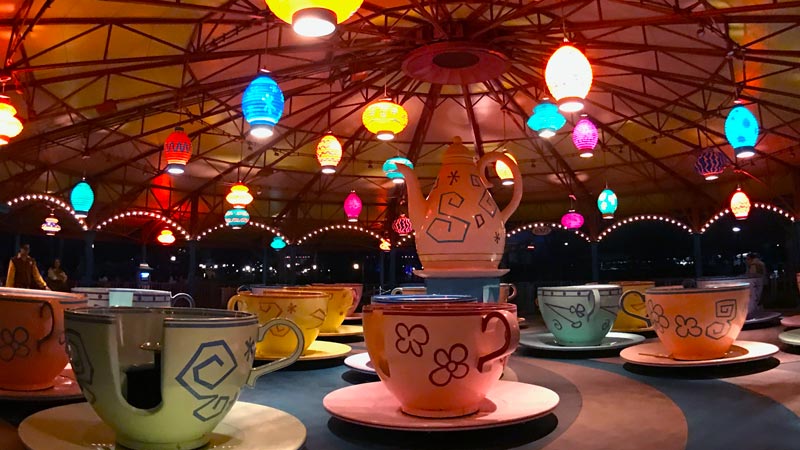 Jungle Cruise – This is a good test attraction for little ones. There is an abandoned dark tunnel towards the end that includes creepy crawly and several other spots throughout the ride that includes skeletons.

Pirates of the Caribbean – This a dark ride that includes some gruesome sights. As well there is a short unexpected drop in the beginning of the ride. Walt Disney’s Enchanted Tiki Room – There is a loud thunderstorm and dark scene towards the end of this show.

Big Thunder Mountain Railroad – This ride is known as the wildest ride in the wilderness! So that says a lot about it as is. There is also a height restriction of 40″.

The Haunted Mansion – The name alone should give away that this attraction features ghosts. It is also in the dark with elements that unexpectedly pop out at you. Despite all this the ride itself is slow moving and very gentle.

The Barnstormer – This is an entry level roller coaster. A great way to test if your child is ready for some of the bigger ones at Disney World. The height requirement is 35″.

Mad Tea Party – This one made the list for it’s endless spinning. It affects young and old alike.

The Many Adventures of Winnie the Pooh – Some younger kids get frightened on this ride. I blame those heffalumps and wozzles, it always gave me nightmares as a kid.

Seven Dwarfs Mine Train – This is another mild roller coaster built for kids. It’s slightly more intense than Barnstormer. I recommend trying the Barnstormer first before heading on this ride. The height requirement for this ride is 38”.

Under the Sea with the Little Mermaid – A very mild attraction but the scene with Ursula can really scare some young ones. It comes right after you go through the Under the Sea song!
Astro Orbiter – This ride is just like Dumbo the Flying Elephant but one striking difference is the height. This ride sits above Tomorrowland so if your little ones or yourself are afraid of heights, then this is a ride best skipped!

Space Mountain – This is a high intensity roller coaster that is completely in the dark. The height requirement for this ride is 44” which probably means not many young kids are going to be able to ride this anyhow.

Stitches Great Escape – This one is only open seasonal now. Disney attempted to turn this ride into a more kid friendly experience but the reality is it isn’t. During this ride you get strapped into a seat, it becomes dark, and there are scary sights, sounds and smells. The height requirement is 40”

Soarin – This ride is really pretty tame but it involves some pretty steep heights. So again if you or your young ones hate heights I would skip over this attraction. The height requirement for this attraction is 40″.

Mission Space – If you embark on the orange mission you will be strapped in for a flight into space. During the mission you will get to feel the full G Force that an astronaut does! Fortunately, there is a less intense green mission which is way more tame than it’s counterpart. You will still be confined in a tight space and harnessed in. The height requirement for this ride is 40”.

The Seas with Nemo and Friends – This rather tame ride made the list for a brief scary scene with a fish that is then followed by some familiar but potentially scary shark friends.

Spaceship Earth – This slow moving ride is pretty tame for the most part. It does have several dark parts though. It’s probably best to prep your kids before you jump on this ride. It’s a slow moving ride that goes though the history of communication on Earth.

Test Track – If your kids are used to some wild and crazy driving then there won’t be any issue here. Expect sudden stops and turns along with some high speed driving. This attraction has a 40” height requirement.

Fantasmic – This outdoor theater show happens at night overlooking the lagoon. It features several Disney Villains which may be scary for some younger kids. Be sure to prep your kid beforehand that there may be some scary characters but reassure them that it’s just pretend.

Rock n Roller Coaster – This is a high speed intense roller coaster. It’s located inside a building so the drops aren’t as big as the Tower of Terror next door. The high speed coaster features drops, corkscrews, inverted loops, twists and turns! Hold off on taking your kids until the have a couple of other roller coaster under their belt. The height restriction for this ride is 48″.

Twilight Zone Tower of Terror – What could be scary about a ride that randomly can drop 13 stories? Before you even get to the dropping portion of the ride you enter the twilight zone which can add to fear. The Tower of Terror is classified in the intense category. This ride only has a 40″ height requirement.

Star Tours The Adventure Continues – This is a 3D simulator attraction. If your kids didn’t handle the Star Wars movies well then this is definitely a good one to pass. The height requirements for this attraction is 40″.

Voyage of the Little Mermaid – This show makes the list for the Ursula which is rarely a fan favorite of any young kid.

It’s Tough to be a Bug – This is in a theater but it contains several effects that scare kids. The theater gets very dark and also features bugs. During the show spiders will drop from the ceiling as well as some bugs that will crawl on your seat! If your kids aren’t crazy about bugs I recommend skipping this one or sitting near the door.

Expedition Everest – This one is another high speed roller coaster that looks intimidating from the outside. This is the most intense ride at Animal Kingdom not just because it’s a roller coaster but the big scary yeti inside that’s ready to scoop down and grab you has something to do with it. This attraction has a height requirement of 44″.


Kilimanjaro Safari – This is a pretty slow moving ride through the animals of Africa. It makes the list because their is one part of the ride where you cross an old bridge and there is sudden shaking, like it’s going to break. If you venture on a nighttime safari there are quite a few parts that get very dark was well as some spooky bug noises. Dinosaur – This ride I remember struggling on as a kid. It’s loud and in the dark. It feature lots of large dinosaurs that are out to eat you as a snack! Many of the dinosaurs appear suddenly. This attraction has a height requirement of 40″.

Primeval Whirl – Another roller coaster attraction. You can see the whole ride from the exterior so you can get the jist of what to expect. There is lots of spinning and sudden drops. This attraction has a height requirement of 48″.

Avatar: Flight of Passage – This is a highly submersive simulator experience. It’s feels extremely real and contains large simulated drops and scary creatures. The height requirement for this ride is 44″.

How to Handle it When Things get to Scary

If you have any suspicions that your kid may get scared on any of the above listed rides, show them videos or tell them how the attraction will go. By showing them the videos this alleviates any big surprises! If videos are not enough, you can buy a tour book designed for kids, by kids like Birnbaum’s Walt Disney World for Kids book which has pictures and ride ratings.

For more tips on brining kids to Disney World read

Best Places to Eat with Kids at Disney World

All the Ways you Can Save Money at Disney

Videos do not do justice, as they don't capture the full experience or what it's truly like. Even if wimps could finally handle roller coasters after watching videos, doesn't mean they will when they go to the parks and experience them in person. It's great to get a good idea, but it's still no justice. Although I'm not a wimp, as I've been on every coaster at Magic Kingdom during my Magic Kingdom trip, I've realized that videos don't capture the true experience. The tip is to start out with the smaller coasters first to see how you feel about them, and if you start the big ones first, like Expedition Everest for example, you might never want to go on another one again.