There is a new bus in town, well actually it’s not a bus, it’s the new Disney Skyliner. If you aren’t sure what the Skyliner is, it’s a gondola system that will take you to select locations around Walt Disney World. The biggest news so far is that Disney Skyliner will be ready to begin transporting guests at the Walt Disney World Resort beginning September 29, 2019! The Skyliner just like with the rest of Disney’s transportation is FREE to use. This new transportation option joins Disney’s current selection of buses, boats, trains, and monorails.

Where does the Disney Skyliner Travel To? 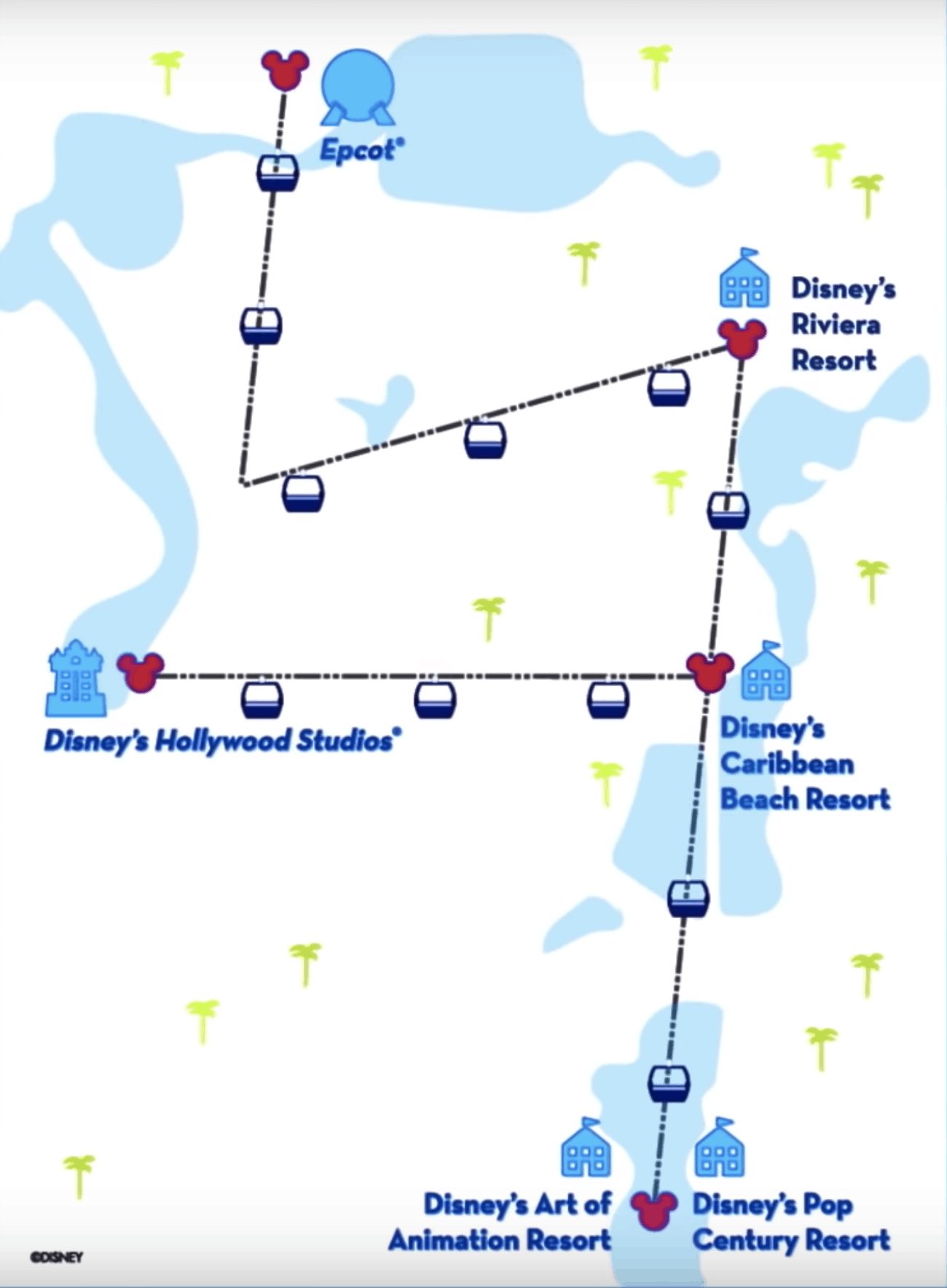 Epcot’s station is located at the back of the park. This is known as the International Gateway entrance. Previously this was just used by those staying or trying to get to the Epcot area resorts. Though there is a boat that you can take from there all the way to Hollywood Studios.

The Riviera Resort station is at the west end of the resort, adjacent to the Aruba section of Disney’s Caribbean Beach Resort. This will be an intermediate station on the Epcot line.

The Caribbean Beach Resort station is on the south of the resort entrance road, near the Jamaica section of the resort. This station will be the hub of the Skyliner, as the three individual lines to Epcot, Disney’s Hollywood Studios, and Art of Animation/Pop Century will all terminate and connect here.

The Hollywood Studios station conveniently puts you right outside the front of the park next to the existing bus stop. It’s actually one of the best drop off spots you can get at this theme park!

For the Art of Animation Resort and also Pop Century Resort a single station located on the bridge between the two resorts will act as the stop. I think this will be a great reminder to guests at these resorts that you can walk and experience the food and activities at both spots.

The cabins of the Disney Skyliner remind me of ski gondolas but with lots of character. What I am getting at is these cabins are going to feature your favorite Disney characters on the outside of select Disney Skyliner cabins. It will give the appearance of the character riding with guests. 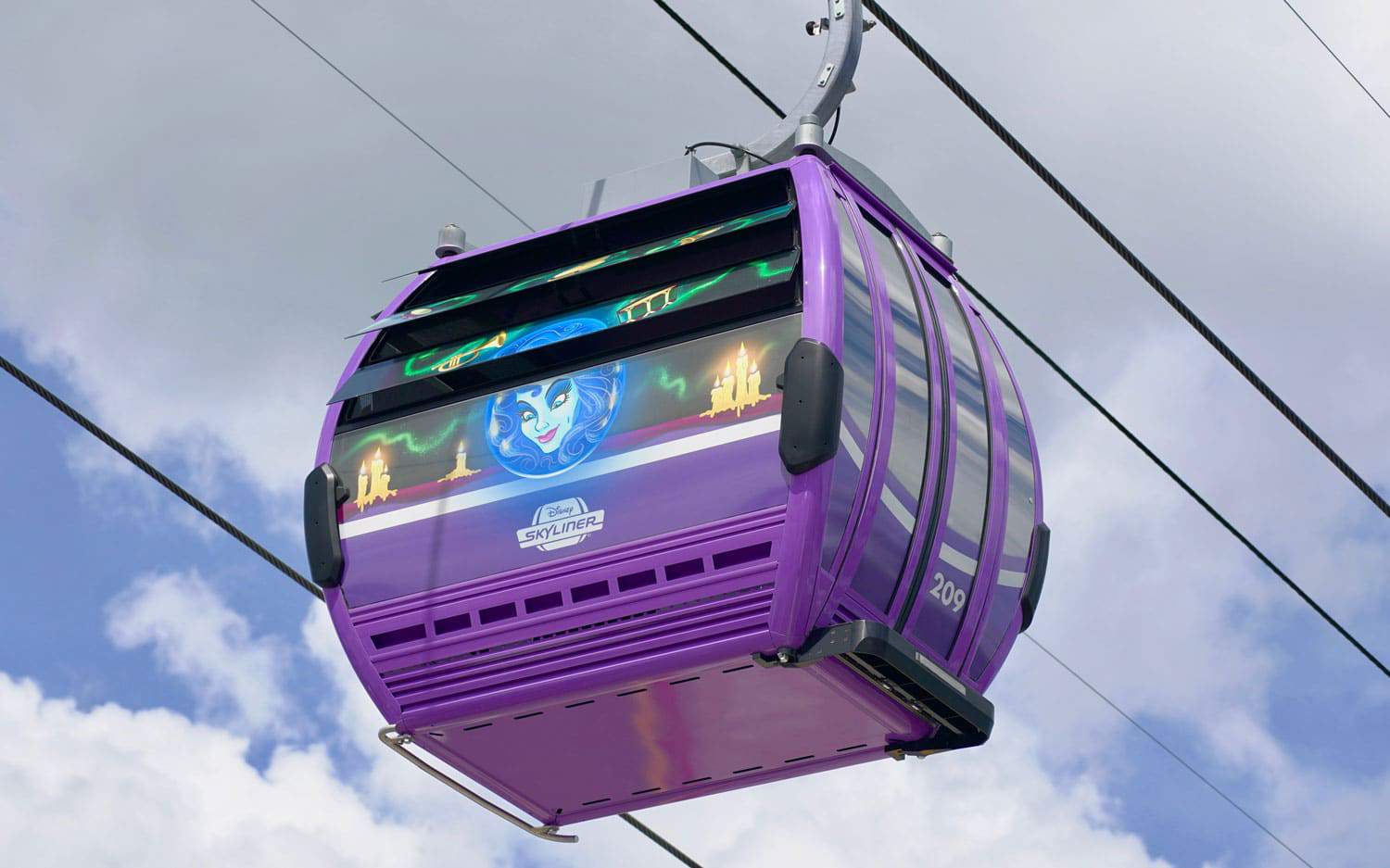 Some we have spotted so far include:

When this was first announced we weren’t sure what to expect. Many were thinking this would be very similar to the Magic Kingdom Skyway which closed in 1999. It appears to be far more sophisticated than that with a complete closed car. 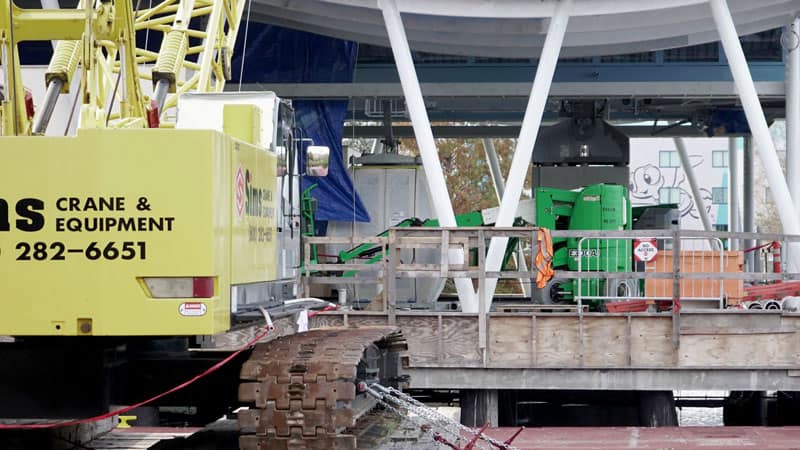 A look at a test gondola on the line. This is at the station between the Art of Animation and Pop Century.

The Benefits of the Disney Skyliner

Disney Skyliner will not only efficiently move you to your location, but it’ll also offer a whole new way to experience Walt Disney World with amazing views. Views that you can only catch from the sky. I sense a new trend of photos on Instagram!

For example, Disney is saying that when we arrive at the International Gateway station we will travel through the trees and be welcomed into Epcot with remarkable, never-before-seen views across World Showcase.

Fun Facts About the Disney Skyliner 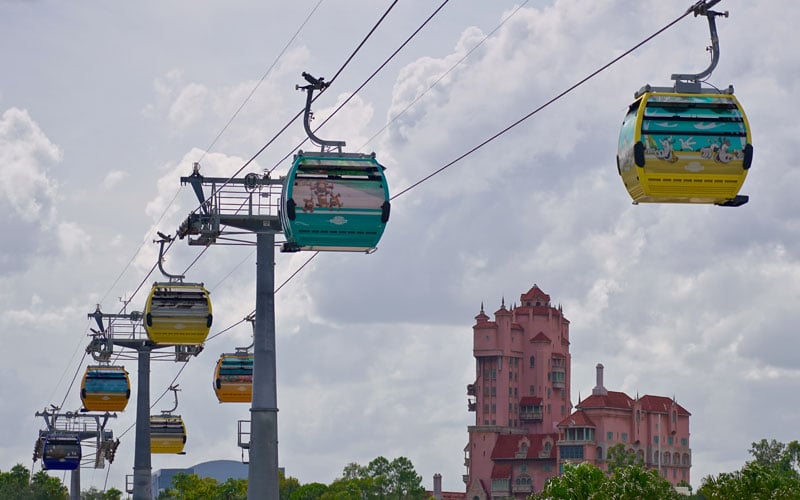 Here are some interesting facts that Disney has shared with us on the new Disney Skyliner.

Conclusion on the Disney World Skyliner

It’s exciting to watch this spider web of a system come to life. Without any air conditioning, I am interested to see how these units will fair when they open up later this month.