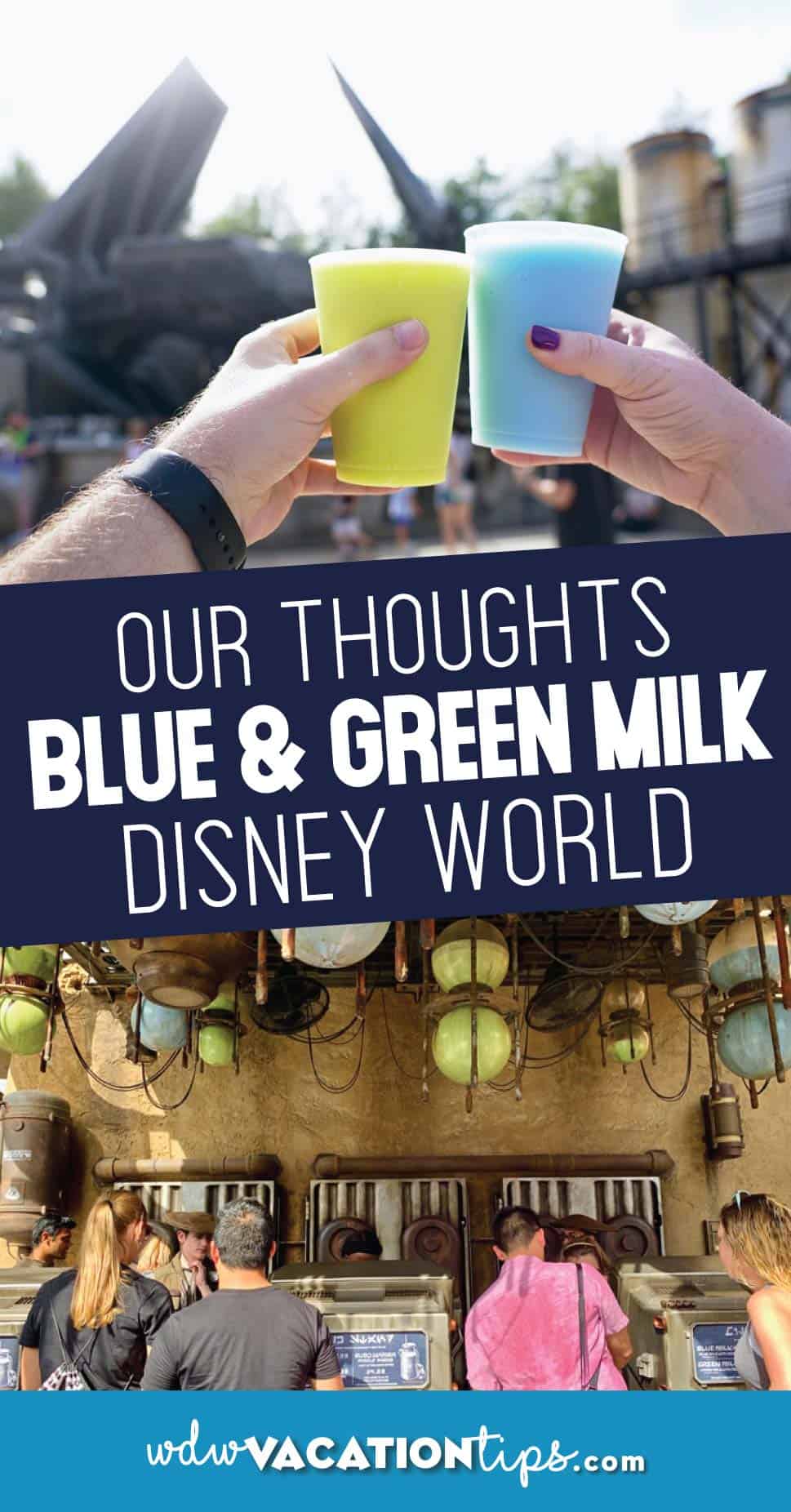 Of course, the hottest and most decisive drink in Batuu is Blue Milk and Green Milk! Both of these frozen concoctions at the Milk Stand are made with coconut milk and rice milk. I thought this was a nice touch since the drink is vegan and everybody from vegetarians to the cow milk intolerant can still have a glass! Plus in this Florida heat who wants to chug a glass of your standard milk? That sounds like a recipe for disaster. Between the two flavors of milk offered, they seem to have a polarizing effect, where you are either team blue or team green. So let’s find out which team you are on!

Ordering from the Milk Stand

The milk stand can be found in the back of Star Wars Galaxy’s Edge where the First Order hangs out.  It won’t be difficult to spot with the large blue and green orbs hanging from the ceiling. Here you can order your frozen milk in a standard cup (both $7.99 each) or get a souvenir Bubo Wamba Family Farm Light Up Sipper. The mega-sized sipper is priced at $24.99.

If you are looking to spike your drink, for $14 you can have alcoholic blue or green milk at Disney World’s Hollywood Studios! Rum comes with the Blue Milk and tequila for the Green Milk.

So when did Blue Milk first become a thing? This drink was spotted in 1977’s “A New Hope” where Luke Skywalker drank blue milk. The version of Blue Milk on Batuu has dragon fruit, pineapple, lime, and watermelon flavors. I thought this drink tasted like crushed blue sweet tarts. It was a perfectly chill drink for the hot day we were visiting though on the border of being overly sweet. Personally, I feel Blue Milk is going to be the more popular win for Galaxy’s Edge.

In Star Wars: The Last Jedi we got an eye of the Green Milk. Once again, a drink Luke Skywalker was spotted dinking. This time he was in self-exile on the planet Ahch-To. Here in Batuu, the Green Milk is a mix of mandarin orange, passion fruit, grapefruit, and orange blossom flavors. If you can get past the pungent smell you will be greeted with strong citrus flavors which I thought I would love, but just didn’t agree with my taste buds. Maybe it was the grapefruit since I typically shy away from that fruit?

I am personally on team blue, I could barely stand the sip I had of the green milk. Somehow my husband managed to polish off both drinks since I only had about half of my blue milk. Overall, this is a one and done drink for our family. We arrived on the planet of Batuu, got ourselves some Blue and Green Milk to try so we could say we had it and that’s all we needed. It’s nothing so delicious that I would shell out $7.99 each for again.