If you are looking to visit a water park on your Disney World vacation it can be a hard decision to pick between Blizzard Beach and Typhoon Lagoon. Fear not, we are here to help! If you’ve never been to either and want to know which Disney water park is for you, you’re in the right place. Of course, if you are planning a trip during the off-season (aka winter) you won’t have to worry about making a decision, Disney closes one down to perform yearly maintenance so be sure to check the refurbishment schedule before you go. 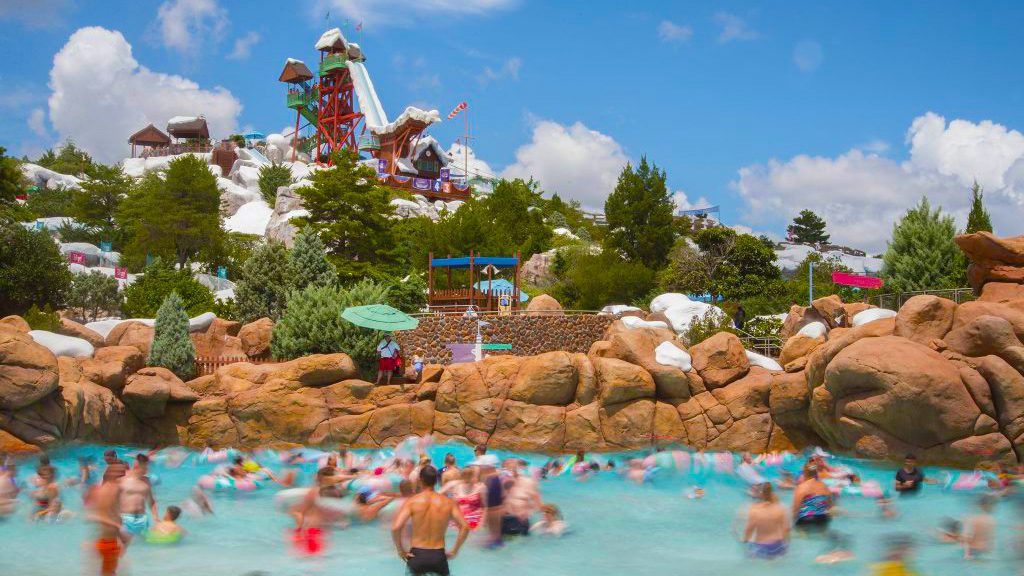 If Christmas is your jam this is your stop! Located over by Animal Kingdom Blizzard Beach has a unique story! During an extra cold Florida winter, an overzealous entrepreneur attempted to open a ski resort! Clearly, things didn’t quite go to plan, the sun came out and the ski resort started to melt and created what is now known as Blizzard Beach.

Blizzard beach is definitely one for the thrill the seekers, with 19 slides including the summit plummet that features a 120-foot free fall! 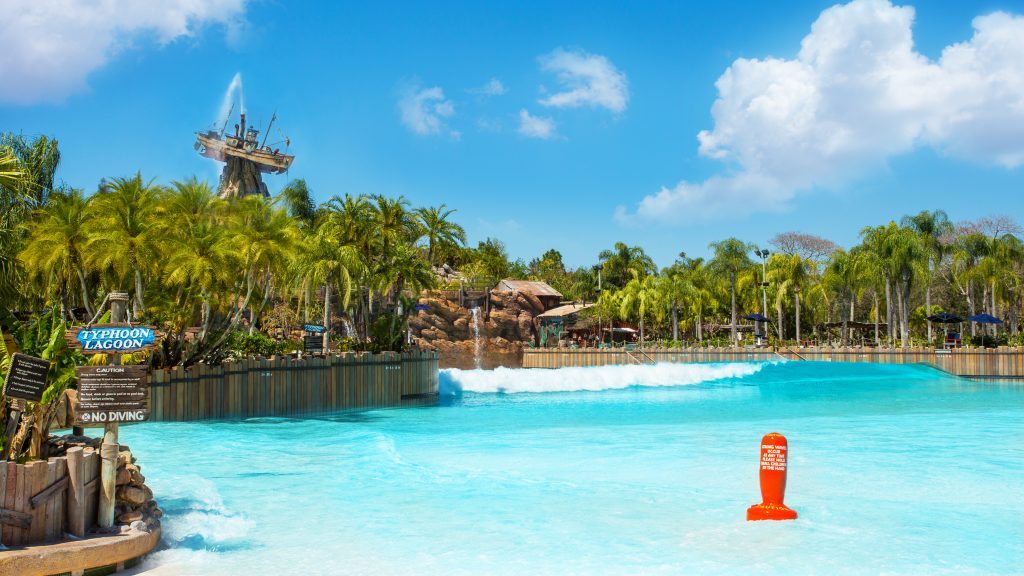 Tucked away by Disney Springs is the lost treasure of Typhoon Lagoon. The story goes that it was once a tropical resort on a sparkling lagoon. When a typhoon struck the resort ships were wrecked and sharks can now be found! The centerpiece of this resort is Miss Tilly’s Shrimp Boat which you will see stuck on the top of Mt. Mayday. This mountain kept trying to dislodge the boat with huge surges of water which in turn created waterfalls, rapids, surf, and pools!

The focal point of this water park is the 2.5-acre wave pool! But that isn’t all there is to do here, 12 water slides are also here along with a water coaster, Crush N’ Gusher.

It’s probably pretty clear who the winner is going to be here, Blizzard Beach takes the win with its clear focus on super fast water slides. The focal point of Blizzard Beach, summit plummet drops you straight down 120 feet. It’s definitely an accomplishment if you can survive this drop!

We have a landslide winner here! The Surf Pool at Typhoon is just so much better than Melt Away Bay at Blizzard Beach. What makes Typhoon Lagoon so much better you ask?

How about waves you can surf on? That’s right, at Typhoon Lagoon you can actually take surf lessons! The wave pool at Typhoon Lagoon is significantly larger the downside here is that with the periodic larger waves, it does require some extra swimming skill. Wondering when to catch the big swells? Check the chalkboard by the beach for all the details, it tends to be 30 minutes of small waves followed by 30 minutes of 6-foot waves!

As much as I love the food at Disney the food in their water parks is nothing to write home about. It’s pretty standard fare of burgers and fries and chicken nuggets at both Disney water parks. Honestly, I don’t think the finer dining will be missed at the water parks. You are spending the day running around from pool to pool and stay pretty wet! Doesn’t really set the mood for wanting to hang around for a big meal.

Great news for those of you on the Disney Dining Plan you can use your quick service credits here. Note that your resort mugs that are included with the dining plan don’t work here. But you can purchase a refillable water park cups that cost a little less than the resort ones at $9.99.

Since the food offerings are standard fare and only quick service at both places we are bringing this one at a tie since there is no clear winner.

Bringing kids along for the water parks? Great news! Each park has a kids only section Typhoon Lagoon has Ketchakiddee Creek while Blizzard Beach has Ski Patrol and Tike’s Peak.

Ski Patrol Training Camp at Blizzard Beach is for pre-teens who aren’t ready for the big slides. Some of the options here include water slides, a floating iceberg course, and a zip line!

Tike’s Peak at Blizzard Beach is geared toward young kids. In this area, you will find a snow-castle fountain, pop-up water jets and kid-sized slides in a shallow water area for little ones who are less than 48 inches tall.

Ketchakiddee Creek at Typhoon Lagoon is much like Tike’s Peak at Blizzard Beach.  The area features small slides, fun fountains, crawl tubes, waterfalls, a leaky tugboat and a mini ripply-rapids ride. There are 10 different activity areas with tons of fun for little ones who are less than 48 inches tall.

Blizzard Beach takes the crown on this one because it has two dedicated kids area and the options appeal to a wider range of ages.

If we look back to the beginning stories behind the two theme parks there is one that stands out as a little more plausible! Not only that but Typhoon Lagoon creates that relaxing tropical vibe and who doesn’t want to spend their day on a tropical island?

While Blizzard Beach is more heavily theme due to the nature of it’s story of a melting ski resort in Florida it’s just not as appealing as it involves lots of white concrete snow. Maybe I just spent too many years dealing with real blizzards that the thought of snow doesn’t seem as appealing. However, as a huge fan of Christmas, there is a lot that appeals to me at this park.

In the end, lush tropical island feel wins in our book!

Ah! That feeling a nice calm breeze while gently float down a calm river. This makes me wish I was on a lazy river right now! Lazy rivers are a key staple to just about every water park and Disney, of course, made sure to include one in each of their water parks. Both lazy rivers circle their respective water park and feature waterfalls, caves and other attractions to keep it from just being a gently moving circle of water. You can’t really go wrong with either which is why we are making this one a tie.

So which do you choose in the Blizzard Beach Versus Typhoon Lagoon showdown?

We tend to favor Typhoon Lagoon! But we love both. I do agree that Blizzard Beach has better play areas for kids. We have this hilarious video of our 4 year old doing the zip line 😂

It's really so hard to choose though, for real. Great post!