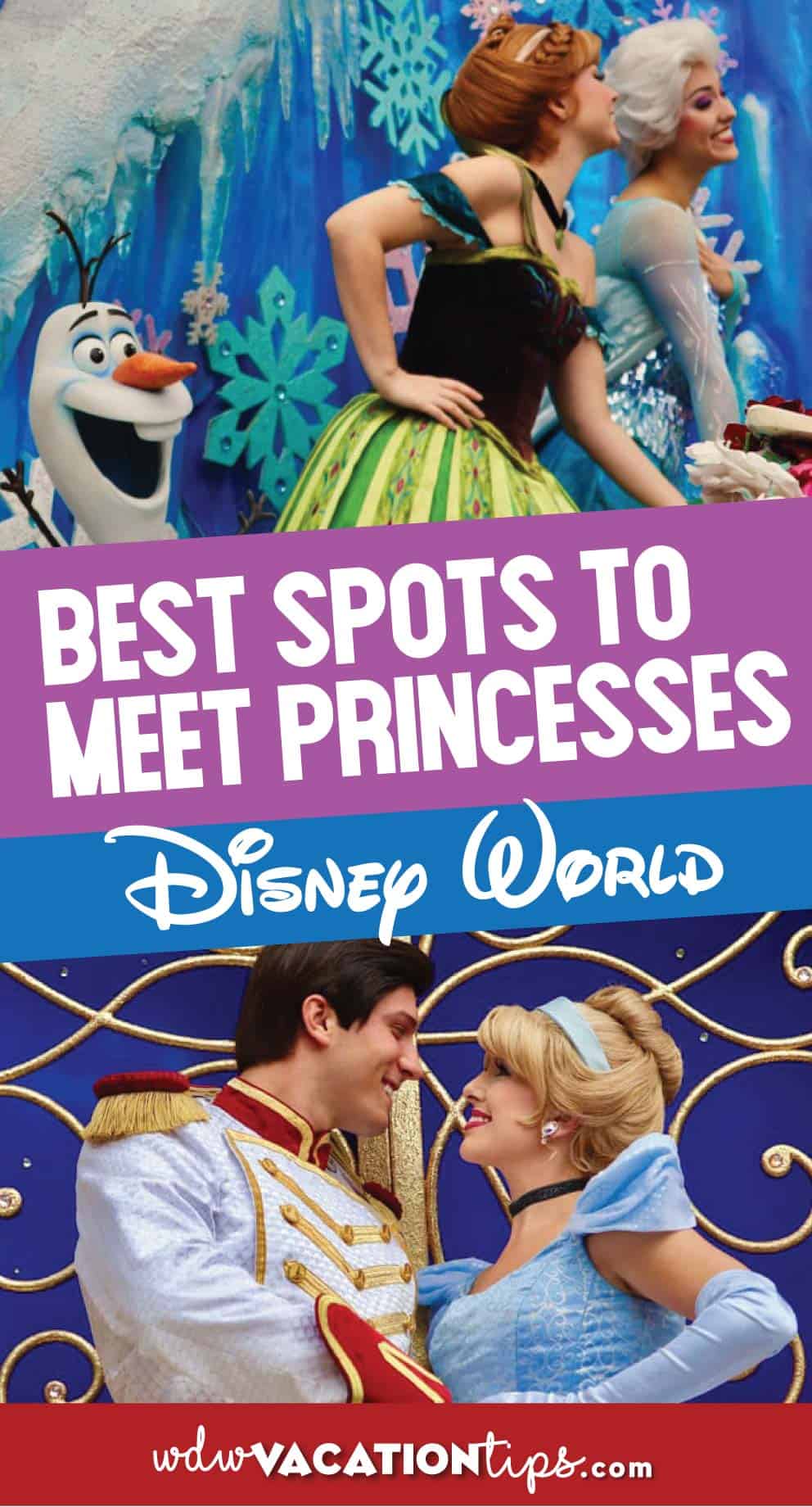 There she is… the courageous princess that fled her evil stepmother. The princess that braved going into the woods, befriended the unlikely dwarfs and won over her people.  Yes, it is Snow White. Meeting with Snow White or any of the many Disney princesses is a magical experience. Each princess takes time to talk to all her guests and makes them feel special and the experience one of a kind.

Disney World is a huge place and for beginners, it is easy to get overwhelmed with what to see, where to go, and how to get everything done. It takes some planning to get the most out of a day at Disney World. One of the best things to plan ahead is your meet and greats with many of the Disney characters such as the princesses. Although you can see the princesses in parades and night shows, children and adults alike love to have the chance to actually speak them. There are many ways to meet the princesses at Disney World such as though interactive storytimes, eating experiences, or simply by waiting in line to see each princess.

Standard princess meet and greets occurs for short periods of time and can vary depending on the day. Major princess greetings are those that occur for almost the whole day every day. These you can also obtain a FastPass+ ticket for. Lastly, character meals can be reserved ahead of time, and you have the joy of eating your meal as princesses come to your table.

One of the best stops to spot Belle is at Enchanted Tales with Belle at Magic Kingdom. Here you can participate in a story time adventure with Belle before getting to greet her and earn a bookmark. There are long wait times for this experience. However on a positive note you can get a Fast Pass+ to this attraction so you don’t have to wait in long times.

If you wish to join Belle for a meal you can find her at Cinderella’s Royal Table most days. However, it is not a guarantee as the princesses rotate each day at this location.

Another eating experience would be at Princess Storybook Dining at Akershus Royal Banquet Hall at the Norway Pavilion. She is typically near the entrance on days she is present at this location.

Lastly, you can also see Belle at her autograph station near the France Pavilion in Epcot. Many times Beast will also be with her to take pictures and sign autographs.

Rapunzel in the last year has become easier to spot at Disney World. She has her own Rapunzel meet and greet at Fairytale Hall in Fantasyland at the Magic Kingdom. Luckily you can get a FastPass+ to this experience.

Outside of the parks, you can enjoy a mouthwatering breakfast at Trattoria al Forno called Bon Voyage Adventure Breakfast. As you are eating, many characters such as Rapunzel will come to your table to chat, snap a photo, and sign an autograph.

On rare occasions Rapunzel has been spotted on the side walkways near Cinderella’s Castle as an impromptu meet and greet experience. Additionally, she sometimes pops up near her Fantasyland near her home. Also known as the Tangled toilet area near the Haunted Mansion. While over there don’t miss out on hunting for hidden Pascals.

Mulan’s main location is at Epcot’s China Pavilion near the water garden or next to the Temple. Lines are generally not long so she tends to take more time with her guests to chat.

One of the best locations to meet Cinderella is at the Princess Fairytale Hall in Fantasyland in Magic Kingdom. Please consider getting a FastPass+ for this meet and greet as the lines are generally very long.

Cinderella is one of the only princesses that is typically present at all princess meal experiences. Of course Cinderella can be seen at her character meal experience called Cinderella’s Royal Table Princess meals. She will go up to her guests to talk, take photos, and sign autographs. Many other princess will also accompany her at this location.

She can also be found at Cinderella’s Happily Ever After Dinner at 1900 Park Fare at Disney’s Grand Floridian Resort. Many of her movie castmates will be present at this meal. Lastly, she can be found at the Norway Pavilion in Epcot at the Princess Storybook Dining at Akershus Royal Banquet Hall. However, it is rare that she is often here.

The fairest of them all, Snow White, can also be found at the Princess Fairytale Hall in Fantasyland in Magic Kingdom as many of the other princess. FastPass+ is available to get you through the lines faster. Occasionally, Snow White will pop up at the Town Square Theater Porch in Magic Kingdom. This is located near the entrance of the park. Lastly, Snow White loves to meet her guests at the Germany Pavilion in Epcot

Snow White often makes appearances at Cinderella’s Royal Table meal as well as in Epcot’s Norway Pavilion for the Princess Storybook Dining at Akerskus Royal Banquet Hall. Unlike other meal experience where she occasionally is seen, you can be sure to find her at Disney’s Wilderness Resort at her very own Storybook Dining at Artist Point. Dopey, Grumpy and the Evil Queen will also be at this magical meal. Something very special about this experience is that all the food is themed to go along with the movie.

The Grand Floridian has many eating experiences with princesses. A great place to see Aurora is at the Grand Floridian’s Garden View Tea Room. This experience is jammed packed and worth the hefty price. Guest get a fabulous tea party, stories, sing-alongs, princess parade, and a delicious lunch. Children also will get a special Aurora themed gift such as a doll, crown, and/or a Disney bear. Additionally, Aurora can be occasionally seen at Cinderella’s Royal Table Princess Meal in Magic Kingdom and at Princess Story Dinning at Akershus Royal Banquet Hall in Epcot’s Norway Pavilion.

Another way to meet Aurora is at the France Pavilion at Epcot or at Princess Fairytale Hall at Magic Kingdom.

Princess Jasmine’s main location is at Adventureland at Magic Kingdom near the Magic Carpet ride at the Agrabah Bazaar. She and Aladdin greet their many fans here. The line sometimes can get long. However, she is also at Epcot in the Morocco Pavilion.

Pocahontas is difficult to locate at Disney World. She can be seen at her very own meet and greet at Disney’s Animal Kingdom at Discovery Island Trails. However, she also has been known to be seen near the entrance of the park to meet with guests and to take a quick photo.

Tiana can be seen near Liberty Square Bridge in magic Kingdom. However, she is not there every day so she is most likely the hardest princess to locate. She is present at Tiana’s Riverboat Party, though. Guests enjoy an ice cream social with Tiana and Naveen on the dock in Frontierland aboard the Liberty Square Riverboat. However, Disney has plans to possibly change the theme of the iconic Splash Mountain ride to feature The Princess and the Frog. If that occurs, you can almost be certain there will be a standard meet and great for Tiana and Naveen set up in the park.

Anna and Elsa can be found at the Frozen Sing Along in Disney’s Hollywood Studios. You get to see a whole show and sing along to the beloved songs we all know and love. These two Arendelle princesses can also be found in Epcot at the Norway Pavilion. Strangely enough Anna and Elsa can’t be found at any of the character meals at this time.

Ariel can be found at Ariel’s Grotto in Fantasyland at Magic Kingdom right next to her Under the Sea ride. There is a FastPass+ available for this meet and greet which I would recommend since the lines get very long during the day. The line is slightly shorter in the evening.

Ariel and Prince Eric can be seen at the Trattoria al Forno at Disney’s BoardWalk for Bon Voyage Adventure Breakfast. Ariel also is sometimes in her human form to greet guests at Cinderella’s Royal Table in Magic Kingdom and at the Princess Storybook Dining at Akerskus Royal Banquet Hall in Epcot.

When navigating your princess quest make sure to take note that princesses take time with each of their guests so lines do move slowly. A secret tip is to line up prior to when they are scheduled at their meet and greet location. A good 15 to 20 minutes would be ideal. Also, cast members will start to cut off the line if it is nearing the end of the princesses allotted time to meet guests. So if a princess is scheduled to be in Norway till 1:00 p.m. make sure to get to the location at least 10 minutes prior to ensure the line is not cut off.

For meal experiences with princesses you can make reservations 180 days out. That is highly recommended for all these princess encounters as they book up fast.

The parks recently reopened with some major restrictions. Basically all ticketed events have been canceled such as dining packages and dessert parties. FastPass+ has been suspended at the current time but plans to come back in some form. Character meet and greets have also been suspended. Princesses and other characters can be seen during random pop up parades and can be seen on the railroad stop at Magic Kingdom for example.