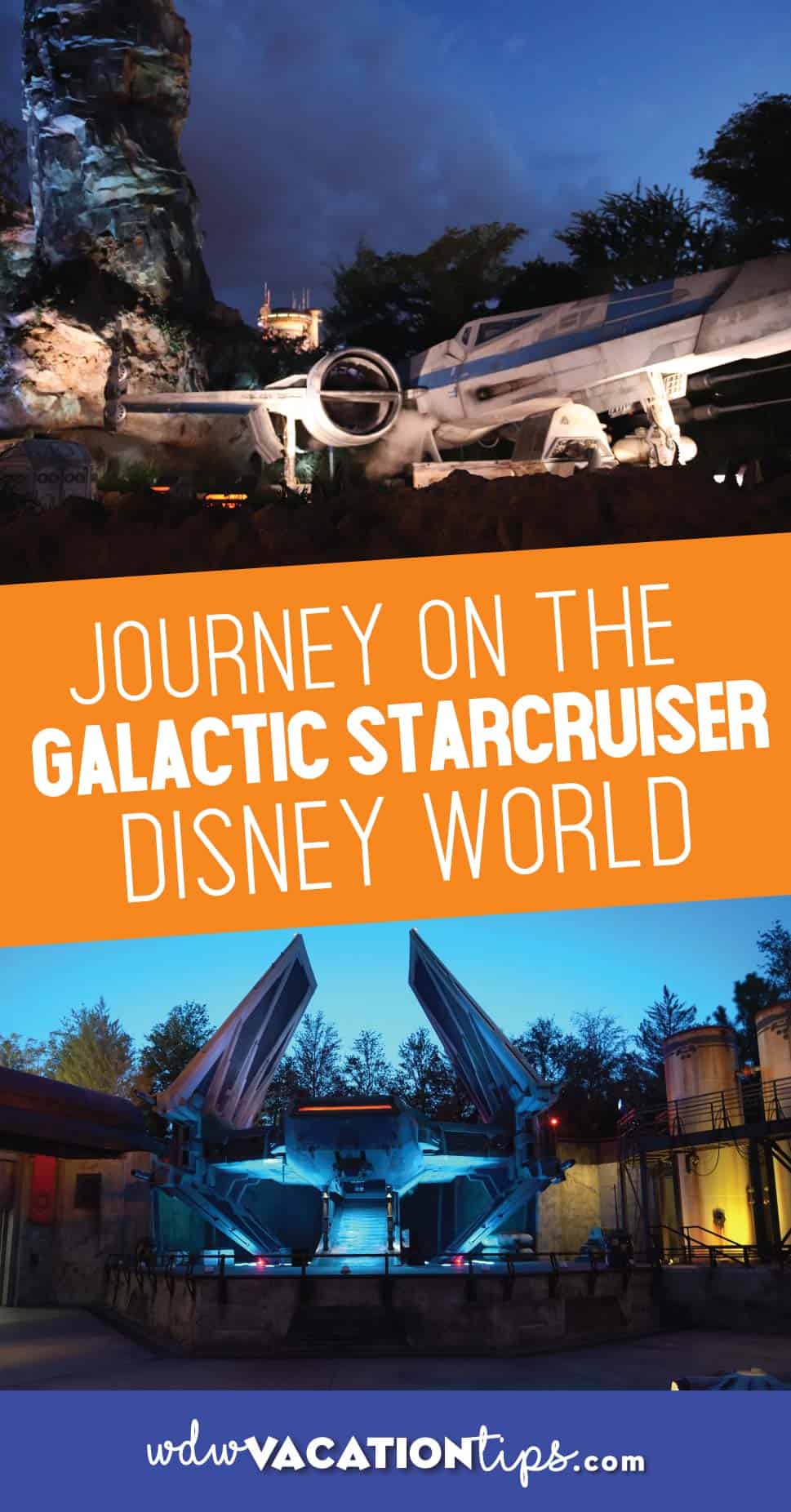 Star Wars: Galactic Starcruiser will fully immerse guests in a galaxy far, far away when it debuts in 2022 at Walt Disney World Resort in Florida, going beyond anything Disney has ever created before. As part of this first-of-its-kind vacation experience, guests become the heroes of their own stories during a two-day, two-night adventure where they see, feel and live Star Wars. Unlike any typical cruise, though, you can become the heroes of your own Star Wars story in a new type of immersive experience that only Disney could create.

You will cruise the galaxy in style aboard the Halcyon, known for its impeccable service and exotic destinations. Onboard, you will stay in well-appointed cabins, experience onboard dining, make a planet-side excursion to Black Spire Outpost on Batuu, and much more. Throughout the journey, you will be invited to delve deeper into your personal adventure by participating in onboard activities, interacting with characters, crew, other passengers you meet, and becoming part of the action and the broader Star Wars saga.

Star Wars: Galactic Starcruiser invites guests into a new kind of “storyliving” as they travel the galaxy in style aboard the glamorous Halcyon starcruiser, known for its impeccable service and exotic destinations. They will stay in well-appointed cabins, experience exquisite dining and out-of-this-world entertainment, visit Star Wars: Galaxy’s Edge at Disney’s Hollywood Studios, and much more.

Throughout the journey, guests’ choices will determine their personal adventures by interacting with characters, crew and other passengers they meet as they become part of the action and the broader Star Wars saga. Decisions guests make will determine how their individual stories unfold as they seize control of their destinies – and potentially impact the fate of the galaxy.

How to Get Onboard the Halcyon

The adventure begins when you arrive at the Galactic Starcruiser Terminal at Walt Disney World and check-in for your two-night experience.

You will be invited to enter a Launch Pod for transport into space. Through the windows above you in the pod, you’ll see yourself leave the real world behind as you jump to hyperspace and draw closer and closer to the Halcyon.

What to Expect during your Stay on the Halcyon

A visit aboard the Halcyon starcruiser plunges guests into a multi-day, interactive story that interweaves with members of the crew, other passengers, familiar Star Wars characters and others. Guests may encounter the starcruiser’s strong and charismatic captain, the ship’s plucky mechanic, heroes of the Resistance or many more as they choose alliances and chart their courses.

At Star Wars: Galactic Starcruiser, both children and adults will have the opportunity to face off against a training remote while wielding a lightsaber like Luke Skywalker did as he was learning to use The Force.

Plus visiting the starcruiser’s Bridge to learn about ship systems and how to operate them, including navigation and defense. These are skills that may come in handy during a journey through this adventure-filled galaxy.

The all-immersive experience features enthralling onboard activities, such as:

Learning the ancient ways of the lightsaber and facing off against a training remote, where guests may discover their own connection with the Force.

Dining on the Galactic Starcruiser

Guests will find refreshment each day in an enticing supper club known as the Crown of Corellia Dining Room. This bright and welcoming hall will offer breakfast and lunch daily to passengers before transitioning each evening into a lavish multi-course menu of both otherworldly and familiar origins.

One night’s dinner will feature a live performance from a galactic superstar who can captivate an entire room with the crook of her jewel-encrusted purple Twi’lek finger.

The journey also includes an excursion to Batuu, where guests can explore the winding pathways of Black Spire Outpost and seek out a hidden Resistance base.

Every window in the Halcyon, including those in each cabin, has a view of the galaxy beyond! With ever-changing vistas as the ship progresses from place to place.

You’ll be able to explore the Halcyon and perhaps discover hidden spaces deep in the mechanics of the ship. This is perfect for uncovering secrets … or holding secret meetings.

Choices you make during your adventure will help determine how your Star Wars story progresses.