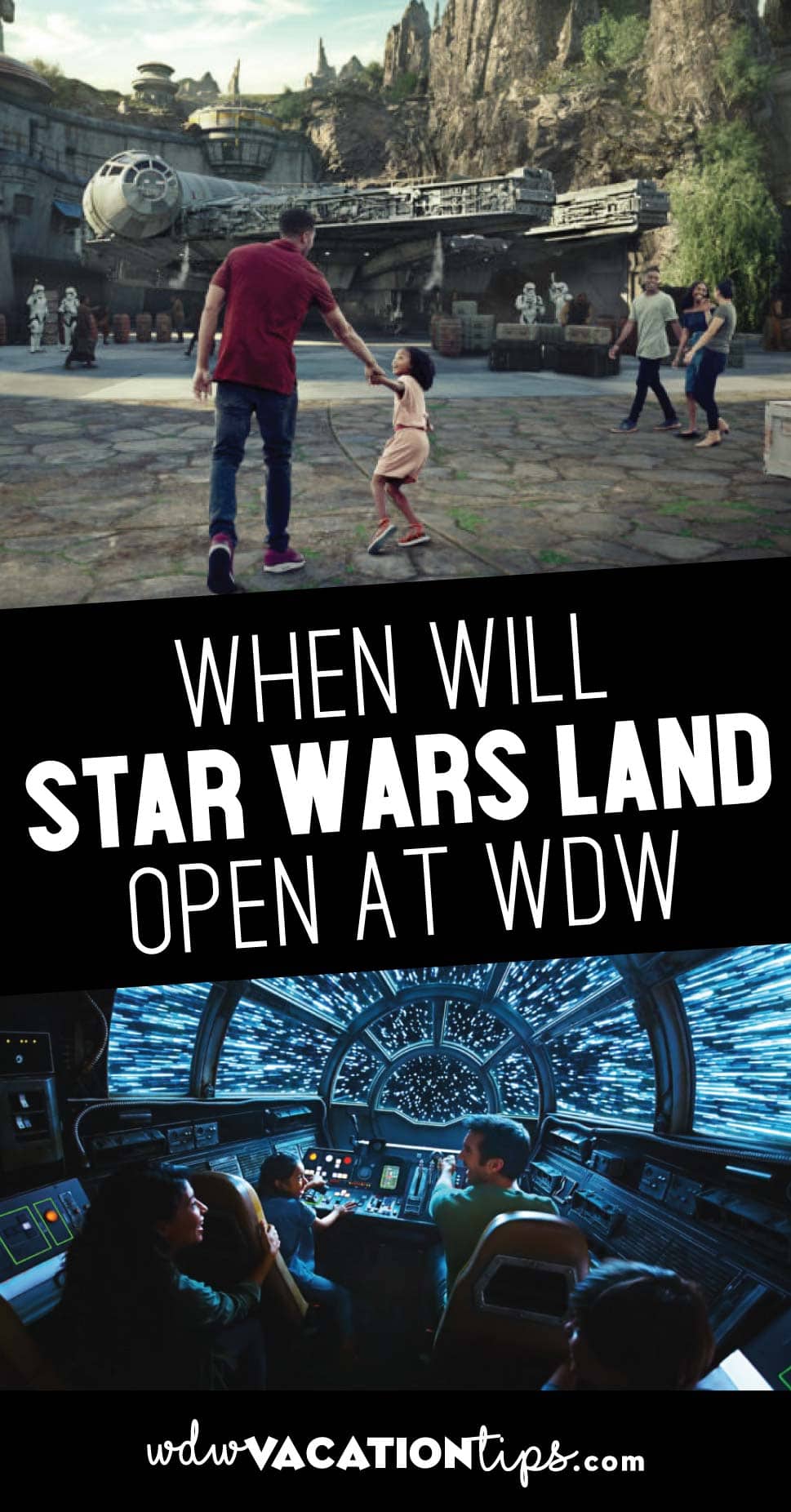 In anticipation of high interest, Disney Parks, Experiences and Products announced today it will open Star Wars: Galaxy’s Edge ahead of schedule! How rare is this type of announcement for Disney? So the official date is May 31 at Disneyland Park in California and at Disney’s Hollywood Studios at Walt Disney World Resort in Florida on Aug. 29. 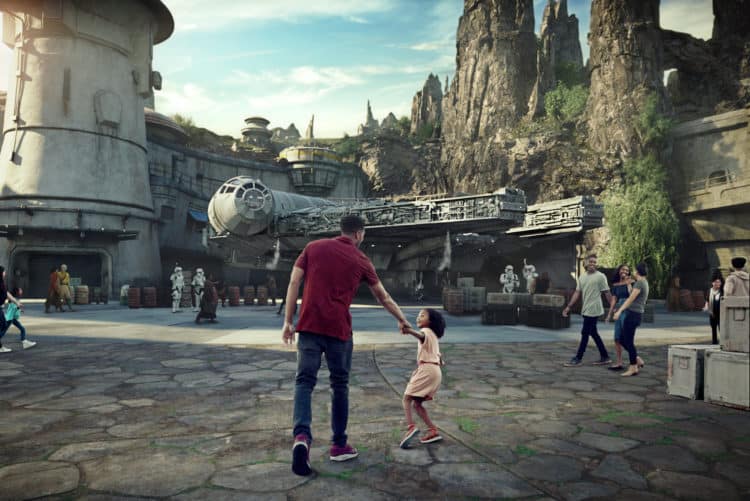 On opening day for phase one, you will be transported to the remote planet of Batuu, full of unique sights, sounds, smells and tastes. Guests can become part of the story as they sample galactic food and beverages, explore an intriguing collection of merchant shops and take the controls of the most famous ship in the galaxy aboard Millennium Falcon: Smugglers Run.

Guests planning to visit Star Wars: Galaxy’s Edge at Disneyland Park between May 31 and June 23, 2019, will need valid theme park admission and will be required to make a no-cost reservation, subject to availability, to access the land. Information on how to make a reservation will be available at a later date on Disneyland.com and the Disney Parks Blog.

Guests staying at one of the three Disneyland Resort hotels during these dates will receive a designated reservation to access Star Wars: Galaxy’s Edge during their stay (one reservation per registered guest); valid theme park admission is required.

Phase two, opening later this year, will be Star Wars: Rise of the Resistance, the most ambitious, immersive and advanced attraction ever imagined, which will place guests in the middle of a climactic battle between the First Order and the Resistance and will blur the lines between fantasy and reality. In light of tremendous demand, Disney made the decision to open the land in phases. This was to allow you to sooner enjoy the one-of-a-kind experiences that make Star Wars: Galaxy’s Edge so spectacular.

Batuu is a far-flung destination along the galaxy’s Outer Rim, on the frontier of Wild Space. It is the uncharted region beyond all known star systems. Batuu is home to Black Spire Outpost, an infamous port for smugglers, traders, and adventurers wishing to avoid any unnecessary … entanglements with the First Order. Along the way, guests may encounter some familiar faces, from Rey, Finn, and Poe to BB-8 and Chewie.

Once guests step foot on Batuu, they will be part of the action as it unfolds around them, and their interactions with the Play Disney Parks mobile app* will deepen their engagement with the land. They may choose to aid a smuggler, join the Resistance or pledge their loyalty to the First Order.

In this all-new environment, you can make choices about their experience that could impact their adventures as they travel throughout the land by using the Play Disney Parks mobile app in a whole new way. This depth of storytelling is part of the total immersion that will distinguish the two, 14-acre lands from any other themed land in history. Plus this is the largest and most technologically advanced single-themed land expansions ever in a Disney park.

For more than four decades, Star Wars fans have imagined what it would be like to blast across the stars inside the Millennium Falcon or race through the halls of a Star Destroyer. Star Wars: Galaxy’s Edge will feature two signature attractions that turn those dreams into reality. 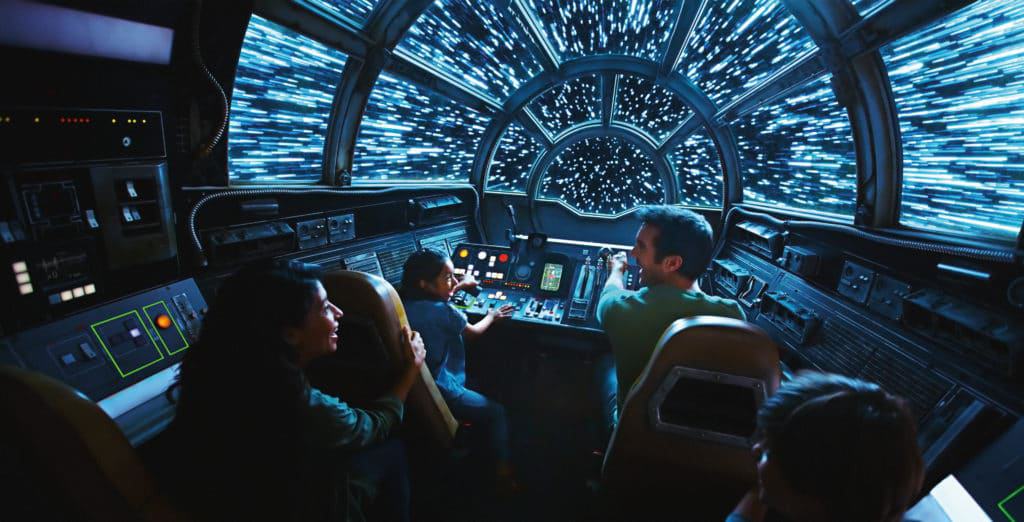 Set to open at Disneyland Resort on May 31 and at Walt Disney World Resort on Aug. 29, Millennium Falcon: Smugglers Run, will take guests into the cockpit of “the fastest hunk of junk in the galaxy.” They will take the controls of the Falcon in one of three unique and critical roles as the ship hurtles through space. Some will be pilots, some gunners, and some flight engineers, creating multiple ways for guests to experience the attraction.

Set to open later this year, Star Wars: Rise of the Resistance places guests right in the middle of the Rebellion and gives them an active role in the fight against the First Order, including a faceoff with Kylo Ren. Their journey takes them inside a full-size starship and aboard a nearby Star Destroyer.

What does Blue Milk actually taste like? That question and more will be answered when guests visit Star Wars: Galaxy’s Edge and experience the new land’s expansive array of food and beverages. Guests will walk through a bustling street market, where vendors offer various local delicacies, including an Outpost Mix of uniquely flavored popped grains from Kat Saka’s Kettle, a unique popcorn snack with a combination of sweet, savory and spicy flavors.

At Oga’s Cantina, even the blaster-bolt scorches on the walls tell a story. Here, guests will gather to share their tales from around the galaxy as they enjoy exotic beverages served in unique vessels and listen to spirited musical entertainment provided by DJ R-3X, otherwise known as Rex, the former Starspeeder 3000 pilot droid from the original Star Tours. Rex re-invents himself as the cantina’s DJ, and he’s as quirky and talkative as ever.

A multi-purpose transport shuttle docked on top of a large hangar will beckon guests into Docking Bay 7 Food and Cargo, a designated location for traveling food shuttles. Chef Strono “Cookie” Tuggs is in much demand for his culinary skills, so he moves from site to site in a modified Sienar-Chall Utilipede-Transport that becomes a mobile kitchen and restaurant. His travels across the galaxy allow him to fill his pantry with exotic ingredients he uses to make new and unusual dishes. He is proud to present Tuggs’ Grub, a “traveling diner for diners traveling,” inspired by dishes he created during his time working for Maz Kanata on Takodana. 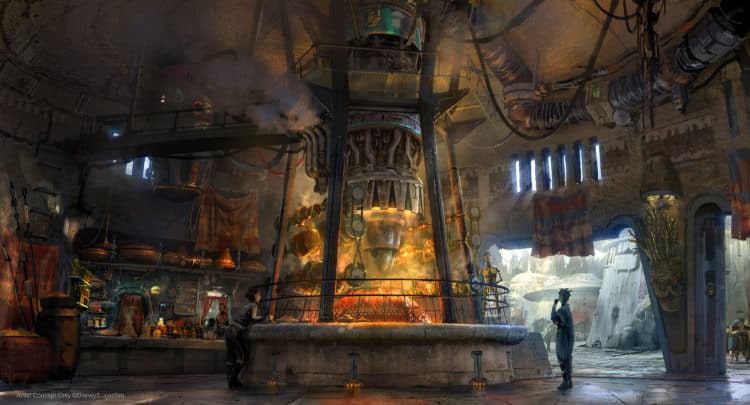 In the Black Spire Outpost market, Ronto Roasters will draw attention from passersby with its large engine firing up a barbecue pit for mouth-watering Ronto Wraps. When hungry customers queue up to order, they will encounter a former smelter droid, carefully turning the spit of meats. Guests will also be able to choose from a variety of exotic non-alcoholic drinks like the Sour Sarlacc or Tatooine Sunset.

Food is one of many discoveries just waiting to be made while wandering the lively market of Black Spire Outpost, where guests will encounter a robust collection of merchant shops and stalls filled with authentic Star Wars creations. 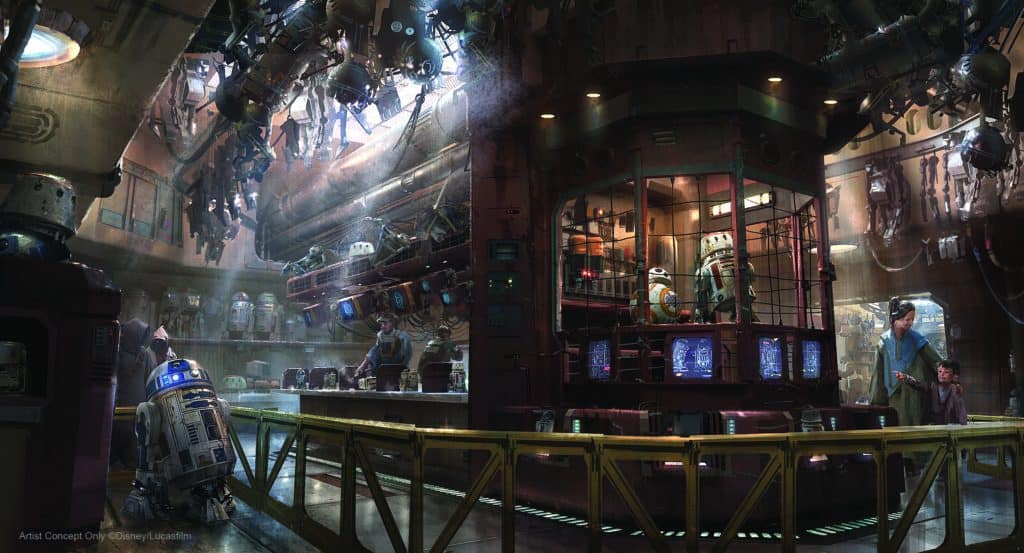 Droid Depot at Star Wars: Galaxy’s Edge, guests will be able to build their own personal droids. (Disney Parks)

The Droid Depot will invite guests to construct their own astromech droids. Patrons will pick pieces and parts off a conveyor belt to build one of two core models (R-series or BB-series) and they can customize their droids with various parts and colors. These droids will be capable of interacting with elements in the land. Additional programming chips and accessories can be added to further customize these new friends. In addition, the Droid Depot will offer pre-built droids, droid-inspired products and more.

At Savi’s Workshop – Handbuilt Lightsabers, guests will have the opportunity to customize and craft their very own lightsabers. In this mystical experience, guests will feel the Force as they build these elegant weapons from a more civilized age.

Inside Dok-Ondar’s Den of Antiquities, guests will find a selection of rare and mysterious items for sale representing different eras of the Star Wars galaxy, including holocrons, ancient Jedi and Sith artifacts, lightsabers and more. As they explore the nooks and crannies of the shop, guests will also see Dok at his desk as the large Ithorian checks his inventory, takes incoming calls and barks the occasional order at his assistants.

In addition to these special experiences, the Black Spire Outpost market will feature the Creature Stall dedicated to the plethora of rare and fascinating creatures that populate the galaxy, as well as Black Spire Outfitters, showcasing the latest in accessories. Guests will also find the Toydarian Toymaker, a stall full of toys crafted by a Toydarian (the flying alien species first seen in “Star Wars: Episode I – The Phantom Menace”).

Guests can also demonstrate where their loyalties lie with the gear and accessories they purchase within the land. Resistance Supply is a “makeshift” supply location at the Resistance’s hidden command area. The stall sells Resistance pins, badges, hats, and other accessories to help guests feel like part of the cause. First Order Cargo, meanwhile, is a temporary First Order storage dock near the market. Easily identified by a never-before-seen First Order TIE echelon, the cargo location will offer guests a chance to pledge their loyalty by purchasing pins, caps, gear, model ships and more.

Star Wars: Galaxy’s Edge is the first land within a Disney park designed to integrate with the Play Disney Parks mobile app, which debuted last year and offers interactive adventures and experiences that bring surrounding environments to life at Disneyland Resort and Walt Disney World Resort. When guests use the app, it will provide new opportunities for them to engage with the land, such as translating a galactic language, learning what’s hidden inside crates and containers, or accomplishing certain tasks by participating in missions.

Guests also can use the Play Disney Parks app to interact with a variety of elements in Star Wars: Galaxy’s Edge, such as droids, ships, media screens, door panels, and antenna arrays.

Music has been an integral part of Star Wars from the moment the iconic themes of Academy Award-winning® composer John Williams first introduced us to this galaxy. The music for Star Wars: Galaxy’s Edge continues that tradition with a suite of all-new Williams-composed themes written especially for the land and its attractions. Along with a collection of original cantina songs created by composers and songwriters from around the globe, this new music will deepen guests’ connection to the land as Williams complements and builds upon the iconic fanfares he created for the Star Wars films.

More details about Star Wars: Galaxy’s Edge will be released in the coming months. Visit DisneylandNews.com, WDWNews.com, DisneyParksBlog.com, and StarWars.com for the most up-to-date information. Let us know in the comment section below what you are most excited for!